These historical sites and national monuments are practically Disneyland for history buffs.

Singapore’s a bustling city for exciting events and activities. We’ve got amazing local food, pristine shopping spots and world-class architecture. But our little red dot is also rich in culture and heritage. Former fishing village or not, we’re mighty proud of our heritage. That’s why we’re sharing these stunning historical sites of Singapore that’ll have you beaming with #localpride. Oh, and if you’re a history buff who’s just visiting, you’re in for a treat.

We all know Haw Par Villa for its Hell’s Museum and kooky statues that leave nothing to the imagination. But have you ever heard its history? Let’s give you the lay of the land. Once known as Tiger Balm Gardens, the park was built by Myanmar-born businessman Aw Boon Haw for his brother. It was named after the Tiger Balm ointment that their father had created. However, when war broke out, the Aw family fled Singapore and the park ended up as an observation point by the Japanese army. Post-war, it was taken over by the Singapore Tourism Board, which revitalised the space.
Haw Par Villa, 262 Pasir Panjang Road, Singapore 118628

While it’s now home to popular watering holes, Emerald Hill and its glorious shophouses have a deep history. Although it was once stripped and exhausted of its rich land by Chinese immigrants, it was born again with lively Peranakan culture. During World War II, most of the terrace houses and shophouses were left vacant. After the war, hundreds used to queue along Emerald Hill to get their milk, which was doled out in controlled numbers due to a restriction on resources. It’s now a conservation area with heritage front facades maintained to create the iconic Emerald Hill we know today.

If you’ve ever been around Kent Ridge Park, you might’ve visited the commemoration plaque at carpark B. It was erected to mark the 50th anniversary of the end of World War II, and serves as a reminder of the courage and sacrifice of our soldiers. Kent Ridge Park was the site of the battle of Pasir Panjang, where the Japanese and British military fought over the waterfront and military depots, which were valuable resources. The intense two-day battle saw the regiment dwindling to only a few men. Some of whom braved flames in a drain of burning oil in a fight to resist surrendering (yikes). Now, you can find informative boards around the 47-hectare park on its history.
Kent Ridge Park, Vigilante Drive, Singapore 118176 Standing at 68m high, The Civilian War Memorial is hard to miss. This historical site in the city centre was built to commemorate the civilians killed during the Japanese occupation of Singapore. It houses 606 urns, which is thousands worth of unidentified civilians. The structure is fondly known as “The Chopsticks” but it actually signifies the unity of Singapore’s four major races.
The Civilian War Memorial, War Memorial Park, Beach Road, Singapore 189768

Situated in the north, the Kranji War Memorials consist of three cemeteries: Kranji War Cemetery, Kranji Military Cemetery and State Cemetery. The War Cemetery honours the fallen heroes of WWII with 4,461 gravestones lined up proudly on a slope. You also can’t ignore the Stone of Remembrance, which sets a solemn tone in the area. Scan through the inscribed names of over 24,346 soldiers and airmen who lost their lives during the war. Move along to the Military Cemetery where you’ll come across 1,400 burials, as well as our first and second presidents’ burials at the State Cemetery. Though a little off the beaten track, it’s truly well worth the visit.
Kranji War Memorials, 9 Woodlands Road, Singapore 738656

The first and oldest mosque in Singapore, Masjid Omar Kampong Melaka was a simple wooden structure with an attap roof in 1820. After a few rounds of rebuilding and the addition of the minaret in 1985, the mosque can now seat 1,000 people. And thanks to its strategic location, you’ll see plenty of office workers stopping by for their daily and Friday prayers.
Masjid Omar Kampong Melaka, 10 Keng Cheow Street, Singapore 059607

Thanks to worldwide coverage (we’re looking at you, Crazy Rich Asians), Lau Pa Sat has become one of the top places for tourists to visit in Singapore. As locals, we actually think the food lives up to its flavour and authenticity but it’s the buzzing atmosphere that takes the cake. The former market-turned-hawker-centre was built in the 19th century, making it one of the oldest in Singapore. Delish local eats aside, the building is famed for its unique octagonal structure, wrought iron filigree and historical elements including the clock tower, with a clock face on every side, and bells that chime every 15 minutes.
Lau Pa Sat, 18 Raffles Quay, Singapore 048582

Built in 1836, the oldest Anglican house of worship in Singapore (located in the middle of City Hall MRT and the National Gallery) is replete with interesting trivia. The original church featured a tower and spire but was unfortunately struck by lightning, which resulted in the closing of the church in 1852. It was also used as an emergency hospital, days before the Japanese Occupation. Today, St Andrew’s Cathedral is quite a sight with its Neo-gothic structure as well as stained-glass windows and various memorials and dedications located inside.
St Andrew’s Cathedral, 11 St Andrew’s Road, Singapore 178959

We love a good trip to Sentosa and if Fort Siloso isn’t on your agenda, you’re missing out. Built in the late 19th century, the area was used as part of Singapore’s defences during WWII. Today, it’s the only well-preserved coastal fort in the city. We visited Fort Siloso ourselves and uncovered a military fortress amongst other amazing discoveries from the past. Safe to say, we learnt a whole lot.
Fort Siloso, Siloso Road, Singapore 099981 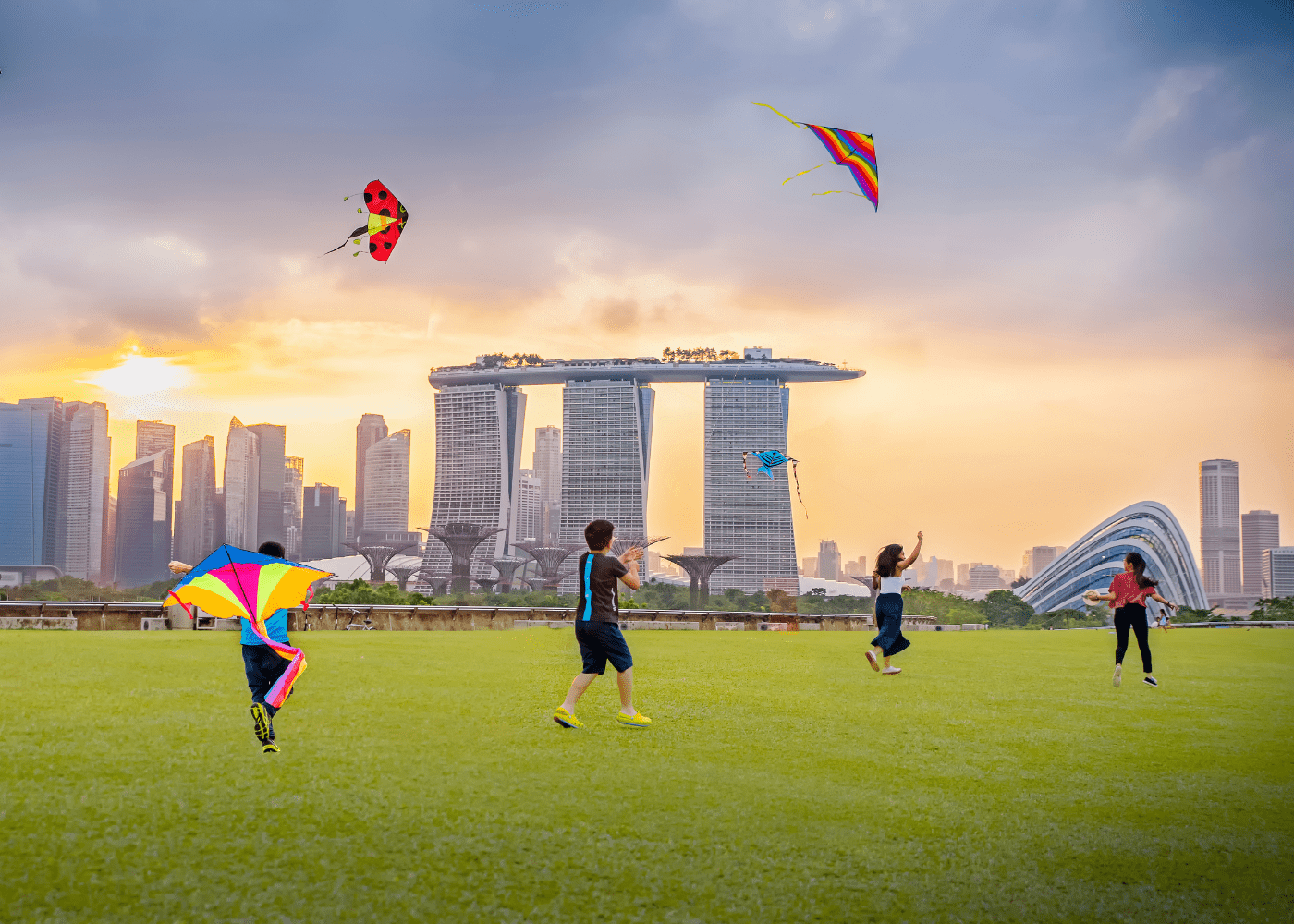 Fun + free things to do in Singapore

The Arts House is currently an arts events place that hosts amazing exhibitions and concerts. But from 1965 to 1999, it housed the Parliament of Singapore. If you think the facade is beautiful, the interior is just as remarkable. Though it went through a few renovations over the years, the Victorian-style building is well known for The Chamber. Concerts, film screenings and art exhibitions are often held within the space.
The Arts House, 1 Old Parliament Lane, Singapore 179429

Home to two national monuments – the former Supreme Court Building and City Hall, the National Gallery is a true marvel. After converting into an art gallery in 2005, this historical site of Singapore now oversees the largest public display of Singaporean and Southeast Asian art with over 8,000 artworks.
National Gallery Singapore, 1 St Andrew’s Road, Singapore 178957

Fondly known as The White House of Singapore, The Istana (which translates to palace in Malay) is the official residence and office of the president. It was formerly a nutmeg plantation before its renovation in 1867. What stands out is the 18th century neo-Palladian style, complete with wide verandahs, large louvred windows, panelled doors and dwarfed piers and arches. Want to visit? The Istana is open to the public on Chinese New Year, Deepavali, Hari Raya Puasa, Labour Day and National Day.
The Istana, 35 Orchard Road, Singapore 238823

This iconic heritage hotel is steeped in rich history. Old world charm meets luxury at the colonial-style icon and former beach house, which was opened as a hotel in 1887. There are many notable establishments including Long Bar, where the Singapore Sling cocktail originated. Raffles has also greeted some of the world’s biggest celebrities and personalities, including the Duke and Duchess of Cambridge.
Raffles Hotel Singapore, 1 Beach Road, Singapore 189673

Loaded with history, the Battlebox is located in the lush Fort Canning Park. It served as a bomb-proof bunker of Britain’s Headquarters Malaya Command in World War II and the spot where a lot of crucial decisions were made. It was inside the Battlebox that the British decided to surrender Singapore to the invading Japanese on 15 February 1942. Entry to the Battlebox will only be through guided tours so remember to book in advance! Post-tour, you can also visit a replica of Raffles’ house which is also in the park.
The Battlebox, 2 Cox Terrace, Singapore 179622

Known for being the oldest Chinese temple in Singapore – and the most important temple to the Hokkien clan here, this historical site of Singapore and place of worship is dedicated to Mazu, the Goddess of the Sea. With its remarkable architecture and history, the restored-to-perfection Thian Hock Keng Temple is one of Telok Ayer’s biggest gems. Detailed carvings and sculptures pepper the architectural masterpiece’s interiors, while gorgeous encaustic tiles make for interesting photos, but as with any place of worship, proceed with caution and respect.
Thian Hock Keng Temple, 158 Telok Ayer Street, Singapore 068613

Built in 1824 by the first sultan of Singapore, Sultan Hussein Shah, this magnificent mosque is the biggest in Singapore. The prayer hall can accommodate up to 5000 people in mass prayer. Besides taking in the grand architecture of the mosque, take time to walk around the Arab Quarters where the mosque is located. Allotted by Raffles to the sultan and made to be a Muslim settlement the zone attracted many traders. From Malays, Sumatrans and Javanese, as well as traders from what is now eastern Yemen. This led to the creation of one of Singapore’s popular historical places, Arab Street. A mix of old and new, check out heritage shops in the area.
Sultan Mosque, 3 Muscat Street, Singapore 198833

This centre of performing arts may awe you with its mix of modern and classic architecture. But when it was built over a century ago, the building was known as the Town Hall and Victoria Memorial Hall. It served different purposes throughout history. During World War II, as with many other historical buildings of Singapore, Victoria Theatre and Concert Hall was utilised as a hospital. These days, it’s picturesque as ever and home to the performing arts.
Victoria Theatre and Concert Hall, 9 Empress Place, Singapore 179556

More than just a gastrohub of restaurants and eateries, Chimjes’ history goes way back to the 50s. Formerly the complex for the Convent of the Holy Infant Jesus (CHIJ), the institute was a girls’ school run by French Catholic nuns. In 1990, the place was declared a national monument and has remained an icon in Singapore’s history and architecture.
Chijmes, 30 Victoria Street, Singapore 187996

In bustling Chinatown, you’ll find one of the most treasured historical places: the oldest Hindu temple in Singapore. The Sri Mariamman temple was constructed for the worship of Goddess Mariamman, believed to be the ‘goddess mother’ of South Indians and the bringer of rain and prosperity. Fun fact: the temple was originally supposed to be built on Telok Ayer Street but it was deemed unsuitable as freshwater required for rituals was unavailable nearby. It remains to be an iconic historical site of Singapore’s heritage. The ornate details in the architecture still prove to be fascinating for anyone.
Sri Mariamman Temple, 244 South Bridge Road, Singapore 058793

So what are you waiting for? Get your shoes on and check off our list of historical places in Singapore!

Travel back in time with Singapore's heritage food