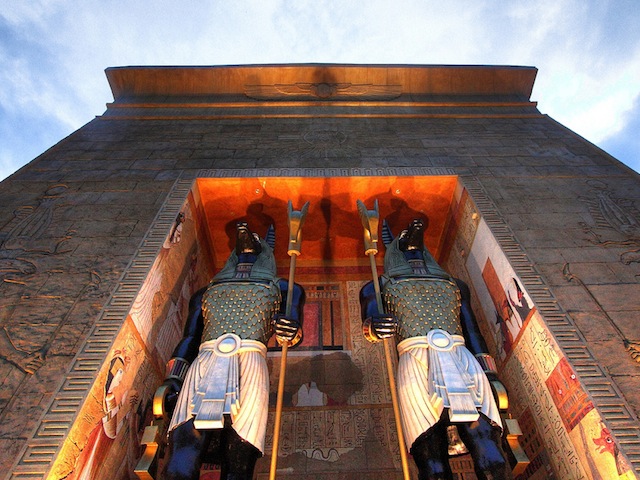 You're in for a magical time at Universal Studios Singapore; Credits: w3i_yu's Flickr

All you need (and want) to know about Singapore's first and only theme park, from the attractions and restaurants to performances

There is no doubt: South East Asia’s only Hollywood theme park, Universal Studios Singapore at Resorts World Sentosa, is one of the best tourist attractions in sunny Singapore; even locals are flocking there on weekends! But with only nine hours to cover the massive amusement centre, an itinerary is definitely in order. Here, we have broken down the movie wonderland to help you navigate its surrounds like a season ticket pro. It’s probably also wise to book one of these Sentosa hotels too – we are pretty sure getting out of Sentosa Island will be a total chore after a whole day of exhausting fun.

The total hours of fun
Universal Studios Singapore opens from 10am to 7pm. Yes – it was more than enough time to cover the theme park. No – we wished we could stay longer and sit the rides again and again.

The additional cost to skip the queue
Save time and cut the line with an express ticket. Paying $50 more means you are entitled to take the fast track for each participating attraction once. Not good enough? Top up a little more for the Universal Unlimited Express pass ($70) instead.

The amount needed to keep your belongings safe
For $10, you get a small locker to secure your bags and what-nots for the entire day. Sharing with a pal? Get a bigger locker at $20. Lockers can be found at Hollywood, Sci-Fi City, Ancient Egypt and The Lost World. Tip: Ancient Egypt lockers are free for the first 45 minutes.

The total number of rides and attractions
Excluding live performances, there’s a total of 21 rides and attractions within Universal Studios Singapore. Go behind the scenes at Steven Spielberg Lights! Camera! Action!; help Shrek save Princess Fiona in Shrek 4-D Adventure; or scale the walls of The Lost World and find treasures atop of the Amber Rock Climb.

The number of rides and attractions that are exclusively “Singaporean”
Even if you’ve step foot into every Universal Studios in the world, you will still get a different experience at USS. Nearly all the rides here are specially designed for Singapore.

High speed rides that are not for the faint of heart
The reopening of Battlestar Galatica will make this list seven. While some rides are milder for kids – like the newly opened Puss in Boots – they are no doubt, just as thrilling. We were holding on to our seats for Jurassic Park Rapid Adventure and junior roller coaster Enchanted Airways (it’s scarier than you think), but our favourites were hands down Revenge of the Mummy, Transformers The Ride and the unsuspecting Canopy Flyer.

The average waiting time (in minutes) during weekends
We prefer going on weekdays when queuing takes as fast as five minutes. Sadly, our nine to five jobs leave us only with the weekends. Thank god for express tickets!

The number of zones in the park
We like to believe it’s because of feng shui and superstition (Lucky no. 7!) that the rad theme park has seven zones – Hollywood Zone, Madagascar, Far Far Away, The Lost World, Ancient Egypt, Sci-fi City and New York. It did eased our weak hearts knowing (or believing…) that we won’t die from fright when riding any of their high-intensity roller coasters.

The various performances you should watch
Ask a guide for the showtimes and plan your schedule around various performances. Be sure to catch a wacky dance number by the Penguins of Madgascar and watch stunning Hollywood’s Dream Parade – they are definitely must-sees amongst these eight shows for a complete USS experience.

The height required for most rides
Most rides require a minimum height of 122cm to enter. Any shorter and an adult needs to be present. Do note that the minimum height for Revenge of the Mummy is 122cm, with or without adult supervision.

Places to eat within the theme park
Screaming and running around from ride to show to ride takes up a lot of energy. Fuel yourself and dine at the 14 various dining spots scattered across the various zones. Visit all-American diner, Mel’s Drive, for a burger and milkshake fix. Have local hawker fare at Discovery Food Court. Muslim friends can get their meals from these four MUIS-certified restaurants: Oasis Spice Café, Goldilocks, Friar’s and Marty’s Casa Del Wild. Those in big groups, head to Loui’s NY Pizza Parlor and order their 20-inch pizza.

The number of shopping opportunities
Unlike tacky merchandises commonly found at tourist attractions, USS actually has really cool souvenirs. In fact, we bought ourselves an awesome transformers mug; an Oscar awards trophy (because we’re stars) and the adorable Despicable Me “It’s so fluffy!” stuffed unicorn the last we went.

The number of costumed characters and street stars
An amusement park wouldn’t be an amusement park without mascots and character lookalikes. Find Optimus Prime, Woody Woodpecker, Beetlejuice, Betty Boop, Charlie Chaplin, Elmo, and Shrek – just to name a few – as they roam the streets!

The days it took to build the Universal Studios Globe
That massive globe at the entrance measures 7.32m in diameter and weighs 4.5 tons. It’s also the only Universal Studios globe in the world to have Singapore marked on the map.

The seating capacity at Waterworld’s amphitheatre
One of the world’s largest theme park amphitheatres, we guess Waterworld deserves it’s ranking for being Universal Studios #1 rated stunt show – the amphitheatre is constantly full house!

The year Universal Studios was founded
This nifty guide is our little way of saying Happy Birthday to the film company (founded on 30 April) that has brought hope and happiness to the world.