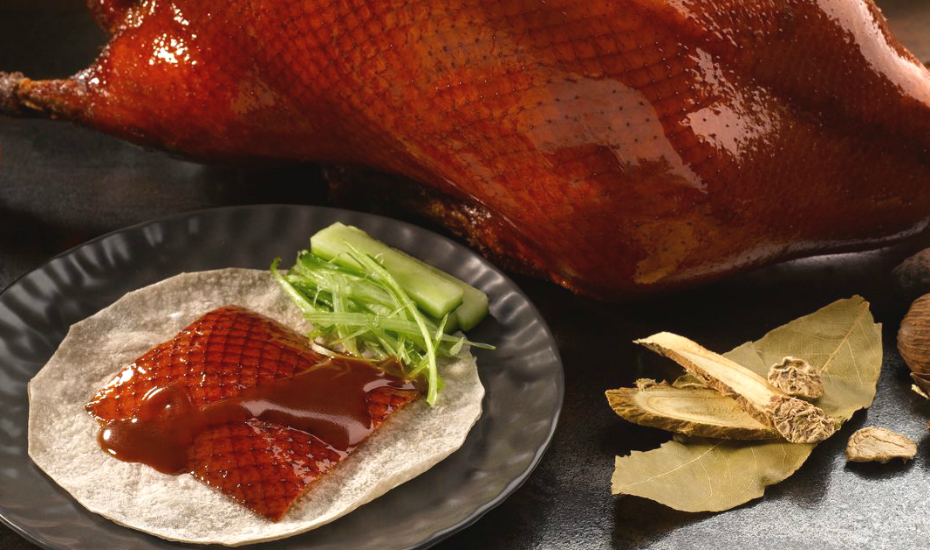 Get your (Peking) duck on at these top restaurants for Chinese New Year, without hopping on a flight to Beijing

Who doesn’t love Peking duck? Think thin slices of succulent duck meat with crispy skin, wrapped in rice flour crepes with sliced cucumber, spring onion, and a slather of sweet hoisin sauce. It’s a crunch on first bite, followed by a lingering tenderness and flavour which deservingly earns the dish its title as national delicacy of China. To dig into this decadent dish without hopping on a plane to Beijing, here are some top Chinese restaurants in Singapore to get your duck on.

Officially the oldest Chinese restaurant in Singapore, Spring Court is a household name amongst connoisseurs of Chinese cuisine. Founded by Ho Loke Yee back in 1929, this Chinese restaurant has hopped across different locations (including Chinatown and East Coast) before settling in its current mammoth-sized space at Upper Cross Street that takes up four shophouses and seats 650 diners. The Peking duck here is one of the establishment’s classics – a recipe tried and tested across three generations.
Spring Court, 52-56 Upper Cross Street, Singapore 058348, p. 64495030

A match made in heaven between Singapore’s Tung Lok Group and Beijing’s famed XiHe Group, this snazzy expat-friendly restaurant boasts chic, contemporary interior, and an open kitchen concept where you can watch chefs skilfully roast the duck in a fire brick oven. Based on XiHe restaurant’s original Peking duck recipe, you can expect an authentic rendition of the roasted delicacy, but served with unusual condiments, like blueberry sauce and lemon pop-rocks, for a modern twist.
Tung Lok XiHe Peking Duck, #07-07/09 Orchard Central, 181 Orchard Road, Singapore 238896, p. 6736 0006; Open daily 11.30am-3pm & 6pm-10.30pm.

Boasting an authentic menu and a prime rooftop location that attracts both locals and visitors, Yan at the National Gallery Singapore is the perfect spot for Cantonese fine dining in Singapore. Check out our full review where we sampled truffle and prawn dumplings, golden pumpkin broth with scallops, and its signature Peking duck served with homemade crepes and traditional garnishes.
Yan, #05-02 National Gallery Singapore, 1 St. Andrews Road, Singapore 178957, p. 6384 5585 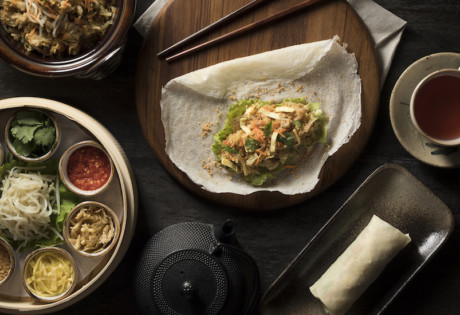 Where to go when you're craving Chinese

With three outlets around the island, PARKROYAL on Beach Road, PARKROYAL on Kitchener Road, and UOB Plaza 1, Si Chuan Dou Hua gets two thumbs up for spreading the Peking lurveee. Our votes are on the UOB Plaza 1 branch, which offers up a superb panorama of the Singapore cityscape along with its crispy, succulent duck. Their homemade thick sweet sauce is a real standout, and perfectly complements the wrapped duck with spring onions and cucumber.
Si Chuan Dou Hua, #60-01 UOB Plaza 1, 80 Raffles Place, Singapore 048624, p. 6535 6006; Open daily 11.30am-2.30pm, 2.30pm – 6.00pm & 6.30pm – 10.30pm.

Enhancing the already vibrant dining scene of Clarke Quay is VLV Restaurant – a classy establishment that boasts over 60 Chinese delicacies with a focus on modern Cantonese flavours. Case in point? The VLV Peking duck is a rendition that elevates the Beijing culinary tradition; aside from offering the sweet and savoury goma hoisin sauce, you can also opt for the rich truffle foie gras sauce if you’re feeling fancier.
VLV Restaurant, 3A Merchant’s Court, River Valley Road, #01-02, Singapore 179020, p. 6661 0197; Open daily 12pm-3pm, 6pm-11pm.

Helmed by Masterchef Lap Fai, AKA World Gourmet Series Award of Excellence 2014’s Chef of the Year, Hua Ting Restaurant honours its roots in Cantonese cuisine and takes fine dining for oriental palates to great new heights. Besides serving up a veritable spread of traditional dim sum, Hua Ting Restaurant dishes out a mean version of the classic Peking duck, at $80 for a whole duck. Their friendly staff will seek your choice of how you’ll like your meat served, and you can even request for any leftover duck meat to be cooked with other dishes which have yet to be prepared.
Hua Ting Restaurant, Orchard Hotel Singapore, 442 Orchard Road, Singapore 238879, p. 6734 7766; Open Mon-Fri 11.30am-2.30pm & 6.30pm-10.30pm; Sat-Sun & PH 11am-2.30pm & 6.30pm-10.30pm.

Get Thai food in the comfort of home