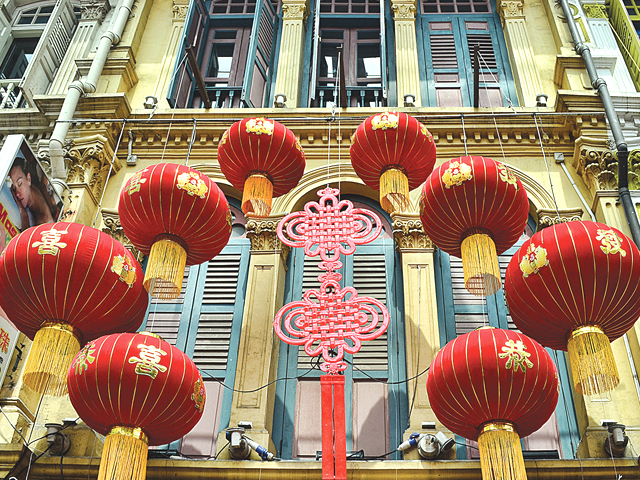 The festivities for Chinese New Year seem to get bigger and bolder as the years go by. However, the ideas and beliefs behind its traditions remain unchanged.

One of the most elaborate rituals is the lion dance – an energetic performance by acrobatic dance troupes. Chances are you’ll see a couple of acts on the streets around the Chinese New Year period, which takes place in the month of February. Don’t be taken aback by all the noise, it’s meant to ward off bad luck for the Lunar New Year.

More traditions are observed at home, like spring-cleaning the house before the holidays, exchanging oranges, and giving out ang bao (red packets with money). The oranges signify prosperity, while the money-filled red packets represent good luck, and are believed to ward off evil spirits. The latter is typically given out by married couples to single people, particularly children.

Another popular practice in Singapore is the yusheng toss, which is carried out at home or when dining out at restaurants as part of the traditional Reunion Dinner. Yusheng is a raw fish salad that comes with an array of ingredients including shredded vegetables, crushed peanuts, fried flour crisps, Photo credit: flickr.com – Choo Yut Shing pomelo, and more. The idea is to get everyone around the table to toss the ingredients up in the air using chopsticks, all while reciting phrases of well wishes of luck and success. The higher you toss, the better. But be warned: it’s a messy affair!

More deliciousness ensues with iconic Chinese New Year goodies like bak kwa (barbecued meat) and pineapple tarts; items you’ll constantly see on offer during this festive period. Both edibles symbolise good things like wealth and prosperity, so give these seasonal specials a try when you’re in the Lion City!

This article was published in the first edition of Honeycombers’ Singapore Insider (Jan-Mar) print guide. Want more? Download the full guide in PDF format, or visit Your Singapore.