Up your snap game at these photogenic street markets in Hong Kong (and you may end up shopping till your drop too!)

Evident from Buddhist temples frozen in time to the historic buildings showcasing the colonial era, and the abandoned Hakka villages, it’s not easy to lose touch with Hong Kong’s history and culture. Along this note, another strikingly unique feature of Hong Kong has got to be the street markets – local vendors selling all things ranging from quirky souvenirs, clothing, to dried seafood. Here we present: the most photogenic street markets in Hong Kong.

During the Ming and Qing Dynasties, this very street belonged to a village in Mong Kok and it was used to grow flowers, hence the name Fa Yuen Street which translates to Garden Street. Located between Boundary Street and Dundas Street in Mong Kok, the best view of this market has to be from the overhead footbridge that links to MOKO in Mong Kok East. There are about 50 stalls predominantly selling clothing for men, women, and children. The market also holds the name Sneaker Street given the great bargain for sportswear and sports gear. You can find out more about where we like to shop sneakers in Hong Kong here.

a. Get off MTR Exit B2 in Mong Kok.
b. Go up the escalator that connects to the footbridge.
c. Walk along the signs posting to Mong Kok East (on your way you should see the eye-catching street market).

During the Qing Dynasty, a row of five adjacent Tin Hau temples were built in Yau Ma Tei along the neighbourhood of this busy flea market, hence the name: “Temple Street”. Temple Street market is home to not only numerous vendors’ stalls but also to some lip-smacking restaurants (read our full guide on dining in Yau Ma Tei restaurants for more). The road-side dining offers snacks, traditional Chinese cuisine such as hot-pots, and also freshly cooked seafood. This happening street has been featured in locally produced films and TV series, often depicted as a street of crime drama.

Temple Street runs in areas of Jordan and Yau Ma Tei.
a. Gett off MTR Exit A at Jordan.
b. Turn right and walk straight for about 10 minutes.
c. Main entrance to Temple Street Market will be at your left.

Of course, Sham Shui Po had to be included in this list of photogenic street markets in Hong Kong! This street is also known as Toy Street for having line after line of toy stores and stationery stores. Entertaining to children and adults alike, this is where you can find toy KMB buses, taxis, minibusses, and trams; very nostalgic to adults who grew up playing with these! If you’re around SSP, take a look at these great restaurants, cafes, and craft stores too. 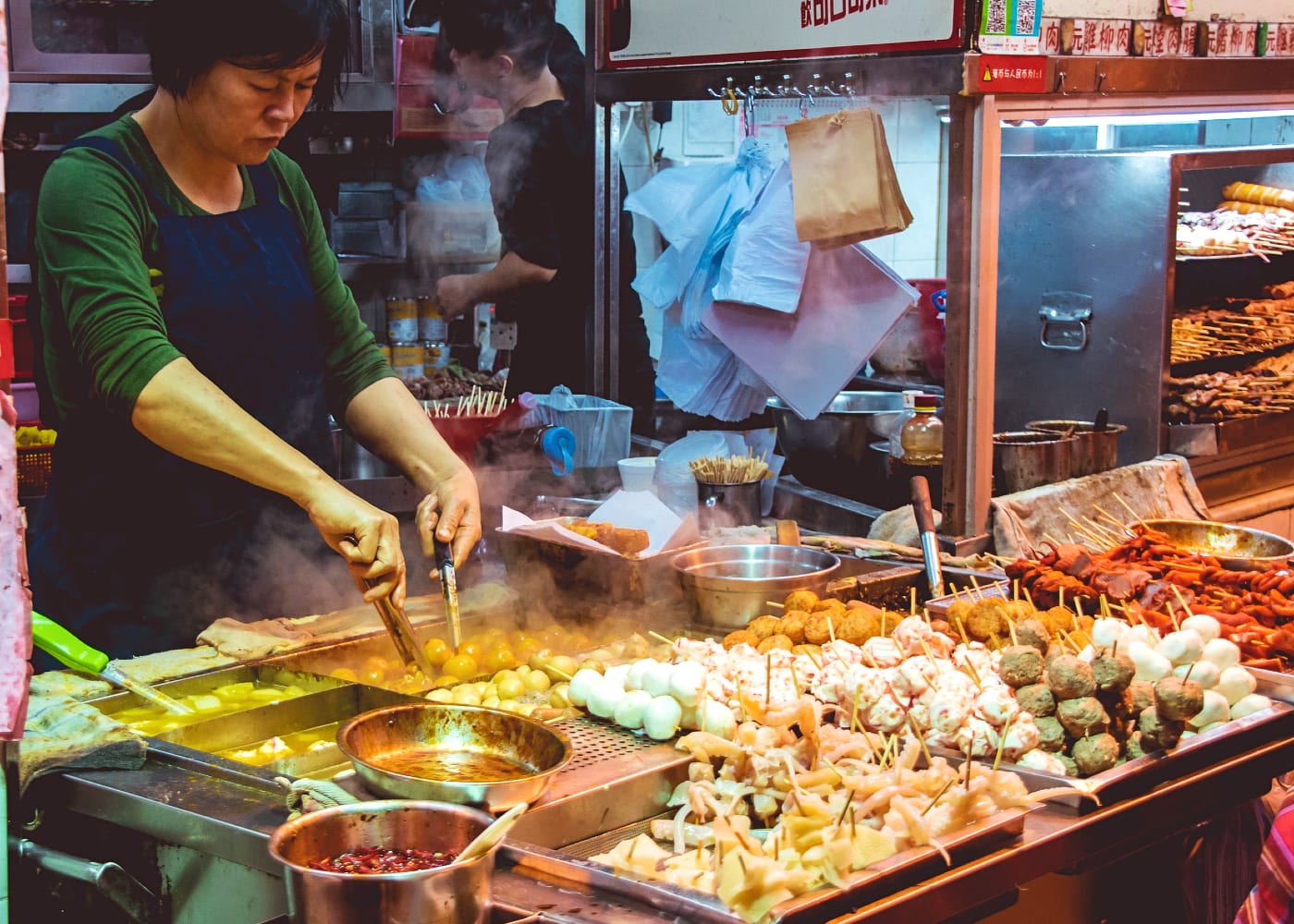 Though the street is called Upper Lascar Row, it’s more commonly referred to as Cat Street amongst locals. Why this peculiar name? Well, back in the 1920s, a lot of stolen goods were believed to be sold here; in Cantonese, “rat” refers to stolen goods and its consumers are referred to as “cats”. Don’t worry, this doesn’t happen in Hong Kong anymore! What you can find at Cat Street nowadays are shops selling jade, Terracotta warrior statues, Mao statues, and some crystals and precious stone bracelets. We love heading to this area to pick up trinkets for our homes and for gifts, and it’s no surprise it’s included in our full neighbourhood guide to Sheung Wan.

This iconic street market has our beloved trams going through it – much like the Maeklong Railway Market in Bangkok where a train runs through every now and then! North Point is an area in the Eastern District that is lined with old buildings, some of which have been replaced as new residential areas. What remains unaltered is how good North Point looks in pictures.! It’s almost as if you’re capturing a postcard-worthy image to send to friends living in other parts of the world! Market go-ers can buy clothing, bags, fruits, vegetables, and meat (quite a range, yes). And if you’re planning on taking the Ding Ding, our DIY Tram Tour will help you get there.

a. Get off either MTR Exit B1 in North Point.
b. Cross the road to get to the opposite side of King’s Road.
c. Walk straight to your left.
d. Go into Tong Shui Road.
e. Turn left to get to Chun Yeung Street.

Have you discovered all this HK street art?

Stop and shop at these top Central boutiques