It's gadgets, computers, and tech toys galore at the PC Show 2017 at Marina Bay Sands Expo and Convention Centre from 1 to 4 June

If your laptop’s starting to slow down and your headphones are falling apart, you’re in luck – Singapore’s longest-running tech fair is just a week away. The annual event, held at Marina Bay Sands Expo and Convention Centre, will offer guests stellar deals on the latest tech gadgets from respected brands such as Acer, Asus, Canon, Fujifilm, Samsung, Lenovo, HP, Dell and many more.

Just some gadgets on sale include the Xbox One ($249), a Minimotors electric scooter ($540), and a FujiFilm XA3 ($999). But we’re just scratching the surface here, so pay a visit for yourself and indulge in all your techy desires.

If you’re in a mood for a spot of treasure hunting, take part in the Amazing Tech Hunt. Visitors can simply pick up a copy of the yellow game card and answer a set of riddles associated with gadgets and deals at the show. Drop off your completed cards in the lucky draw box to stand a chance to win a one-night stay at the Marina Bay Sands Hotel. 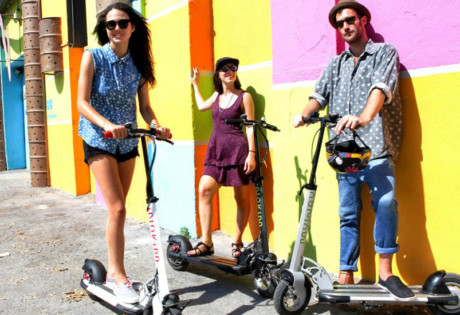 Zip around the world of electric scooters

For more tech toys and gadgets, check out our ultimate guide to drones in Singapore and where to get electronics in Singapore.