Read on for some red packet rules... Photography: courtesy of Mr. Witoon Boonchoo via Shutterstock

Wondering how much to give? And who should you give ang paos to? Or just trying to avoid any basic ang pao mistakes during Chinese New Year? Here's how to navigate the red packet exchange...

Ah, ang paos (red packets). If you’re on the receiving end, this is definitely something you will look forward to every Chinese New Year (in addition to all that snacking on CNY treats and shopping for that killer cheongsam). If you’re part of the giving gang, however, you might find yourself fretting over everything from how much to give, to who should you give them to. After all, nobody wants to commit a faux pas at the start of CNY – superstition has it that cheery vibes during the festive season will likely give you good fortune throughout the year! So whether you’re a Chinese New Year newbie or a seasoned Singaporean wading into the red packet exchange from a whole new perspective, here’s a quick ang pao 101…

Frankly, it’s really up to you. Ultimately, ang pao giving is a sign of goodwill, and there really isn’t a strict rate to be followed (unlike ang pao giving for weddings – and that’s a whole different story). It usually depends on how close you are, and we’ve heard of people getting ang paos ranging from anything between $2 and $100 (that’s not to say you can’t give beyond that range). However, you should always remember that ang pao giving is a kind gesture and you really don’t need to strain your finances just to meet some target.

What’s the story with fours and eights?

Any figure with the number four is a no-no, as it’s traditionally associated with death and misfortune. Eight is perceived as a lucky number (it sounds like the Chinese way of saying “fa”, which symbolises earning wealth), so many people like to gift ang paos with a denomination of eight, e.g. $8, $18. Also, try to give ang paos in even numbers as the Chinese believe it to be auspicious – there’s a traditional saying which goes “good things come in pairs”.

Is it a deal-breaker if you don’t get fresh notes?

Well, it would be nice if you could pop by the bank or certain ATMs and get some new notes – banks are usually prepared to issue them every Chinese New Year but go early to beat the queues. In Chinese tradition, new things are always preferred, which is why you can see everyone dressing up in new clothes and giving their spring-cleaned homes nice new makeovers during the CNY season. Out with the old and in with the new! This Chinese saying still rings true for many people. 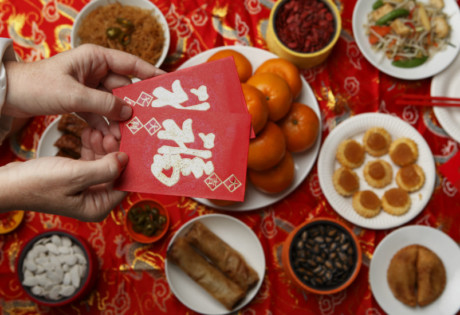 So is CNY just one huge ang pao swap?

Nah-uh. Chinese New Year is also about getting together with the fam-bam and loved ones but it always feels good to give and receive a red packet. Traditionally, only married people give ang paos. Some follow the practice of newly married couples not needing to give ang paos in their first year of marriage, but it depends on each family.

What about the friendly security guard downstairs, or the cleaning auntie?

Ang pao giving is a form of goodwill, but you don’t have to go OTT. It’s usually given to singles and children, but there’s no stopping you from giving ang paos to anyone you like, e.g. single and older family members. Spread the love!

Give or receive red packets with both hands, and take note that it’s generally considered rude to open the ang pao when you get it, since it’s really more about the gesture than the actual amount inside. Don’t forget your well wishes too! A simple “Xin Nian Kuai Le (Happy New Year)” or “Gong Xi Fa Cai” (Wishing you an abundance of fortune) will work, but if you’re looking to impress, there’s a whole lot of other four-word well wishes that you can use. Psst. They’ll come in handy during the yu sheng sessions too.

Battle of the bak kwa: Where to buy the best

All the pineapple tarts. Seriously.