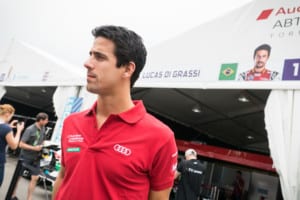 Hong Kong embraces sustainability more and more every year. These days, it’s easy enough to shop environmentally-friendly fashion at places like Womb, The Slow Mode and Ril Creed, decorate a home with sustainable products and eat at vegetarian restaurants with responsibly-sourced ingredients. While Hong Kong on the whole is very good at using public transport – which helps decrease overall carbon emissions – there are still areas that need improvement. We chatted with Formula E Audi driver Lucas di Grassi while he was in town for a past race about the future of electric cars and the changes we can expect to see in cities thanks to the technology that he is helping to develop.

An interview with Lucas di Grassi

Hi, Lucas. Welcome to Hong Kong! How does it feel to be back?

It’s amazing to be back. I’ve been here 10-15 times already, and it’s always very good to come back. I love this place! I just wish I could spend more time here. I did manage to go to a really cool small beach here once which was really nice, but there’s not usually enough time.

Tell us about Formula E, and in particular the competition here in Hong Kong?

The competition in general is spicing up. There are a lot of manufacturers joining, and everybody understands that electric is the future so everyone is trying to come in and show and improve their technology. So, it’s really building momentum.

What about the track in Hong Kong, as opposed to elsewhere?

The track in Hong Kong is short, but it’s tactical. There are a lot of overtaking points; a lot of different corners; different tarmacs – you have concrete on one side, asphalt on another – so it’s kind of tricky to set up the car properly. It’s a very challenging track to drive.

Is it fun though?

#FANBOOST is on! Let’s fight another year. You can be part of it actually giving extra power by voting on www.fiaformulae.com/fanboost ⚡️⚡️⚡️🏆| FIA Formula E Hong Kong ePrix Sat & Sun December 2nd/3rd. 🙏🏻 also thanks to my partners @schaefflergroup @qualcomm #CBMM -> #Niobium & @AudiBR You’ve driven on polar ice caps, Formula 1, and you must drive to get from a to b sometimes too. What made you switch to electric?

When I changed to electric, it was before everybody else. I was like the first driver to join; one of the first employees of Formula E, and for me it was very clear that electric was the future. When you look at how an electric motor works, how mobility works with electric propulsion, it makes much more sense technically and economically, and it will only improve.

It was natural that the industry would go to electric, and if the industry needs to go somewhere new, motor sport has to follow. So for me it made sense that electric would step up in motor sport, and there was no series, so we kind of created Formula E from scratch.

What do you drive on a day to day basis?

I’m an Audi driver, so I have five different Audi cars, but my day to day car is a Q7 hybrid. I can run pretty much electric the whole week, and I only switch to combustion if I need to do a long trip. I’m waiting for Audi to release the Sportback electric, which is going to come next year.

You’re also working on the creation of driverless cars. Tell me more about that, in terms of the future for automated vehicles.

The first step is to turn everything electric, but at the same time that society adapts to electric, the cars will become automated, not only driver-assisted, but also automated, which will improve road safety and reduce the cost of transportation.

I think we’re really going to see a big revolution in cities: cars connected to the roads, cars being charged by the roads wirelessly, batteries evolving, share ownership. Imagine if Uber was fully automated and you just have a driverless vehicle and you pay as you go?

As soon as you automate and electrify everything, it really just revolutionises so much, including the transport of goods, the transport of people, where people live, how much traffic there is. It’s really a big game changer, and that’s why I’m betting that’s the next step. And if the industry is going to go autonomous, then also you need an autonomous series to showcase the technology, and that’s why we have the Roborace, which is a series that I am trying to lead at the moment.

But what about your job!?

Well… In the 20th century they created something called the car! And there are still horses around. If you want to ride a horse, you still can. In a few decades, it will be the same; you will only drive if you want to drive. I bet that you don’t like to drive in traffic, nobody likes to drive in traffic, I mean, I hate it too. So this will really change cities. But if you still want to drive on a race track and have fun, you will always be able to do that too.

The FIA Formula E Championship is the world’s first fully-electric international single-seater street racing series and Lucas di Grassi was the first ever winner of the event. More than that, it acts as a platform for international manufacturers to test road-ready technologies. Taking place in 11 cities across five continents, in 2020, Hong Kong will not be host to a race, but the Sanya E-prix will be a nail-biter.

It's all about falafel & hummus: Falafel TLV