Up until only a couple of years ago, the strip of beach currently occupied by the Double Six Resort played home to 66, one of Southeast Asia’s most notorious all night clubs. So famous they named the beach after it, it was known for a deathtrap bungee jump over the club pool and enough stories of late night debauchery to fuel a second summer of love. Fast forward a handful of years and the beach has transformed from rave central into a truly chic suburb of Seminyak with the Double Six Resort being the crowning glory of its rapid facelift. Only a few doors down from mega Bali club Cocoon, the all-suite hotel is absolutely beautiful. Designed by myriad talents including artist Stephen Ormandy, fashion designer Chossy Latu and Australian restaurateur Robert Marchetti, whose Italian concept at the hotel is world class. The focus is on style and quality, from the baroque lobby pillars to the teakwood interior of the foyer through to the contemporary funky interiors of the suites themselves and the stunning open kitchen feel of Marchetti’s flagship restaurant. The suites are massive in scale and utilise the dramatic ocean view to incredible effect. It’s hard to tear yourself away from your balcony come sunset but struggle to manage it and you’re all of ten metres from the beach and any number of funky cafes and bars that line the road just by the high tide mark. Without a doubt the best spot to catch the sun fading is the Double Six Rooftop, the surface area of the entire hotel, 15 metres above sea level. With sweeping panoramic ocean views, at 1700 square metres it’s one of the world’s largest rooftop bars serving tiki-inspired cocktails, BBQ pit cuisine, nightly cabarets and a silent cinema (points for total originality there). Marchetti’s Seminyak Italian kitchen is also gloriously well appointed for sundowner cocktails, and we challenge you not to hang around into the evening and order from his incredibly authentic and quality Italian menu. The salamis are to die for, breads amongst the best on the island and the pasta is world class as is the wine cellar with one of the largest collections of labels on the island. There’s another two F&B concepts in the works due to be unveiled later this year. 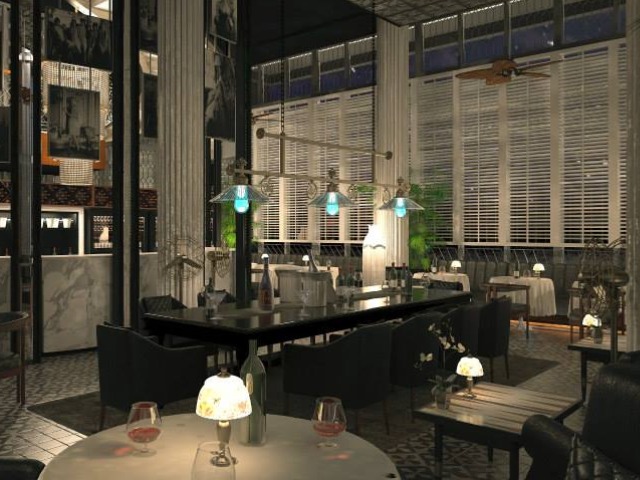 The Plantation Grill will be a throwback to the glamour of the prohibition era and twenties-style luxury, with marble finishes, a vaulted double-height ceiling and huge glass windows looking out to the sea. It will specialise in dry aged meat and line-caught seafood cooked over custom made open grills and wood-fired ovens. Bali has long been in need of a quality steak and seafood restaurant (though FIRE at W does deserve a nod in this category), so it will be exciting to see what Marchetti and his team concoct on the rooftops of Double Six come year end. Staying within the spirit of the glamorous Great Gatsby era and focusing on quality drinks, Sling Bar is set to deliver a sophisticated late night den with Indonesian influences, serving martinis, dark spirits and classic bar food into the wee small hours. Acqua Perla, the exclusive spa at Double Six is the perfect antidote to a day out in the sun and surf, this subterranean den of holistic goodness promises to have you refreshed and ready to head out into the night or detox you into a state of bliss within the hour. The subtle décor and focus on water and water related treatments make this a spa destination in its own right.

We reckon this could become the ‘go to’ Bali resort of choice for the 2015 crowd, but in the meantime jump on a last minute offer and make the most of a brand new resort before the rest of the world catches up.