Got football fever? Here's where to watch the World Cup in Singapore.

Surround yourself with fellow football fans and head out to watch the World Cup in Singapore.

It’s World Cup season (20 Nov to 18 Dec)! You and your best mates may be planning a gathering with pints of ice-cold beer and snacks for a potentially exhilarating match. Football fan or not, it’s a great excuse to host a little party and stay up till the wee hours. You’re probably thinking of gathering at a sports bar or piling up on someone’s couch to watch from home. Need some ideas? You’ve come to the right place. Here’s where you can watch the World Cup in Singapore, whether you want to keep it on a budget or class up the affair.

Where to watch the Fifa World Cup 2022 in Singapore

Make it a star-studded affair 57 storeys high at this rooftop bar. Catch the finals of the World Cup on Ce La Vi’s 65-inch television while sipping on premium pours and munching on bar snacks. The dress code is relaxed for the night, so feel free to show up in shorts. Plus, anyone wearing their favourite team jersey will be given complimentary entry! So show your fave team some love and score this perk. There’ll also be beats spun by resident DJs to keep you going through the night.
Ce La Vi, Level 57, Tower 3, Marina Bay Sands, 1 Bayfront Avenue, Singapore 018971

Catch the World Cup in style at Lantern where you’ll be surrounded by panoramic views of Marina Bay. It’s almost beautiful enough to distract you from the match! Before game time rolls around, sink your teeth into the menu specials. This includes shakshuka, black angus beef tacos, or chilled sea prawns in a crispy golden cup along with bottles of Kirin or Heineken draught beer.
Lantern, The Fullerton Bay Hotel Singapore, 80 Collyer Quay, Singapore 049326

Want to keep it budget-friendly? Head to Changi Airport! This competitive season, the airport will be showcasing all Fifa World Cup matches on its big screen – from the qualifiers all the way to the finals. Just make sure to get there early because you’re not the only one thinking about cosying up on the steps. Before you settle in, be sure to grab some snacks!
Changi Airport, St3ps, Basement 2, Terminal 3, 65 Airport Boulevard, Singapore 819663

If you’re still looking for a place to hang with friends, look no further. This bar-bistro concept is the perfect spot to entertain a group. Order bar bites like fries, jalapeno croquettes, or nachos to share as you watch the World Cup matches. The Boat Quay location boasts three huge television screens and a Bose surround sound system, so you won’t miss a thing during the game.
Dallas Restaurant & Bar, 31 Boat Quay, Singapore 049820

Ah, Boat Quay. There’s a never-ending parade of bars that you can go to for a boozy fix. But none hit quite the same as BQ Bar. Regulars rave about this place till no end. The space is unpretentious, so you can let your hair down and forget about any office woes. Just be sure to book your table in advance because we hear seats fill up fast here!
BQ Bar, 39 Boat Quay, Singapore 049828

Located in the heart of Singapore’s CBD, your ticket to the upcoming Fifa World Cup 2022 is just a stone’s throw away. You’ll be situated right next to the Singapore River, where you’ll chill out with a selection of beer with complimentary popcorn. And you won’t be disappointed by the food either. When you manage to take your eyes off the screen for a second, nosh on pulled beef sliders, crispy gochujang chicken and seafood croquettes.
Town Restaurant, The Fullerton Hotel Singapore, 1 Fullerton Square, Singapore 049178 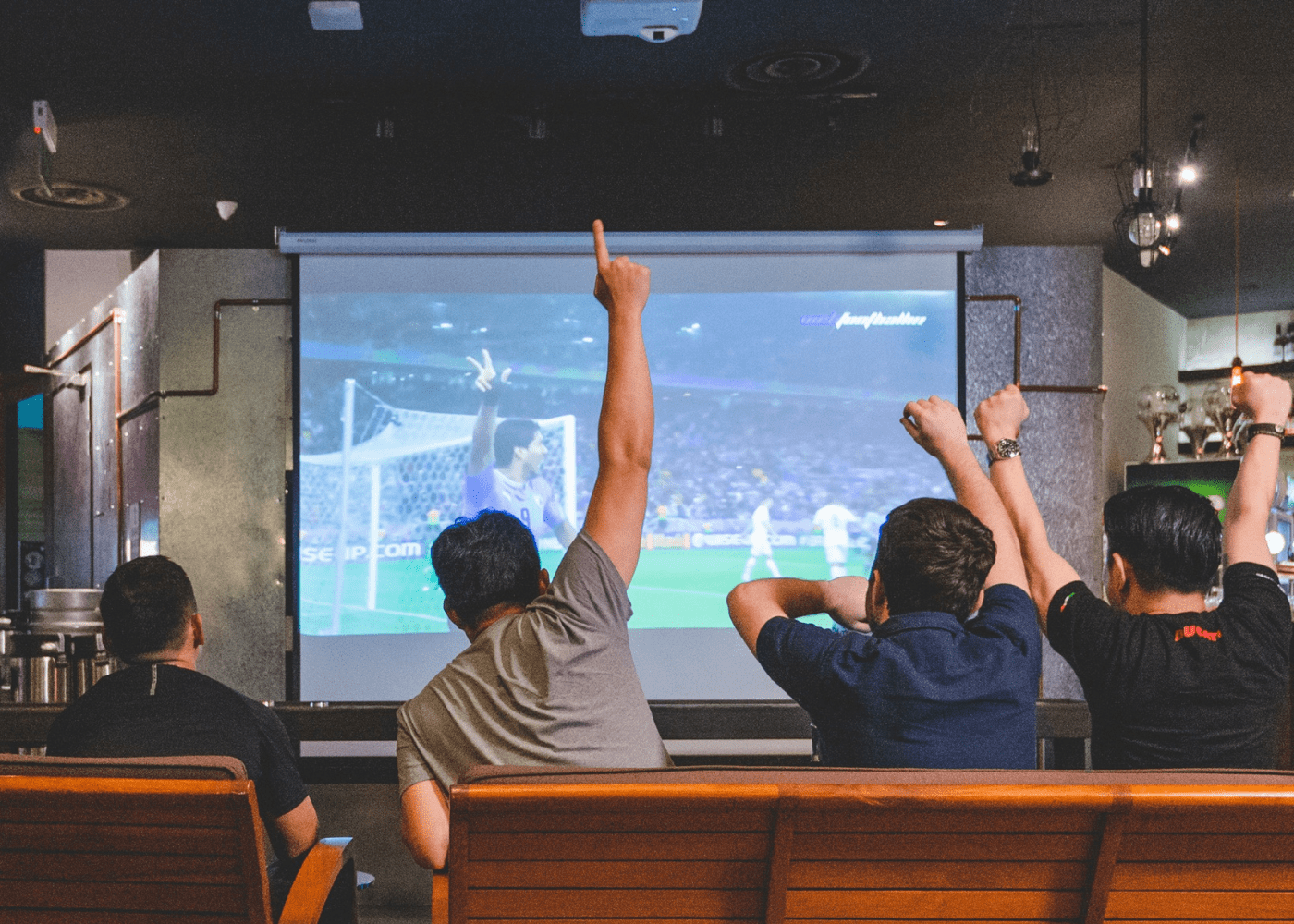 The best place to get your food and football fix? The Drunken Poet. This Irish bar dishes out some of the best fish and chips in the city. Generous portions, perfectly battered, fried to absolute perfection and salted to taste. What’s not to love? Don’t forget about the malt vinegar! Take a swig of a Guinness pint and you’ll be stuffed, happy, and all ready for the match.
The Drunken Poet, #01-29C, 400 Orchard Road, Singapore 238875

What better place to catch the World Cup action than at a dedicated football cafe? With basically every soccer match imaginable streamed on its screens, you bet Cafe Football isn’t missing out on the World Cup action. You’ll get into a competitive mood from the moment you step into the space. Not to mention the fun-themed menu items that’ll be a big hit with seasoned football fans.
Cafe Football, multiple locations including The Arena and Genting Hotel Jurong

If you’re looking to keep the watch party fuss-free and close to home, we’ve got just the thing. Hop on down to any of the local community centres for a free live screening of matches. There are 58 to choose from! On top of the livestreams, you can participate in a slew of fringe activities. This includes e-sports console games, mini soccer challenges, live performances, and prize giveaways. Just check out the website for a full list of community centres and screening schedules.
Local community centres, multiple locations around Singapore

An immersive 360-degree screening of the match? Sounds unbelievable, but we’re here to tell you that it is. An all-around view means that no matter where you sit, you’re going to get a great view of the action. There are even bar bites and beverages at your convenience throughout the event, as well as live entertainment from popular bands and DJs, including local band The Facade and DJ Tinc. We also heard that there are lucky draw prizes to be won, including business-class flights and luxury stays up for grabs.
Resorts World Sentosa, Resorts World Ballroom, 8 Sentosa Gateway, Singapore 098269

Football fever is back in full swing at Harry’s! How do we know? Because all 19 Harry’s outlets are going to be screening the world’s biggest football event. We’ve found out that some outlets are even extending operating hours. That means you can watch your midnight games in peace. Just make sure you get your reservation locked in so that you can get a good seat!
Harry’s, multiple locations including Clarke Quay, Holland Village, and Tai Seng

Muddy Murphy’s is a proud sponsor and the homebar of Hibernians Football Club, Singapore Gaelic Lions, and Hilderinc Football Club. You know what this means? That it’ll be screening the World Cup, of course. It’s got seven international beers on tap, perfect to quench your thirst from all the cheering you’ll be doing. And with six screens mounted high around the bar, you’ll be able to catch all the exciting sporting action no matter where you’re sitting.
Muddy Murphy’s, #01-02/03/04/05, Claymore Connect, 442 Orchard Road, Singapore 238879

For anyone that lurks around the CBD, make this your stop for all the football excitement. Lau Pa Sat will be hosting a Football Fiesta event within its space. Pull up a chair and make yourselves comfortable because all the matches will be screened live on a 130-inch LED screen. Pile your table up with good beer and hawker grub, and that’s your World Cup watch party set. Psst: we’d recommend sending someone to get seats early before the dinner crowd rushes in.
Lau Pa Sat, 18 Raffles Quay, Singapore 048582

Get your football jerseys on, because now you know where to watch the World Cup 2022 in Singapore! No cable no problem: Where to stream live sports events

Game on: Where to play sports in Singapore