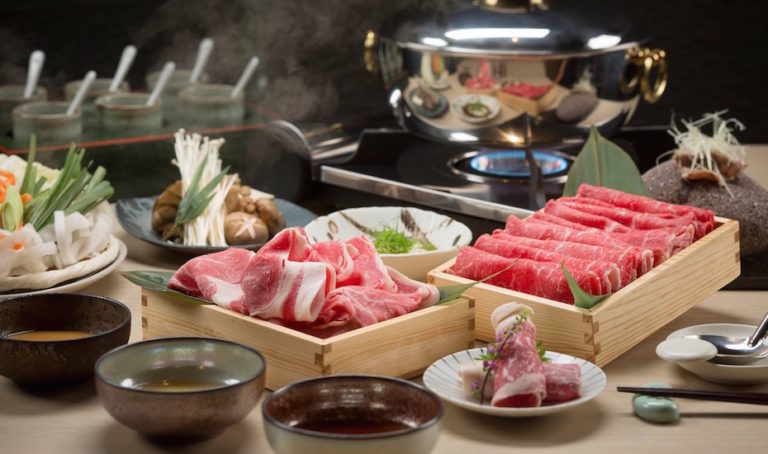 Looking for Japanese steamboat that isn’t sukiyaki? A shabu shabu lunch or dinner is perfect for sharing with friends and family

What do we love about Japanese hot pot? It’s a fun communal dining experience, you get SO MUCH variety in your meat and vegetable offerings (think everything from wagyu beef and kurobuta pork to sweet cabbage and shiitake mushrooms), and it’s a rather healthy, nutritious dish that doesn’t pack in calories. So if you’re craving a hearty shabu shabu feast, we recommend none other than these ten best shabu shabu restos in Singapore.

Wine Culture’s latest dining venture takes on authentic Japanese shabu shabu dining with a touch of European flair (pictured above). The twist being that – unlike just cooking in boiling water – the broths served here are European-influenced, like beef consomme and bouillabaisse. Sakurazaka also offers less common pork and beef varieties, and also a mix of Asian and Western vegetables. Sakurazaka’s Chef Masashi, a Fukuoka native, has also introduced traditional sukiyaki, as well as a selection of European-inspired kakigori (shaved ice) – we’re especially fond of the port wine-flavoured one! Click here for a full review.

Japan’s shabu-shabu specialist that has a whopping 196 outlets in its hometown alone, offers a delightful, all-you-can-eat selection of quality, thinly sliced meats and box-fresh vegetables from $33.90 onwards. How’s that for value?

“Good quality with reasonable price” – that’s the motto of Shabu Shabu Gyu Jin. And true enough, the all-you-can-eat shabu shabu buffet offers fresh vegetables and various meats such as pork ribs, wagyu beef, and pork loins imported from Japan. Do look out for its unique selections of dashi stock; instead of standard stock such as shoyu and sukiyaki, Gyu Jin offers nouveau selections such as yuzu salt and creamy rice malt dashi.

Shabu shabu joints are often casual, communal dining venues, but Shabu Shabu Gen distinguishes itself by being the only really posh joint offering Japanese hotpot. The shabu shabu lunch and dinner runs for $48++ and $148++ respectively, and diners will get to enjoy prized cuts like Ohmi wagyu and Iberico pork. Remember though: dress code is “smart elegant”, so make sure you spend some time gussying up before you head down. Where to find oishii Japanese curry rice in town

Particular about your pork? Tampopo Grand Sushi & Shabu Shabu has made quite a name for itself with its black pig shabu set that goes for a pocket-friendly $25.80. While you’re there, order up some of their famous tonkatsu as well.

You’ll have plenty of reasons to come back to Shabu Sai, because these hot pot geniuses offer a new soup base every month. From bonito & lime and Assam curry, to cheddar cheese and mala chicken soup, Shabu Sai doesn’t shy away from the unconventional. You can also opt for a ‘yin yang’-style soup pot with two different flavours.

You’ve got lots to choose from at VivoCity, but if it’s shabu shabu you’ve a hankering for, make a beeline for Shabuya and take advantage of their affordable shabu shabu sets. Enjoy meat platters like the Angus striploin and ribeye ($32.90) as well as the Kurobuta pork loin and collar. And to add to that, its modern well-lit interior is perfect for some Instagram-worthy snaps of your shabu shabu.

Craving a lunchtime shabu shabu fix? You’ll struggle to find a better deal than Suki-Ya’s all you can eat weekday lunch buffet ($14.90++, valid at all outlets except Plaza Singapura and Bugis+). While its selection of beef, pork and chicken cuts aren’t spectacular as other restos, its selection of soup bases more than makes up for it; pick from choices like the classic kombu stock & simmered kelp, to the creamy butaniku broth and the spicy kimchi with miso.

While Black Cow may have a focus on beef bowls, this modern Japanese restaurant also utilises its high quality beef cuts in its shabu shabu offerings. Expect premium meat grades like Matsusaka A5 marbled beef and black pork flown directly from Japan, as well as a selection of sake and even Champagne,  befitting of such a swanky venue.

Want more Japanese? Read our guide to the best sushi restaurants in Singapore, as well as our full review of shabu shabu at Sakurazaka.