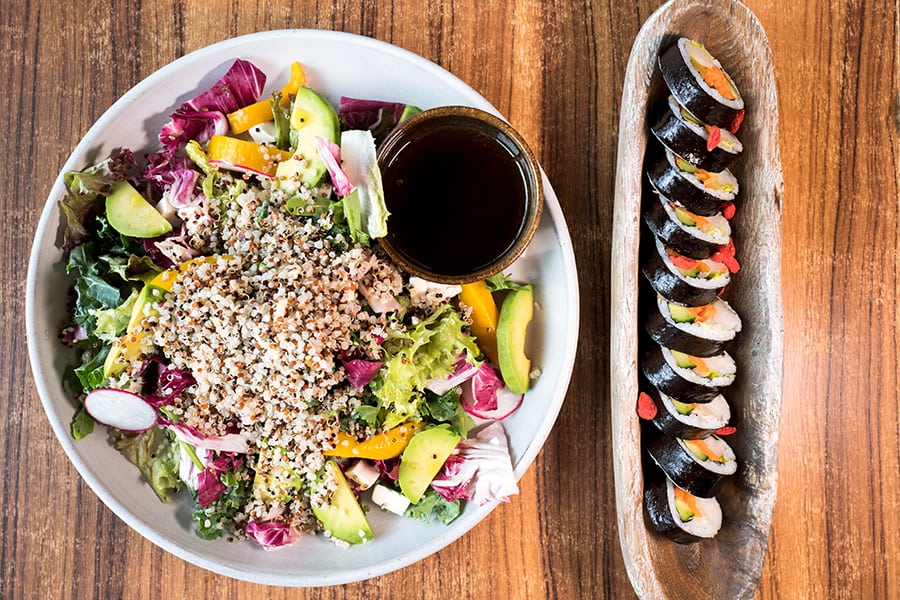 Healthy quinoa salad and Korean pear kimbap at The Joomak

Craving something sweet, sour and spicy? Give the new vegetarian menu at The Joomak a try for ultimate, ma-shi-saeyo noms

As plant-based diets are getting more and more popular, vegetarian restaurants are popping up in The 852, such as Green Common, 2DP and Veda. There are also an array of restaurants with great vegan options, and one that has been on our radar is The Joomak – the famous Korean restaurant located in LCX, Harbour City. Recently they launched a full vegetarian menu (and all-you-can-eat vegetarian buffet available every Wednesday!), so we decided it was time to try it out.

Korean food in TST at The Joomak

The Joomak HK has launched a new vegetarian menu and we love it! Read full review: https://bit.ly/2LQX0lJ

The new vegetarian menu at The Joomak

The Joomak, the name itself meaning Korean-style bistro/pub, was established by Korean chef Steven Lee who went to school in North America and worked at restaurants in Italy, China and Australia. Located in LCX (with a view of the beautiful harbour), The Joomak is a cosy restaurant perfect for friends to connect with each other, as well as business lunches and casual dinners.

To start off this exciting vegetarian feast, we tried their signature grilled sweet corn and savoury pancake (aka jeon). Topped with vegan cheese and purple potato, the grilled sweet corn is succulent and indulgent – especially when all the vegan cheese has melted to perfection, yum. Unlike typical Korean pancakes which can be oily, the kale jeon is a great alternative for healthy eaters, and they’re soft on the inside! 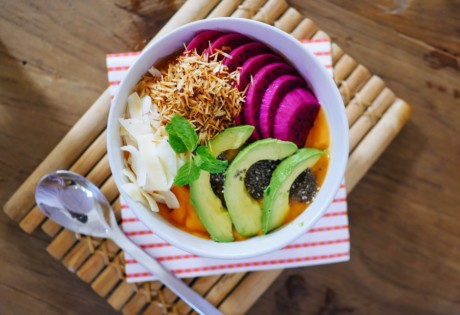 11 vegetarian restaurants to green your life

The healthy quinoa salad is served with a generous portion of fresh greens and fruits, including baby spinach, rocket, kale, mango and avocado. This zesty salad is definitely one of the hearty options that we recommend trying before eating some other heavy duty fried food (you will see). Also, when it comes to Korean food, who can resist Korean kimbap? The Joomak variety consists of pear, cucumber, carrot and pickled daikon. It’s light, refreshing yet flavourful – we cleared that plate right away.

Want something sticky and gooey to munch on? The spicy vegan tteokbokki (Korean stir-fry rice cakes) ticks all the boxes. Even though the rice cakes themselves don’t have much flavour – as they’re just rice, duh – the sauce used to marinate the tteokbokki is thick and scrumptious. And don’t worry, it’s not too spicy, but just enough to give your palate a gentle kick; we totally understand why this is such a popular street food in Korea!

The star of the show is probably the spicy and sweet vegan chicken. Made of soy and gluten, the fried vegan chicken is crispy on the outside and chewy on the inside. Best served hot and drizzled with Korean hot sauce, this game changer even won over our meat-eating photographer. So, who says vegans can’t indulge in deep fried food? #supreme

If you’re a fan of fruity or sweet drinks (with a subtle sour taste), don’t miss out on trying the raspberry fruit vinegar iced tea. It’s a summery drink perfect for two. And definitely Insta-worthy.

Personally, this last dish was one of my favourite items on the menu. Offering three flavours (two of which being vegan) – sesame, strawberry and Korean ginseng and honey – the milk pudding is made of almond milk, coconut milk and chia seeds. Not only does it smell aaaaa-mazing with all the grounded sesame seeds on top, the pudding itself has a lovely firm texture – making it one of the most satisfying vegan desserts and a perfect ending to this feast.

Online Yoga and Pilates for Charities

Easter Holiday at The Upper House