Calling all theatre lovers: mark your calendar with these musicals and plays coming in 2018. Better get your tickets for Evita and The Lion King now…

Who says you have to go beyond borders of Singapore to catch the best of Broadway and the West End? We’ve seen the likes of West Side Story and Sound of Music, now get ready for more international hits such as The Lion King, Legally Blonde, and Mamma Mia coming to our shores this year. And if you’re a die-hard theatre enthusiast, then you might also be familiar with our list of homegrown theatre productions and annual arts fests such as the Singapore International Festival of Arts which are jam-packed with both local and international theatre productions. From romantic comedies to captivating dramas, here are the hot tickets!

SIFA
26 April-12 May
The highly anticipated Singapore International Festival of Arts (SIFA) returns from 26 April to 12 May with more theatre productions amongst a plethora of artsy stuff worth checking from film to music and dance. Check out two Southeast Asia premieres — the theatrical adaptation of George Orwell’s 1984, created by Robert Icke and Duncan Macmillan, as well as German director Thomas Ostermeir’s take on the 19th-century play, An Enemy of the People. And book your seats for Singapore’s very own A Dream Under the Southern Bough — The Beginning by Toy Factory Productions.
Singapore International Festival of Arts, 26 April-12 May 2018, various locations. Tickets are available via SIFA 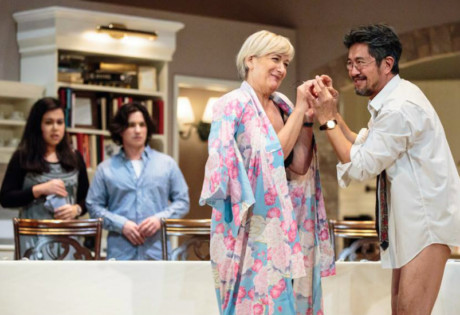 Esplanade presents The Studios
29 March-29 April
Celebrating 15 years of theatre, The Studios will be presenting four new commissions and one reworked production by Singapore theatre-makers. Based on the theme of ‘Between Living and Dying’, #supportlocal by sitting in for Faith Ng’s A Good Death about a doctor and her patients, Kaylene Tan’s In the Silence of Your Heart, an in-ear audio experience of a paralysed man’s memories, Michelle Tan’s I am trying to say something true, and Edith Podesta’s Leda and The Rage, a personal story on the daily struggles and recovery of a woman facing post-traumatic stress disorder. Zizi Azah Abdul Majid’s critically-acclaimed How Did the Cat Get So Fat? will be reworked and performed with puppetry.
Esplanade presents The Studios, The Esplanade, 1 Esplanade Drive, Singapore 038981. Tickets are available via Esplanade.

Legally Blonde
10-27 May
Omigod, it’s time! This 2018, go blonde — Legally Blonde. Yes, the well-loved chick flick has its very own musical! The New York production brings the story of Elle Woods who followed her ex-boyfriend to Harvard Law School to win him back only to discover herself with a little help from her friends and chihuahua buddy Bruiser. Prepare to be blown away by the romantic comedy’s catchy tunes, dynamic choreography, stage sets, costumes and video elements whilst staying true to its blockbuster plot.
Legally Blonde, 10-27 May 2018, Mastercard Theatres at Marina Bay Sands, 4 Bayfront Ave, Singapore 018973. Tickets are available via SISTIC and Marina Bay Sands.

Underclass
16 May-3 June
Theatre geeks, you’re in for a treat! The Necessary Stage and Drama Box are teaming up for Underclass, a multilingual and thought-provoking production that reflects social inequality and human dignity in Singapore, following the story of Xinyi who strikes up an unlikely friendship with Johari. Written by Haresh Sharma and directed by Alvin Tan along with Kok Heng Leun, the cast includes award-winning veteran artists and young talents to look out for.
Underclass, 16 May-3 June 2018, #B1-02, The Necessary Stage Black Box Theatre, 278 Marine Parade Rd, Singapore 449282. Tickets are available via SISTIC

The Lion King
27 June-5 August
Simba, Scar, Timon, Pumba and Rafiki will be making their way from The Pridelands to our shores to celebrate The Lion King’s 20th anniversary on stage, helmed by a stellar ensemble from South Africa. After being swept away by its Marina Bay Sands debut in 2011, there’s no doubt its return will be as flamboyant, theatrical, and innovative with its impressive selection of props, puppets, and costumes that literally reached out to the audience. Don’t be shy to belt along to timeless numbers like “Can You Feel The Love Tonight” — Hakuna Matata, right?
The Lion King, 27 June-5 August 2018, Mastercard Theatres at Marina Bay Sands, 4 Bayfront Ave, Singapore 018973. Tickets are available via SISTIC and Marina Bay Sands.

Mamma Mia!
3-18 November
Here we go again! Memorise the Abba classics and save the date for a wedding you’ll never forget. Before the sequel to the 2008 Mamma Mia film hits the big screen (let’s forget Pierce Brosnan’s brutal singing abilities for a minute), book tickets to the international tour of this Abba jukebox musical that will have you falling in love with the characters, story and music that makes it such a smash. Follow Sophie’s quest to discover her real dad and a love story that will have you singing “I Do, I Do, I Do, I Do, I Do” on loop in your head.
Mamma Mia, 3-18 November 2018, Mastercard Theatres at Marina Bay Sands, 4 Bayfront Ave, Singapore 018973. Tickets are available via SISTIC and Marina Bay Sands

The ones we’ve caught

As You Like It
23-25 February
We all know Shakespeare’s productions were originally played an all-male cast, (yep, even the female characters were played by men). Here’s the current-day twist: say hello to the all-female cast of Shakespeare’s As You Like It — The HandleBards! Dubbed the world’s first cycling theatre company, The HandleBards will be delivering all sorts of energetic stunts with the necessary set, props, costumes, as well as dialogues that will have you laughing out loud. So get ready to be wheeled into the story of the exiled Rosalind and Orlando who become entangled in a strange game of love and an even stranger case of mistaken identity.
As You Like It, 23-25 February 2018, SOTA Drama Theatre, 1 Zubir Said Drive, Singapore 227968

Evita
23 February-4 March
If you know all the lyrics to “Don’t Cry For Me Argentina”, then you’ll be buzzing to know that the original Broadway and West End production of Tim Rice and Andrew Lloyd Webber’s smash musical Evita will be packing “Another Suitcase in Another Hall” to the Lion City in February 2018. Step into the life of Eva Peron, wife of former Argentine dictator Juan Peron, and follow her journey from humble beginnings to being hailed the ‘spiritual leader of the nation’ by the Argentine people.
Evita, 23 February – 4 March 2018, Mastercard Theatres at Marina Bay Sands, 4 Bayfront Ave, Singapore 018973

Like this story? Here’s more we think you’ll enjoy:
Local theatre groups and companies you need to know about
Check out what’s on in December 2017
Expect a royal return by The Lion King in June 2018
This local band does music and poetry