“It's become a necessity for me to write about stuff I deal with or experience in my life. There is no difference between writing a personal love song or writing about anxiety.”

If you’re a fan of alternative bands like The Bilinda Butchers or Föllakzoid, then you’re probably excited for the return of Sleep Party People. Proudly presented by White Noise Records, the Copenhagen-based alternative act will perform in Hong Kong for the third time as a five-piece live band at Y [email protected] Square on 2 June. Having released four full-length albums brimming with sweet melancholy, Sleep Party People has continued to impress listeners with his whimsical charisma and memorable experimental tunes. We interviewed Brian Batz, the man behind Sleep Party People, about the emotional content of his latest release Lingering, his favourite playlist and instrument obsession.

Hi, Brian. Thanks for chatting with us. Last time you guys visited Hong Kong was at Clockenflap during daytime, and what everyone thought was – do you guys feel really hot and sweaty wearing the rabbit masks in your designated black outfits?

Yes, indeed. We sweat a lot during the concerts. That’s the curse of the Sleep Party People trademark and outfit. It’s soooo hot playing a concert in felt mask and with hoodies and long black jeans. I always see it as an exercise and a way of keeping myself fit during a tour (laughs). I didn’t really think things through back in 2010 when I decided to wear that outfit on stage. A rookie mistake, I guess. But it’s still fun and a different experience to wear this outfit than wearing normal clothings on stage.

I’ve read that the song Fainting Spell is about social anxiety as a child and an adult…? How do you feel about putting these insecure parts of yourself out into the world?

To me it’s really important to write about personal issues and I honestly don’t mind sharing it with my listeners. If people can relate to what I’m writing about then that’s just more meaningful to me. Anxiety has become a very common thing in today’s society. I guess that’s why I don’t feel ashamed to put it down in words or be in doubt wondering whether it’s a good thing to share it.

One of my favourite tracks from Lingering is The Sun Will Open Its Core. What’s it about?

It’s about how Denmark is handling the whole refugee matter. In my opinion, we (the government) didn’t do a very good job at helping, nor did we show any sympathy whatsoever for the many refugees, who tried to enter our country. That left me numb and speechless.

To be honest, I don’t see how a country with a strong welfare society can neglect and not help in such situations. Imagine if it was us, we would want someone to help us, right? I was just really surprised by our actions in the whole matter and felt very embarrassed about being a dane. Normally I don’t write political lyrical content, but this just felt very natural and important to write about, to keep reminding people about this horrible situation millions of people are in.

Lingering seems to exude a “happier sound” with tracks like The Missing Steps which practically throws you into a love bubble. What has changed in terms of music experimentation or expressing your emotions compared to your previous albums?

I’ve always been drawn towards writing more dark and melancholic music, but on Lingering I wanted to approach the process differently than on my previous albums. I was aiming for a more positive and lighter sound, so I’m thrilled that you have that experience.

I spent a lot of time on the songwriting and especially tried to push myself in terms of chord structures. As I said earlier it’s very important for me to keep evolving and not to replicate myself. It’s too easy to write the same album twice and it’s not that satisfying to repeat yourself, which is why I felt it necessary to re-think my sound on Lingering.

So this is your fourth album, do you feel more confident in being an unconventional music maker now?

I don’t know if I’m an unconventional music maker – haha! But yeah I feel more confident now as a creative person than ever before. I’m always trying to evolve as an artist and of course that might lead to periods where I’m not that confident or where I don’t believe in myself that much, like being in doubt if I’m doing the right thing or moving down the right path. I think that’s the common struggle you go through as an artist – trying to not overthink the process and to follow your intuition makes you quite insecure at times. 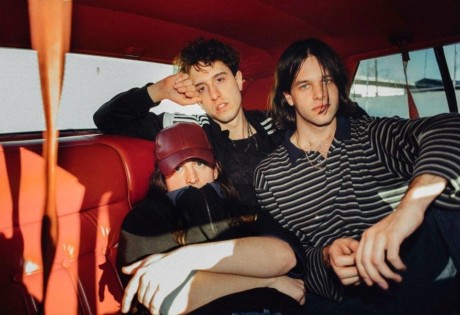 I’m Not Human at All apparently is one of your most popular songs and a masterpiece, what do you feel when you play it live – back then in 2010 and right now?

Thanks! Well, I guess nothing has really changed. I still love playing that song live and I think the main reason why it’s still fun to play is because people often go fucking mental when they hear it. It’s always a huge pleasure to hear the audience sing-along. And I’ve also played the song in different band constellations, so its feel has changed over the years, which is why it’s still one my favorites to play live.

What gear or instruments are you currently fond of using?

I recently bought an old synthesizer called Yamaha SK30. It’s an old stringer, which has this very rich and wooden sound to it. It’s pretty similar and has some of the same components as the classic Yamaha CS80, which is known for being used by Vangelis on the Blade Runner soundtrack. Killer synth!

I’ve also just bought an old digital delay rack unit called Lexicon Prime Time 93, which is one of my all-time favorite gears in my studio. I use it on almost everything now. It’s my to-go-to machine these days. It’s especially awesome on vocals, but its main thing is that it can freeze your signal and pitch it up and down as you please with a different delay time on the left and right side. The lower and slower delay you use, the lower quality the sample rate is, which is what makes this machine stand out from any other delay machines out there. Nothing can be compared to the Lexicon Prime Time 93. Nothing. Amen!

Can you share with us your currently playlist? Personally I check out your spotify account “Brian Batz” when I’m in search for new music.

Oh nice! I hope you find something you like. I have this playlist called “Sheeeeeeiiit”, which contains all sort of music. New and old, but mainly songs which have caught my attention and kind of guided me in a more inspirational way.