Somersault overwhelms listeners with multitudes of emotions and ounces of truthfulness, we chatted with Beach Fossils to see how the album came about

If you fancy a dreamy musical escape, we’re head over heels obsessed with bands like Alvvays, The Bilinda Butchers and Fazerdaze. Coming from Brooklyn, daydreamers and shoegazers Beach Fossils played their live debut in Hong Kong on 22 March, 2018 and we were completely blown away. We interviewed bassist Jack Doyle Smith and guitarist Tommy Davidson on the making of their latest album Somersault, their wonderful collaboration with Rachel Goswell from Slowdive and crafting music like an open book.

Beautifully lugubrious verses blending into dreamy tunes, Beach Fossils are one of those bands that make you vulnerable, spiral deeper into nihilism – but at the same time feel received and understood. Having released their critically-acclaimed album Somersault in 2017, they return with a more diverse range of sounds and a maturation of ideas.

Hi, Tommy and Jack. Thanks for chatting with us. Where did the name of your latest album Somersault come from?

Tommy: We had a list of different words that we were using to describe the record, it was like some sort of abstract word association.

Jack: We went back and forth on a lot of things and we felt like Somersault was the closest representation of the process of us trying to name everything.

T: We thought it looks cool too, you know (laughs).

A lot of the songs on Somersault seem to be about feeling discouraged or abandoned by the world. Where was your head at while making them?

T: The lyrical content is coming from Dustin primarily and he always channels that introspective thoughts and feelings into the songs. Also, a lot of the demos we were working on were being written in the middle of the night in New York – either at a rooftop studio or in the middle of the city. It was very lonely, and I guess it naturally just reeks of a loner feeling in those ways.

J: This album generally has that reflective power at night, as it was written between the hours of midnight to 4am.

T: Headphone rocking music in the middle of the night is how we were trying to create the record.

Are there any songs on Somersault that you consider as too personal and were uncertain about putting them out into the world?

J: I think the point of Dustin’s lyrics especially is just to be honest with himself because he doesn’t know how to write a song that isn’t honest to himself.

T: Maybe there are things that even Dustin hasn’t showed us that are very personal. But as far as Somersault is concerned, we were all very comfortable with the material and the lyrics, it was an open book. In order to connect with the audience, we need to be honest in that way. It’s important to us and Dustin, basically everyone involved here.

How would you sum up the differences between your last record Clash the Truth and Somersault?

J: They are so different. This new album was a collaborative writing process, so we spent a few years writing together. With Somersault, we were finally taking our time for once, so there was no time crunch and we could just focus on how we want it to sound.

T: The previous record consists of more post-punk influence, maybe a little more in-your-face kind of feelings. Whereas with Somersault, we kind of want it to be driven by a variety of sounds, and we wanted to explore psychedelic music, electronic music or hip hop music a bit. 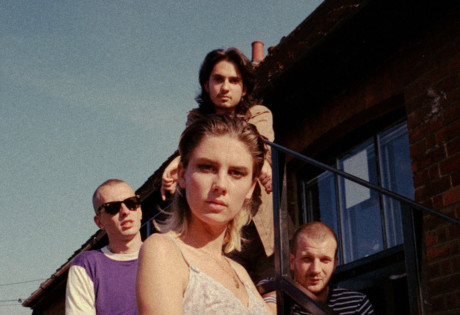 Some people think that shoegaze or dream pop music is getting more “fashionable” as more bands (or formerly alt-rock bands) seem to gravitate towards certain styles. What do you think about that so-called trend?

J: I think a sound or a trend is always going to be a thing for sure, and it’s always changing. But I don’t know, we don’t think much about it ourselves. We tried to do something that is true to us.

T: At certain points in life, we get drawn to post-punk sounds, shoegaze sounds, psychedelic or hip hop sounds, and the albums are whatever we’re feeling. That’s all you can really do. If you start concentrating too much on the trends, I think you lose yourself as an artist.

Can you walk us through your creative process; do you usually write from your stream of consciousness?

T: It comes from everywhere. Sometimes we will just jam and start making a riff; or we switch instruments, like I’ll be on keyboards, Jack on guitars and Duston on drums. We don’t really have any roles, we just switch it up and see, and when we like it and we record it.

J: And our phone will just be set on voice memo.

T: For this record, we wanted to explore as many different ways of writings as possible in different spaces, whether it be a practice space, a studio in the city or upstate in a cabin. We went everywhere while recording this record as we wanted to test all the water.

Your song Tangerine features Rachel Goswell from Slowdive. How did you guys link up? How would you have imagined the song if she had not been a part of this?

J: Oh man, it’s amazing that she wanted to do it. She said she loved the song. Dustin got the contact through his wife, Katie, since Slowdive released their record through Secretly Canadian and Katie was a part of it.

T: Also, Dustin covered Alison, a track by Slowdive, many years ago. They reached out to him online and Dustin met up with one of the members of Slowdive. So there was always this kind of initial connection with them. And while we were talking about it, it was perfect timing because they (Slowdive) started touring and recording more the same time we were writing our record. It was the perfect song for her, that’s what makes the song for us – having that collaboration with Rachel.

J: Because we didn’t have a vocal melody for that chord that fit anyone’s voice. At first we were uncertain if it was in her range either, but it turned out to be perfect.

T: Without her, the song wouldn’t be on the record (laughs). We had everything in place with the song structurally, but that chorus is what we needed to work out, and the magic was there when she came on the record.

Which artists or albums have you guys been really into?

J: We have actually been listening to a bunch of electronic music.

T: Like Aphex Twin and the ambient artist Gas. He takes pop songs and slows them down like a thousand times and he makes these really crazy sweet orchestral ambient melodies. There are also Thundercat, NxWorries, Anderson .Paak, Brockhampton and DJ Shadow.

J: More confident than we’ve ever been honestly! Because with Somersault, everything kind of pulled together, how we worked as a band live and in the studio. And I think it’s working really well.

T: Because Somersault was kind of the “comeback” album – it had been four years since the second studio album Clash the Truth – and we were obviously having anxiety during the writing process. To finally have it out and have it realised that all three of us worked on it together and made it happen, we are more confident than ever. We have a system that works and we know how to channel the creative energy the right way.

Review: 5 reasons why we adore The Pontiac

All the epic food at The Chinese Library