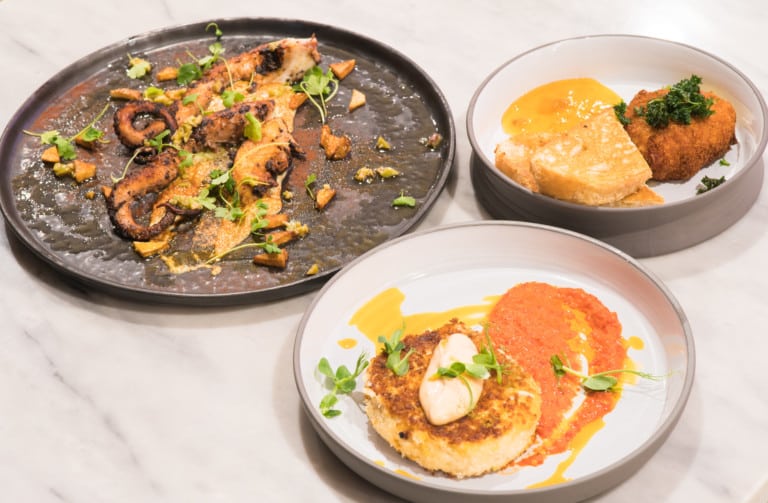 Inspired by the notion of farm-to-table, Chef Todd Williams serves up a mix of classic and new American dishes at Bizou

In Hong Kong, we have the luxury of enjoying tastes from around the world 24/7; from the best dim sum to amazing Japanese restaurants and fine French cuisine, we are never short of something to eat. Similarly, a range of cultures from across the globe have each made their mark on America, and all of their respective cooking techniques and flavours have influenced the way the nation enjoys its food. At Bizou, located in the Thomas Heatherwick-designed Pacific Place, Chef Todd Williams captures a number of these cultural inspirations and offers guests a menu that features classic dishes alongside a selection of contemporary reinventions. Why we’re big fans of Bizou

The most difficult thing about dining at Bizou is simply selecting what to order off the large menu, especially as everything sounds so good!  Firstly, kudos to the team for serving up warm bread and butter to the table when you arrive; hooray for little bits of yumminess to nibble on as you peruse the menu. We eventually narrowed our starters down to just three, and as we waited for them to arrive, we got started on some cocktails (two-for-one during happy hour!)

The octopus salad was cooked to perfection with the slightly chargrilled taste working amazingly well with the texture of the seafood. However, the star of this round was definitely the light and fluffy Boston style crab cake that was pan seared to avoid that heavy, breaded finish that many have.

For mains, we could have selected from the various USDA prime steak options available – each served with a choice of sauces, but we simply could not go past the southern fried chicken special that came with a soft poached egg and certainly ticked all the right fried chicken boxes. But the piece de resistance of the evening was the oven roasted Norwegian salmon dish that had a perfectly crisp skin and was served in a cucumber nage that brought out all the spring flavours. Salmon roe and Japanese uni added to the excitement of this dish, by throwing in a hint of saltiness. (HINT:  You must go and eat this dish before the menu changes with the seasons!)

Of course, it would have been rude not to try the mac and cheese, which Chef Todd is quietly confident is the best in Hong Kong. This dish could almost be a main due to its sheer size – God bless America – and gives you all the hearty creaminess that a good mac and cheese should.

We rounded out the evening with seasonal fruits and a delectable mandarin and chocolate tart  – so good!

Featuring a mix of warm wood and gold, Bizou has a welcoming atmosphere that extends into an outdoor area amid the huge atrium at Pacific Place. We love the way that the team has created a menu that includes traditional American favourites alongside dishes with a more modern spin. Similar to Chef Dan Barber from Blue Hill at Stone Barns, Chef Todd Williams showcases a farm-to-table way of curating a menu here and introduces some real flavour sensations.

If you’re a fan of good food, then don’t miss reading about our favourite spots around town, including Arbor, Elia and The Joomak.