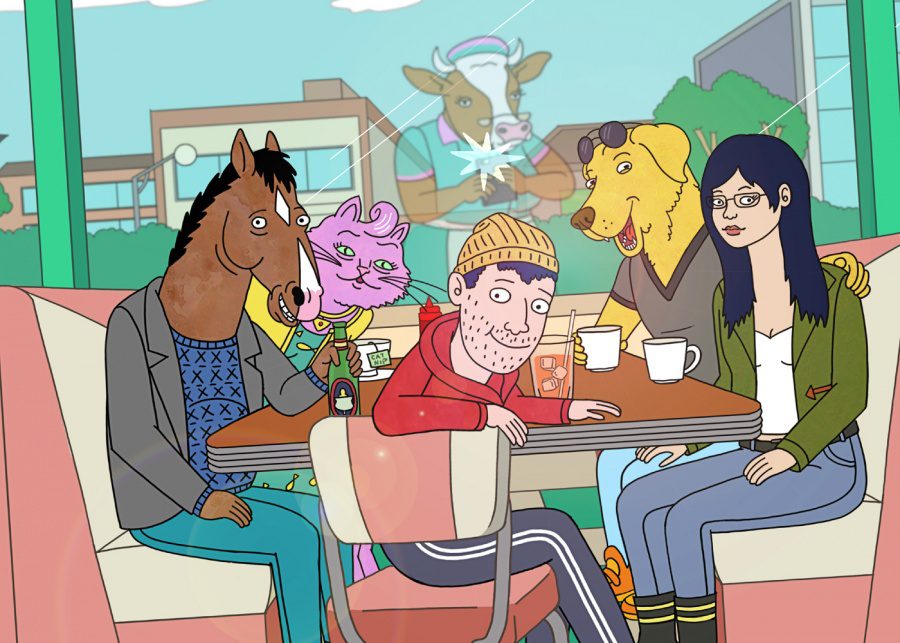 Enjoy these epic contemporary cartoons for adults. We guarantee you laughter, tears, and loads of sarcastic jokes.

Sure, you can live that healthy life by spending your weekend exploring these beautiful hiking trails and islands around Hong Kong – kudos to that! But if you’re a homebody who simply enjoys catching up on the latest bingeworthy TV shows on a beautiful Saturday, we’ve put together a list of the best cartoons for adults, too. Just don’t be offended by their honest and brutal dark humour!

A hit animated black comedy on Netflix, BoJack Horseman is one of our personal favourites. It’s set in a world where humans and anthropomorphic animals are living together. The main protagonist, BoJack. is a self-loathing post-fame Hollywood star that deals with alcoholism, depression, and many other problems. This cartoon serves as a mockery of show biz and a harsh reality check on how alienated people are, and it pokes through the façade of the happily-ever-after ending – there needn’t be a window opened when a door is closed.

King of the Hill is an animated sitcom that ran from 1997 to 2010 on Fox. Set in a fictional town in Texas, the show revolves around the Hill family and his next door neighbours and households. This slice-of-life animated show illustrates precisely the issues of discrimination, racism, internalised sexism, and complex war politics during that period. By showing the audience the flaws of certain traditional values that are antiquated, the socio-political humour has won applause from the majority of its viewers.

Rick and Morty is one of the most philosophical and ingenious adult cartoons broadcasting on Adult Swim. The story revolves around Morty, a kid with a learning disorder, and his grandpa Rick, a self-righteous mad scientist who travels through universes and dimensions causing catastrophes. Every character in the show is dysfunctional, and there is no hero nor villain. The show touches upon the absurdity of existence, and that survival is just romanisation of meanings and ideologies that we feed ourselves in order to survive in a numbing capitalistic society as a collective being. Are we alive? Are we just clones? Rick and Morty questions the authenticity of life and provides a meta viewing experience.

Aqua Teen hunger Force follows the surreal adventures of three anthropomorphic fast foods: a selfish milkshake, a box of smart French fries, and a ball of simple-minded ground meat. The protagonists barely get along with their balding middle-aged neighbour, and in the meantime interact with a number of villains and aliens. It’s definitely a funny one for fans of Adult Swim.

One of the best cartoons from the 90s has to be Beavis and Butt-Head. The series revolves around the lives of two silly and ill-intentioned teenage delinquents who only find things interesting if they’re associated with heavy metal, violence, sex, and destruction. Because of its controversial content, MTV even had to put up a disclaimer at the top of every episode that the two weren’t role models.

Animals is one of the best adult cartoons on HBO. Each episode consists of a different storyline with different types of animals – as representation of different categories of New Yorkers – and a few recurring characters (or animals). It follows the lives of animals that reside in New York, a few human characters, such as a corrupt mayor and officials behind a virus outbreak and propaganda to show how foolish and pathetic human behaviours are in the eyes of other forms of creatures – even if the animals depicted here are probably no better.

Gravity Falls is a cartoon that is entertaining for both children and adults on Disney Channel. The animation revolves around the adventures of brother and sister, Dipper Pines and Mabel, and their great-uncle Stan living in the mysterious town called Gravity Falls that is inhabited by supernatural creatures and paranormal forces. And if you’re a fan of Rick and Morty, Gravity Falls is actually said to be one of the multi-universes in that show. In fact, there’re hints and Easter eggs dropping everywhere if you look closely into both programmes – as the writers are really close friends, even though Gravity Falls doesn’t contain such a dark world perspective in comparison. Regular Show is the only light-hearted and adventurous cartoon to make this list. The animated series is set in a park where surreal and supernatural misadventures always take place. And the residents of the park, which are a mixed bunch including a blue jay, a raccoon, a gumball machine, a man with a lollipop-shaped head, and a yeti, are often getting out of their way to put things back to “normal”. The show reeks of creativity and imagination, and is one of the best cartoons for both adults and kids.

Semi-autobiographical animated sitcom F is for Family is a Netflix original written by Bill Burr, who is also the younger son of the Murphy family as portrayed. It’s set in the 1970s when it’s appropriate and common to smoke indoors, uphold patriarchal notions, deprecate women, and to emotionally abuse your children. The show discusses the problematic side of domestic emotional trauma happening inside traditional households, and it once again reminds us how society needs to progress further on equality and banish unjust stereotypes.

Bob’s Burger is one of the best received family-friendly animated series in recent years. It’s about the Belcher family who run a burger restaurant and the hilarious things that happen around them. The Belcher kids are a mix of awkward teens and troublemakers, and it’s always funny to see a fraction of your younger self being acted out onscreen. This series has many uplifting insights and heartwarming messages to offer, and it definitely helps people to overcome obstacles in life.

Having been around since 1989, The Simpsons is undoubtedly one of the best cartoons of all time. Following the lives of the working class Simpsons family, the show is a critically acclaimed satire of American culture and the American dream. From the country’s politics and religion, to family disputes and personal beliefs, The Simpsons has found the perfect medium to criticise the ridiculous things that happen around us. Every character in the show seems to remind us of someone that we know; there’s always that billionaire at the top, a clown that is tired of the show biz, and an inadequate person in a position of power that fails to solve any problems.

Originally broadcasted on MTV from 1997 to 2002, Daria has become the ultimate figure of sarcasm and cynicism. As an outcast being surrounded by a bunch of jocks and cheerleaders in high school, the protagonist Daria Morgendorffer ridicules the superficiality of American pop culture and the education system. Daria taught us that it’s okay – if not better – to be a cynical critic than a happy-go-lucky, ignorance-is-bliss type of individual in this Sick, Sad World (pun intended).

What’s a ‘best adult cartoon’ list without South Park? Originally broadcasted on Comedy Central and now available on Netflix, this legendary show revolves around four boys – Stan, Kyle, Eric, and Kenny – and their adventures in and around their town in Colorado. Notorious for its use of strong profanity and dark humour, South Park satirises a variety of topics, such as politics, celebrity culture (with frequent tongue-in-cheek impersonations), religion, and more. If you’re a fan of absurdist and surreal humour, South Park is for you.

If you can’t stand gore or graphic violence, look away, because Happy Tree Friends isn’t exactly for the faint-hearted. Even though this show is a cartoon and it has the word ‘happy’ in its name, don’t be fooled – the cute and cuddly anthropomorphic animals always die a sudden (and terrible) death as each episode progresses. However, for those of you who have a twisted sense of humour (we ain’t judging!) and/or constantly suffer from existential crises, Happy Tree Friends might just make you chuckle.

Of course we can’t leave Family Guy out of this list! One of the most famous cartoons of all time, this animated show follows the lives of those in the Griffin family – Peter and Lois, who are parents to Meg, Chris, and baby Stewie. They also own an anthropomorphic dog, Brian. While early episodes revolved around Stewie’s supervillain antics (he’s a little demon, really, and everyone loves him for it – sort of), the series has become, more generally, a satire towards pop culture and it’s been praised for being capable of making a joke out of almost everything.

Toxic positivity can do more harm than good