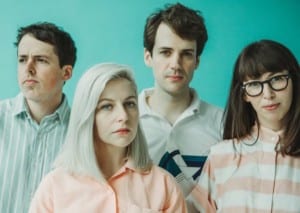 “I think people have learnt to accept me for who I am, which is a fairly lethargic introvert,” says Molly Rankin, frontwoman of Alvvays, as we interview her prior to the band's debut at Clockenflap

We’re always here for excellent music, including the sounds of Snail Mail, Fazerdaze and My Little Airport. Having made their long-anticipated first appearance in Hong Kong last year, Toronto-based indie band Alvvays is perhaps on top of our must-see list when it comes to great music. We interviewed frontwoman Molly Rankin about being an introvert, the ups and down of Alvvays’ creative career, as well as her favourite food and guilty pleasures.

An interview with Molly Rankin from Alvvays

Formed in Toronto in 2011, indie band Alvvays released their self-titled debut album in 2014 and are most known for their fierce hit single Archie, Marry Me. Returning last year with their beautifully melancholic sophomore album Antisocialities – packed full of shoegaze reverbs and synth-driven pop punk bops in songs like In Undertow and Saved by a Waif – the album has been named one of the best indie albums of 2017 by critics. With Molly Rankin’s distinctive voice and the band’s down-to-earth (also awkwardly introverted) personality, it’s no doubt that Alvvays are destined to take over the dream pop scene in no time.

Hi, Molly. Thanks for chatting with us. Since the album is titled Antisocialites, it seems appropriate to ask: Are you sick of interviews?

Haha… yeah…? No (laughs), I think I’ve done maybe a few Japanese interviews but really it has been a while. The album has been out for a year, so I’ve had a little bit of time and space to refresh.

You’ve known Kerri (keyboardist) since kindergarten and the boys have known each other for a long time as well, is it hard to stay productive working creatively with your super close friends?

I don’t think it affects our band that much, we’re all close friends. We go out together when we’re not touring. I see Kerri a few times a week, we watch a lot of NBA basketball games together. I think if anything, we know how to lighten the mood and keep things slightly funny if need be.

So if you and Kerri are to be described as an animal, what would they be?

Kerri really loves dogs but I think she’s more of an owl. She’s extremely sharp. She has a very keen sense of humour that I don’t think anyone else I know has, beyond maybe the rest of her family. For me, I think I would probably be a mole or a shrew.

What’s downtime for you guys like back in Canada?

I’m working on new music now. We returned from the US last night but I don’t have a day job anymore. So I just make music and go for a walk, try to exercise, clear my mind and write songs. Very strange.

Do you guys have any guilty pleasures, such as watching trashy TV shows?

I think Kerri might watch The Real Housewives, there is a Canadian version of it that she’s familiar with, I haven’t seen that before. We watched Jerry Maguire the other night which was a blast (laughs).

I remember most of the Alvvays members are vegetarians right? What is your favourite food?

Yeah, most of us still eat fish and Sheridan (drummer) might be the only one who occasionally eats meat. For favourite food, I’d probably say Vietnamese food, like pho. I think we can all agree on that. Now back to your latest album Antisocialites. The music video of Dreams Tonite sends us back to old-time Montreal, where did that inspiration come from?

I know Alec (guitarist) has always been really into Expo 67 and he has been hunting for footage of that for a while. So we had gotten together with the director Matt Johnson, who is a master of doing a lot of replanting per people in archival footage, and we had the idea to get some of the footage from National Film Board of Canada and see if we can place our current selves into it. It’s a real romantic era and I think he did a really great job.

The ending track Forget About Life is my favourite. I’ve seen on the Internet that it’s about a post-apocalyptic world, can you tell me more about the sentiment behind?

There was a period before we recorded our record that our band had lost all of our money. It was a really dark week for me, so I thought about jumping into the ocean many times and that’s basically where that came from. It’s not really post-apocalyptic though. I think whoever came up with that… good job (laughs). But that song really did come from a dark place.

There is a great line “forget all the party police, we could find comfort in debauchery” in the song Party Police from your self-titled debut Alvvays, where did that come from?

I think I was living in a place where I was so conscious of who I was. I moved to a different part of Canada where I didn’t really know anyone. I guess I was sort of talking myself through life at that point. Just not being afraid of being judged or behaving in one way or the other, and being reckless and young.

How would you define success and when was the hardest period in Alvvays’ creative career so far?

There is crazy good and crazy bad I guess, that would be on the bad end of the spectrum. As far as success goes, I think anytime we feel we’ve had a really great set, that’s how we measure where we are as a band. I know we had some good shows recently like in Brooklyn and in Philadelphia, which were the end of our North American days. We felt really good after that tour, like we had really grown as a live band.

Anytime you go to a festival where people are there to see big radio bands or big radio pop stars, and there are people in the crowd who come to your early set and know the words, for us that’s gratifying.

I actually saw you guys live in Oakland earlier this year, I was that excited girl who met you and was like: “I flew from Hong Kong to see you guys!”

Oh my goodness! Did I see you outside? (Yes, at the parking lot.) I’m so glad to meet everyone there. I had no idea that was you, that’s so sweet.

At the time you were only planning to tour in Japan, and now Hong Kong is also in the picture, how do you feel about touring in Asia for the first time?

We’re so excited. I know we’ve wanted to go to Asia for a long time even on the last record when we had gone to Australia for a few shows, this time around it’s nice to be doing festivals in Asia. The more the merrier as far as I’m concerned.

You mentioned in an interview that you were supposed to be the band’s charismatic frontwoman but you thought that didn’t really work out that well. How is it going right now, especially after an intensive period of touring, are you still struggling?

I think people have learnt to accept me for who I am (laughs), which is a fairly lethargic introvert.

Well, we like your “resting-bitch” face if that’s any consolation, that is some character there.