Hipster café, bike atelier, totally kickass – that’s what we’ve been hearing about the super cool Wheeler’s Yard. If you haven’t been to Wheeler’s Yard yourself, you would have (at least) seen its iconic doors of blue on your Instagram feed by now. Here’s our exclusive interview with Tommy Ong – bike enthusiast and the BBB (big brainy boss) of Wheeler’s Yard.

We love this space – it totally rocks Brooklyn in the Big Apple! But it’s quite a secluded spot, so why did you set up shop in this location?
This warehouse is actually family property – we bought it in 1985 for investment purposes. For the last 12 years, we rented it out to a carpentry company and it was a factory of sorts. At the end of 2012, the rent was below market rate, mostly because the place was quite run-down. Yet at the same time, the park connector was built and the neighbourhood (Balestier) was changing. It sort of opened my eyes and I thought of using the warehouse as a bicycle workshop, but the space was too big. So we added a café component for customers to have coffee and food too. Since this is family property, is this a family business?
Definitely! My father started his business way back in 1957 dealing in property and cars, so Wheeler’s Yard is a new subsidiary of the family business. I believe more members of my immediate family will join us in time to come.

Editor’s note: Tommy is the oldest of 9 siblings (like many of the old Chinese families in Singapore). On the afternoon of the interview, we spotted his brother, TC, working on bikes, and his nephew, Bang Jun working the café counter. Another brother, Daniel, is in charge of the kitchen, and even Grandmother Ong was present – family business indeed! 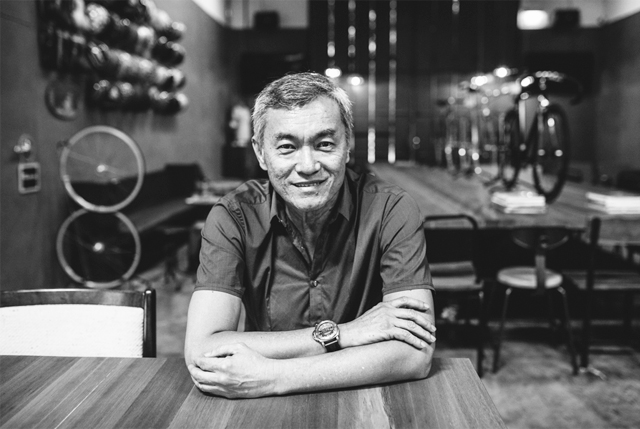 So, we hear you’re a bike enthusiast! What do you think of the cycling culture in Singapore?
Bicycles have been trending for the last 10 years in Singapore, and it’s still picking up, especially with the government encouraging people to cycle. You can see that from our parks and park connectors. We still don’t have bike paths, but they will probably come later.

Wheeler’s Yard has hosted more than a few private events in a short amount of time – do you have a favourite?
The launch of Burberry Brit Rhythm, for sure. It was our first and I think, naturally, the most exciting event because it’s a big name, and there were some famous faces here too (Editor’s note: including the face of Burberry Brit Rhythm, British model Suki Waterhouse, and British band White Lies). After that, we had a BMW car launch here too. There are more interesting events coming up that can’t be disclosed, so all I can say is, watch this space! We’ve heard Wheeler’s Yard being labeled as ‘hipster’ more than anything else. Do you think that it’s a positive thing, and would the business be sustainable in the long run?
I think so. Every generation has a term for themselves – in my time, the teenagers were hippies, and now, it’s the hipsters. I think we present ourselves pretty well, because not many have this location and space. For instance, with all the warehouses in the West, it might not work there – but the same reason is why it’s not likely to fade out in Singapore. Also, I think people, young or old, are quite nostalgic these days. Balestier is one of the oldest neighbourhoods in Singapore, so I believe those who have been here will like it enough to come back for more.

Do you think Wheeler’s Yard just made way for a revitalization of the neighbourhood like Tiong Bahru?
Putting bikes and cafés together in one space is a new concept in Singapore, so we’re getting a lot of attention as pioneers. I believe that Balestier has changed; enough that we felt that this place was certainly going to take with many people. So, I think the time for revitalization of the neighbourhood is ripe, and that’s good for the whole area. What’s next for Wheeler’s Yard?
We’re looking into expanding, such as bringing other bicycle-related or sports related merchandise into Wheeler’s Yard. We might also expand overseas, but it probably won’t be another Wheeler’s Yard. Instead, it’ll be something that the people in that country need or want.

Last question before we head off to admire your bicycles proper: why are the main doors (the blue ones) of Wheeler’s Yard always closed?
I wanted to create our storefront to be one of the iconic doorways in Singapore – it adds to the mystery, don’t you think? Then, when you come in from around the side, I think there’s quite a big wow factor there, especially if you’re here for the first time!

Thanks for having us, Tommy!

Emily is as curious as they come and a total travel junkie, so she's always in the know when it comes to finding new places to explore, and cool news and products online, in the shops and around town.