We can't always wait for Oktoberfest! These places that serve Austrian and German food in Singapore are as authentic as it gets

You don’t need to wait for Oktoberfest to get batty over bratwurst, so don’t get your lederhosen in a hitch! A feast-worthy niche of European food that always promises a hearty feed with its heaps of meat and dollops of gravies – perfect, of course, with a couple of pints of beer – Austrian and German cuisine are two traditions that you can wolf down in this cosmopolitan city of ours. And mind you, there is a difference between these two cuisines, despite them sharing dishes like sausages and schnitzel. But for the sake of convenience, we’ve gathered a bunch of both Austrian and German restaurants that will likely hit the spot if you miss grub from these parts of the world. From currywurst to crispy pork knuckle, these joints will have you yellin’ “Wunderbar!” at the table.

Arguably the most commercialised of the lot on our list, this German bar and restaurant franchise has got branches all over Singapore, China, Australia and other parts of Southeast Asia. Spreading the goodness of German grub all around the world, Brotzeit does so authentically with mains like spiral-shaped Thuringer rostbratwurst, onion steak, slow-roasted pork in dark beer sauce, and roasted liver in dunkel weissbier reduction. It’s also a fave haunt of ours for a beer-chuggin’ happy hour!

Yet another peculiar find in a coffeeshop, Stew Küche has taken up residence in Alexandra’s Salute Coffeeshop over the past couple o’ years, turning the homely heartland into a spontaneous beer garden. For just $17, you can have yourself a half pork knuckle served with mashed potatoes, achar and a strong dark beer sauce; or if you’re feeling more Asian, pair it with rice! You can also share a sausage platter with your pals for just $28. And yes, you can find German Veltins Beer here too – cheers to that.

Featuring the food you’d encounter in Habsburg nations like Austria and Ukraine, portions at Kaiserhaus are huge (top marks for food sharing here). For mains, brace yourselves for a lavish, Austrian-style spread. The chef-recommended Tafelpitz ($38 for a single serving) is a gourmet beef dish made of grain-fed beef (rump and oyster blade) served in a copper pot with beef bouillon and vegetables. While The Salon Beauschl ($24) – or more commonly known as Veal Ragout – is a traditional Viennese favourite. This hearty, meaty dish made of veal heart and lungs, is served up with bread dumplings and is deeply satisfying for a carby, chilly evening.
Kaiserhaus, #02-06 and #03-06 Capitol Piazza, 17 Stamford Road, Singapore 178907, p. 6377 0013. Open Mon-Thu 10.30am-12am, Fri-Sat 10.30am-1am, Sun 10.30am-12am.

As Singapore’s only German microbrewery and restaurant, you can bet that Paulaner Brauhaus has quite the reputation amongst Germany gurus here. Food highlights here include breaded pork schnitzel with fresh mushroom sauce, sausage samplers served with sauerkraut, and even German-style rye pizzas. And with an alfresco beer garden on the second storey, you’ll never wanna leave this boozy heaven with its custom-made light and dark beers.

It’s hard not to feel intrigued when you chance upon a joint that dubs itself “the last sausage kiosk before the Equator”. Such is the light-hearted, cheeky brainchild of Austrian chef (and now, Singapore native) Erich Pollski. Despite having to shift from its original Chinatown locale, this Wuerstelstand – now tucked unassumingly within a heartland coffeeshop – still dishes out Austrian and German comfort food in the form of spiced sausages and home-made bread rolls. Flash in the pan? Hardly. Chef Erich has been at this for over 10 years!

You’re probably well-acquainted with Germany’s Berlinners, Münchners and Bavarians. But are you savvy with the Swabians? Swabian culture is prevalent in Stuttgart, in the Southwest region of Germany. And if there’s one Swabian specialty you’ve definitely heard of, it’s the black forest cake that this café serves. Other traditional treats include the Maultaschen (think German ravioli), sausages, pork schnitzel and Gockele chicken. 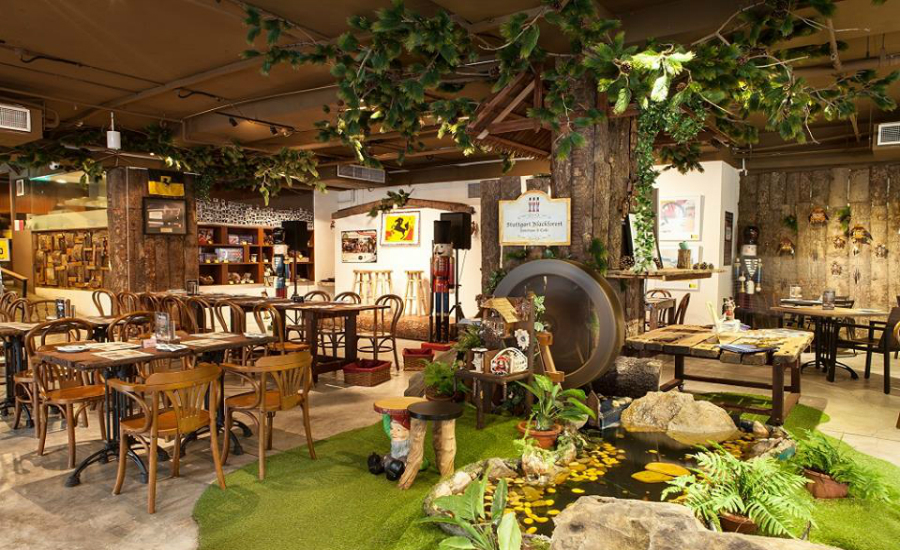 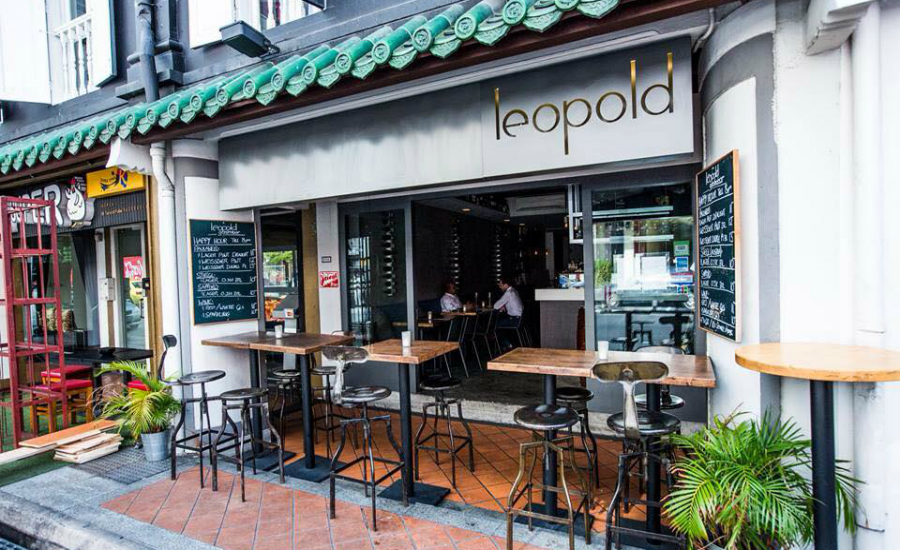 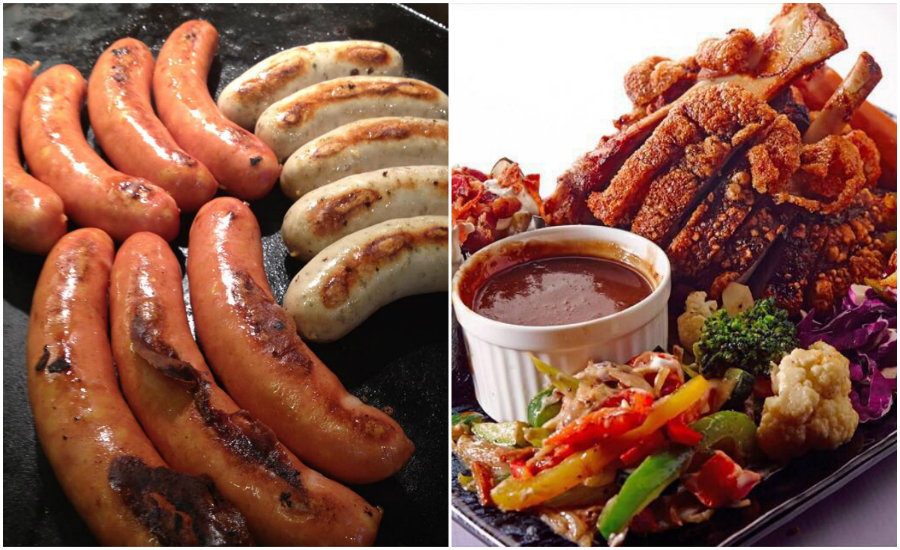 Why is an European restaurant that serves Alpine cuisine on this list, you ask? Unless our memory from Geography classes is failing us, we’re pretty sure the Alps mountains stretches across Germany and Austria, as well as other nations like France and Italy. So not only will you find foie gras and carpaccio here, but also breaded and pan-fried wiener schnitzel, and an elusive dish that’s nearly impossible to come by in Singapore – truffled griessnockerl (Austrian semolina dumplings) served in beef broth.

It’s not just the Spaniards who get all the fun; the Austrians have their own tapas too! Leopold Gastrobar serves Austrain tapas in a bistro-styled setting, eponymously conceptualised by Chef Klaus Leopold. Small sharing plates include cheese sausages (käsekrainer), curry sausages (currywurst), slow-roasted marinated pork collar (schweinsbraten) served with sauerkraut, and Austrain chicken stew (geschnetzeltes). And for desserts that even native Austrians would approve – Leopold actually has a sticker certifying “What Grandma Would Order” – go for the Austrian apple strudel or apricot dumpling.

Out of all the European cities we’ve visited, Berlin is one of the reigning few with its history, street culture, nightlife and, most of all, its food. So we’re chuffed to find an eatery that’s adopted the German capital in its name. And true to its moniker, you can find German nosh staples like crispy pork knuckles and a selection of sausages that encompass everything from spicy chicken and brockhurst, to pork cheese and smoke beef. Set lunches here are a steal too, with $10 bagging you a soup, drink, and a half pork knuckle for your crackle cravings.

Who needs posh when you’ve got good German nosh like pork knuckles and currywurst? The former comes tender on the inside, crispy on the outside – proof that pub grub doesn’t always mean cheap fried frozen food. Of course, like any self-respecting Germanic pub – located within the rowdy heart of Holland Village, no less – Baden offers a variety of classic German brews like Erdinger Weissbier.