From taxis to bus and trams, grab an Octopus card and get around Hong Kong by public transport with our ultimate guide!

Whether you want to plan a day trip to Tai O fishing village, or explore the coolest restaurants and local bars, make sure you know the cheapest and easiest way to use public transport in Hong Kong. From buses and trains to taxis, ferries, minibuses and even trams, Hong Kong is one of the best connected places in the world. Just grab an Octopus and get moving. 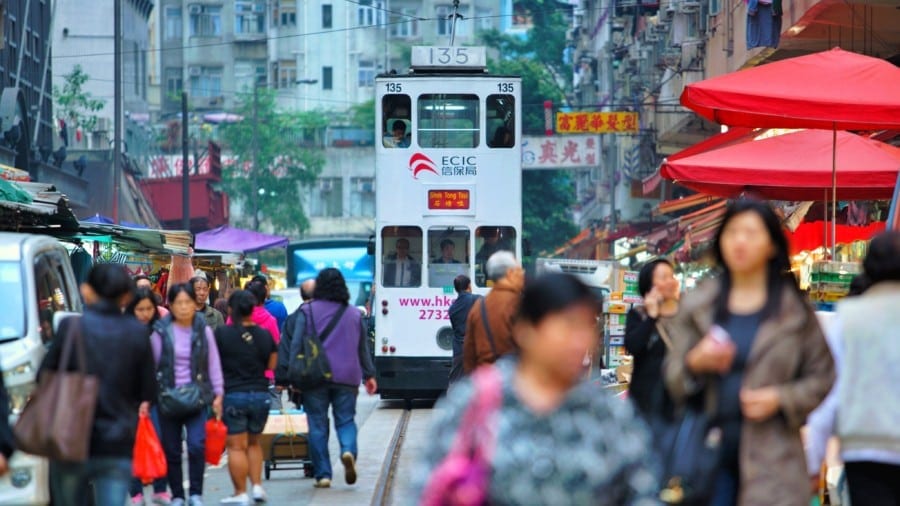 With mesmerising panoramic views from both sides of Victoria Harbour, get ready to have a great time chilling on deck! Ferries are both quick and convenient, making them our favourite public transport in Hong Kong.

One of the quickest ways to go back and forth between Hong Kong Island (Central Ferry Pier 7) and Kowloon (Tsim Sha Tsui Ferry Pier) is by taking the Star Ferry. The ferry comes in every 6-10 minutes, and runs from 6.30am to 11.30pm. There are also ferries operating from Central Ferry Pier to other main outlying islands, such as Cheung Chau and Lamma Island.

Check out the timetables for all types of ferry services.

Fares and tickets
You can, again, use the almighty Octopus card, or purchase a ticket over the Harbour Tour Ticket Counter outside the piers. It costs around $2.20-$2.70 ($3.10-$3.70) depending on whether you opt for the lower deck or upper deck which has air-conditioning.

We enjoy taking in the view of the streets – flashing neon lights and colourful panels are a plus! – from the top of a double-decker bus. This is clean and efficient public transport in Hong Kong at its best.

There are five major bus companies in Hong Kong, with KMB in Kowloon and the New Territories, Citybus and NWFB in the area of Hong Kong Island, Long Win Bus in Tong Chung area, and lastly New Lantau Bus on Lantau Island.

The earliest time of arrival for most buses is 6.00-7.00am, and they usually stop at around midnight. But don’t sweat it, there are also overnight buses – the “N” Routes. Their routes usually start and terminate at an MTR station, so you should perhaps plan ahead and combine two bus routes together to arrive at your destination.

Download the app Citymapper to figure out the quickest bus route to wherever you are going!

Fares and tickets
As mentioned, an Octopus card is obviously the easy option. For buses, just tap on and there’s no need to tap off.  If you prefer doing it the old-fashion way, keep some change in your pockets, as the bus driver will need you to pay the exact change in coins.

The tram system is one of the most iconic (and most beloved) forms of public transport in Hong Kong. Feel the wind gently blowing on your face as you inhale the enchanting street views of the Western District from the upper deck. It’s all so nostalgic!

Trams run only on Hong Kong Island, from Kennedy Town to Shau Kei Wan, meaning you can hop on and off in places like Central, Wan Chai, Happy Valley, and Causeway Bay. The earliest tram departs at 5.30-6.00 am and runs until midnight.

Check out the map of HK Tramway.

Fares and tickets
Regardless of how far you travel, each trip will only cost you $2.30! Pay the exact fare by using an Octopus card or cash when alighting.

When it comes to speedy public transport in Hong Kong, the MTR wins by a mile. Consisting of 10 rail lines that cover the developed areas of Hong Kong Island, Kowloon, and the New Territories, the MTR (Mass Transit Railway) is the biggest transportation network in Hong Kong. The three major MTR lines are the Kwun Tong line (green), the Tsuen Wan line (red), and the Island line (dark blue). The longest line is the Tuen Ma line linking Tuen Mun all the way to Wu Kai Sha through 27 stations. Most of the MTR stations have wheelchair-friendly entries and platforms, as well as tactile guide paths for visually impaired passengers.

Depending on the station, the first train departs around 5.50-6.00am and the last train leaves around midnight to 1.00am. Trains run every 2-4 minutes during peak and every 4 -6 minutes off peak, but during the early morning and late night hours, the train service will be reduced to every 12 minutes – still not bad.

Fares and tickets
Now get an Octopus card! You can use it on all types of public transit vehicles (except for taxis and red mini-buses), and also in most convenience stores and fast food restaurants. Get the smart card at any MTR Customer Service Centre, and top it up at the Octopus Add Value Machines or 7-Eleven stores with cash (minimum HKD$50). Don’t forget to refund the residual amount with a HK$9 handling fee for an on-loan Octopus card at the end of your visit!

You can also get a single journey ticket from the Ticket Issuing Machines at every MTR station. Rail fares are calculated based on the total distance travelled, so if you’re feeling fancy, get an Adult Tourist Day Pass for $65 that allows unlimited travel for a whole day. Though we would highly recommend going for the Octopus card if you’re here for longer, as it is way more practical.

If you favour a form of less crowded public transport in Hong Kong, try the 16-seat green and red minibuses that navigate through the narrow streets and alleys of the bustling city.

The former has a scheduled service while the latter has no specific bus route, so only frequent commuters would know where they could alight. Unless you speak fluent Cantonese, or if you’re with an experienced mini-bus taker, we advise you not to take the red minibus unless you are up for an adventure.

Check out the minibus route directory.

Fares and tickets
With the green ones, you either pay in exact change or by Octopus card when getting onto the bus. However, you can only pay by cash with the red minibuses. And do it before you’re about to get off the mini-bus.

Cabs in North America, European countries, or even Japan, are always considered unbelievably expensive compared to other modes of transportation — not the case in Hong Kong! It is very affordable here and fairly easy to spot one on the streets.

There are three types of taxis in Hong Kong: Red taxis (aka Urban taxis) that are responsible for most of Hong Kong, blue taxis that only operate on Lantau Island, and green taxis that only service the New Territories. If you are going from Hong Kong Island to Kowloon or the New Territories, you will need to flag down a Kowloon taxi, which you can recognise by the Out Of Service sign in the window.

Know more about the Urban Taxi Call Centre here if you want to book a taxi in advance.

Fares and tickets
The flag down rate of red taxis for the first 2km is $24, it goes up by $1.70 every 200m or every minute of waiting time. Note that you need to pay in cash, as no Octopus card or credit cards are allowed.