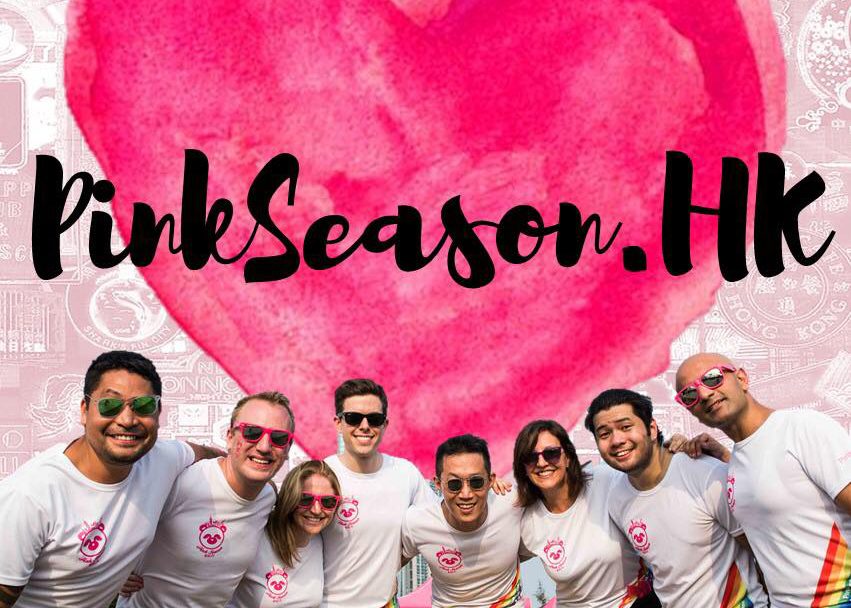 Philip Howell-Williams, second from left, with the Pink Season team.

At Honeycombers, we celebrate diversity with our favourite LGBTQ movies and queer artists and opinion pieces on topics like coming out in Hong Kong. And we reckon it’s important to support gay rights by attending local events to help raise awareness. Pink Alliance – one of the most well-known charitable institutions in Hong Kong – was set up about twelve years ago as a communication group and channel between different LGBT groups that do advocacy work and run events, and the local LGBT festival Pink Season came out of it.

Having been nominated three times for the Hong Kong LGBT+ Inclusion Awards, Pink Season finally won the LGBT+ Community Impact Award in 2018. Returning for its 9th event later this year, we chatted with director of Pink Season Philip Howell-Williams regarding equality in Hong Kong and what awaits us at this year’s Pink Season.

What is Pink Season?

Pink Season is a registered charity and a five-week long festival which supports and helps the LGBT community, and we have all sorts of event, such as sports, theatre, art, educational seminars, kids events. It runs from the end of September to November.

This year we’re trying to create new events and streamline it. One of them is Career Day, in which we’ll be working with the Queer Straight Alliance, the university group, to talk about basic life skills in the workplace. There will be representatives from different sectors as well, so graduates can talk to them. We’ve got quite a number of companies involved, such as The British Council and LinkedIn, so we think an event like that is going to be positive.

And we always do events about health. We work with charities like AIDS Concern, and this year it’s going to have a very strong focus upon mental health and suicidal awareness. There will also be fun events like a Sports Day and a Variety Night with drag queen workshops.

What are the challenges you guys face with Pink Season?

Apart from sexuality, do you guys make sure other systemic issues and factors like race and class are taken into consideration?

It’s a general problem when you look at equality, diversity and inclusion as a whole. There are people which are always going to be not as recognised as others, sadly. What we’re trying to do at Pink Season is to overcome that, and we’re really focusing upon minority groups within the LGBT community this year at Pink Season. So we’re working with migrant worker groups and charities, to try to help and support the LGBT domestic helpers here. Even within the queer community, transgenders are often discriminated against the most. What’s the situation here in Hong Kong?

There is a transgender resource centre in Mong Kok and various different groups which do specific work, like the Equal Opportunities Commission. Regarding transgender rights, there was a case here a few years ago. The court case said that the transgender lady should be recognised in her new gender. However, for somebody to be recognised in their gender, they have to have reassignment surgery according to the government, which is basically telling someone that they’re not recognised. You can’t force people to have quite incredible invasive and dangerous surgery. Again, the fight goes on. But they’re definitely included and the rights are being formed for them.

How can the public help in regards to raising awareness of equality?

Participate in the events. There is Pride March in November, Pink Dot in October. Just taking part in these events with family and friends is good for bringing awareness. It helps break down some of the preconception about what the community is.

Do you think that Hong Kong is heading in a more positive direction?

With Hong Kong, it’s always one step forward, one step back. Things are changing, there was a recent survey released from the Hong Kong University showing that over the last five years, the general public’s opinion on whether same sex marriage should be allowed in Hong Kong has gone up from 38 per cent to 52 per cent. As the younger generation gets old, there will be a more liberal view. It will naturally progress but it takes time.

Opinions do change slowly over time. Look back in the UK the way television has progressed. When I came out, Queer as Folk came on television and it was the most complained about television programme in the whole history of television in the UK. It was seen as completely over the top and disgusting to many people. And it’s fairly common place to have gay characters, gay presenters and contestants on television. Even though it’s not at that stage yet in Hong Kong, we’re talking about twenty years and things have progressed.