We interview Blood Wine or Honey about their album: Fear & Celebration.

The Hong Kong band scene is getting more diverse, with genres from shoegaze (bands like Thud) to pop (groups like li’l ashes) being solidly covered at regular gigs across town at live music venues. Consisting of multi-instrumentalists James Banbury, Shane Aspegren and Joseph von Hess, Blood Wine or Honey is a mischievous trio that knows how to dazzle its listeners with unexpected chaos and endless grooves. Having released their debut EP Anxious Party People in 2017 – that is a little bit eerie, yes; and very much playful, yes – we chatted with these whimsical music makers about their latest album Fear & Celebration, their silly daydreams, as well as being obsessive perfectionists.

Interview with Blood Wine or Honey

Hi, guys. Thanks for sitting down with us. Can you give us an understanding what Fear & Celebration is about?

James: It’s kind of like a move-on from Anxious Party People. I have this thing where I’m excited to go out but also slightly nervous about what might happen, whether I’ll enjoy myself, as well as the pressure of social interaction.

Shane: These words came out in a stream of consciousness while we were writing the lyrics together, and going back and forth between various ideas.

Joseph: I imagine a party at the end of the universe, and that’s what they say, enjoy yourself it’s later than you think. Sometimes we say things and the meanings follow. So hopefully, it’s open to interpretation. 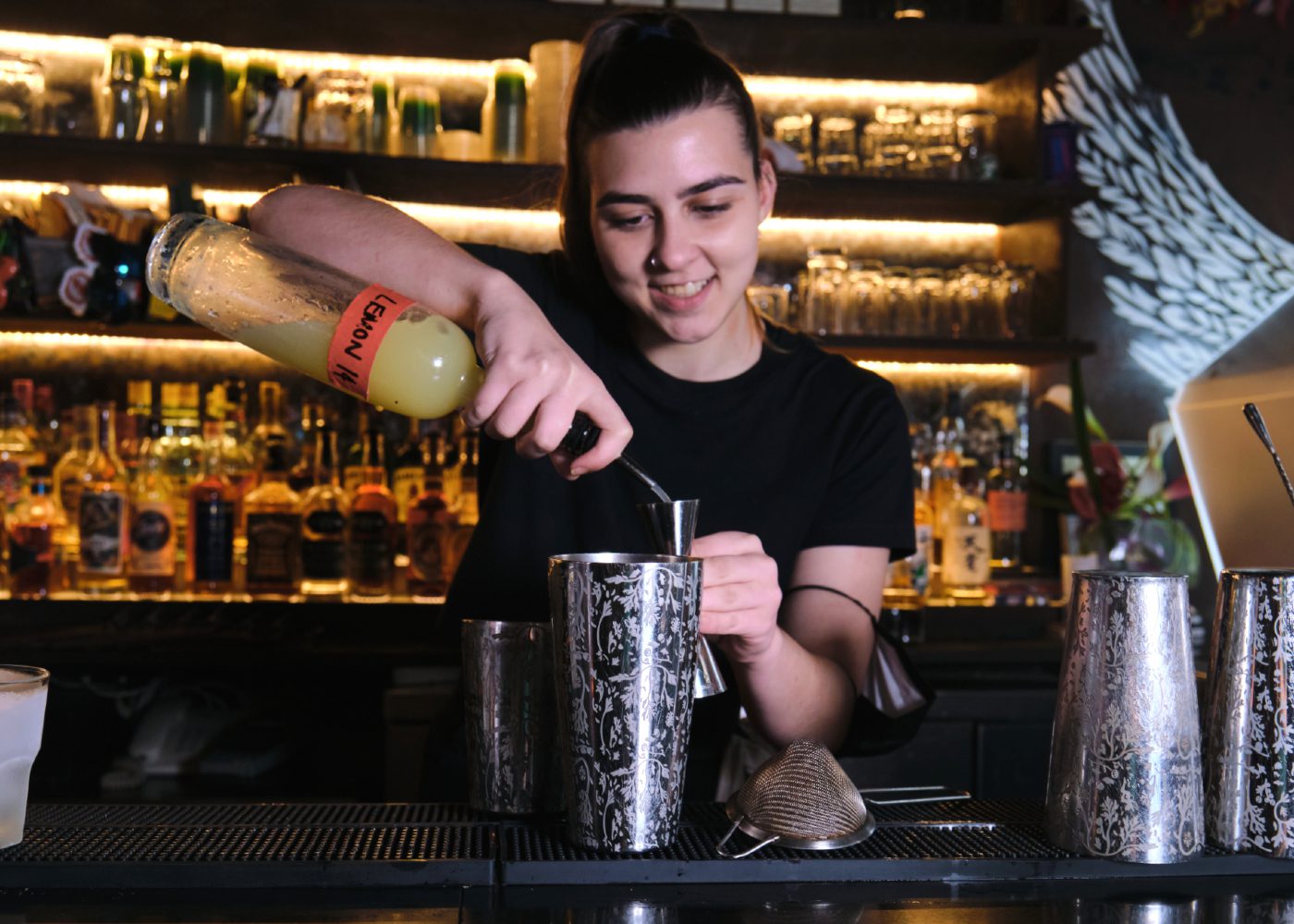 These bars have us coming back on the regular

People use an array of labels to describe Blood Wine or Honey, electronic, jazz, funk, psychedelic rock… What is taken into consideration when you make a new piece of music, or is the creative process more in the moment?

S: We weren’t aiming at anything. I guess what happened is what happened at the end of the process of making it. Our influences are diverse, even as individuals, so I guess that all just get spread in.

Joseph: It kind of feels like a backward thing. The concept for a thing – poetic ideas or silly ideas – was there for a long time without us necessarily thinking about genres, and the music just comes out of that rather than us going for it.

Do you think you have achieved that state where you can express yourself more freely via music?

Joseph: Oh, NO! (Shane laughs). It’s always something I’m striving for, but not necessarily reaching. I think being a musician is where you’re always looking beyond where you are. That’s the joy but it’s also painful. I think we’re looking to do something, and whether or not we’ve achieved that isn’t really up to us to decide.

S: I also think any great art, no matter what it is, always turns into something beyond or different than you originally set out to be.

James: For visual art or music, it changes as soon as someone looks at it, and people develop their own perspective. So I feel like experience and expression shift.

Which track on the album took you the longest to make?

S: I feel like may be The Undying Overrated. It’s actually the most pop of all that we’ve made. What was hard about finishing it was that we had a hard time deciding when it was done.

Joseph: All of them took too long! But those two are definitely up there. There are other tracks that we did and we finished and then we decided they weren’t, so we went through a whole thing to re-record this part and that.

S: We’re all control freaks and obsessive perfectionists in a way.

What’s the sentiment behind the song The Forest Is Expecting You?

Joseph: That’s about the animals, isn’t it?

S: We named our label Plastic Pagan, we always have this idea, kind of ritually… A little bit tongue in cheek, but also—

Joseph: Sort of like consumerist paganism or something (laughs). It’s possibly an idea around one’s relationship to animals or others, and alienation.

James: There are a lot of nice words in that song, the building of those things is about wordplay.

S: It may have started with one phrase, and somebody else added something to it. So the sentiment isn’t necessarily one thing, it’s very much about everything. In a way, some of the time, we’re singing from the point of the other.

What are you guys passionate about outside of music?

S: Well, we have children (laughs).

James: Yeah, our families! And food, food is good. We eat three times a day. And I like architecture.

Joseph: Bad poetry. Things that are terrible. I care a little bit about a lot of things. In one way or another, we are all pretty focus on music and that does take up a lot of headspace and effort.

S: People ask musicians what they do in their spare time, and you go like, WHAT? It’s a way of life – haha.

A beginner’s guide to beating the HK heat

Tinted might just be our new fave nail bar