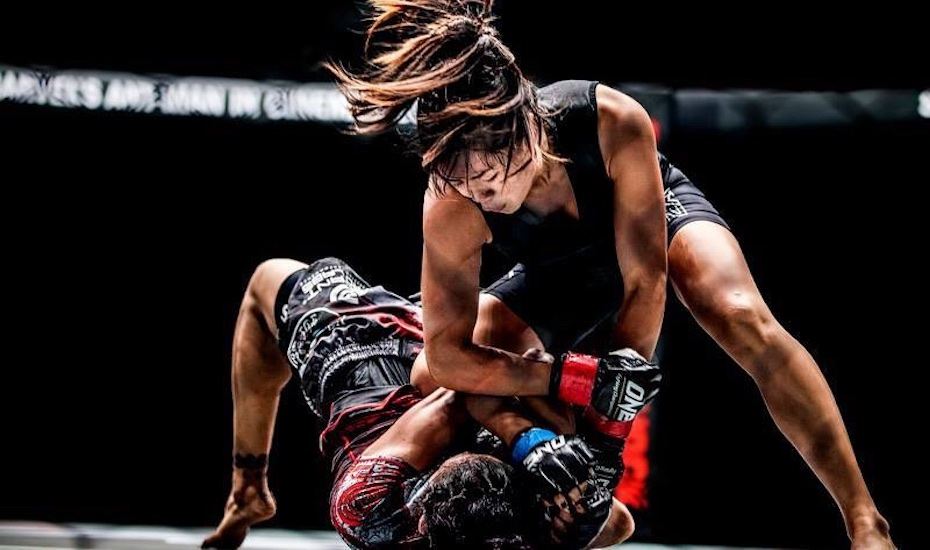 Learn self-defence and work on your physical fitness and discipline at these martial arts classes around the city...

Want to be a martial arts badass like Angela Lee? Not only will you take your fitness to a new level, but you’ll also get a chance to learn a valuable and rewarding life skill – one that might get you out of a sticky situation (just don’t go starting one!). Here’s a list of some of the best martial arts schools in Singapore, where you’ll learn everything from the immensely popular Muay Thai and Mixed Martial Arts (MMA), to more esoteric disciplines like Ninjutsu and Kali.

Mixed martial arts is a full-contact combat sport that utilises a mix of striking and grappling techniques from various other martial disciplines. The international MMA competition, Ultimate Fighting Championship, brought the sport into the spotlight, making it one of the most popular martial arts disciplines in Singapore. At Evolve MMA, its course is led by world-class professional fighters, Chatri Sityodtong and Heath Sims. The two have proven their abilities as instructors, training world champions like Dan Henderson, Rampage Jackson and Shinya Aoki. The school also offers trial classes, so you get a taste of what the training offers.
Evolve MMA, various locations

Size matters not as far as this grappling-focused martial art goes. Brazilian Jiu-Jitsu (BJJ) operates on the idea that a larger and stronger opponent can be controlled and incapacitated through leverage, body mechanics and techniques, rather than brute force. If you’re of slight build and want to work on your confidence, BJJ Singapore will equip you with a firm grasp of the basics. Still a bit intimidated? Take advantage of their free trial class. The academy, the first of its kind in Singapore, boasts a massive 96-square metre matted and air-conditioned training facility as well.
Brazilian Jiu-Jitsu Singapore, Peace Centre, 1 Sophia Road, #06-19A, Singapore 228149. p. 9457 9426.

If you’ve watched Chinese New Year re-runs of Karate Kid more times than you can count, maybe you should consider learning this legendary martial art for real. The Shitoryu Karate Association was started in the ’60s by a group of Singaporean police officers who recognised the importance of Karate as a practical self-defence system. Now go do Mr. Miyagi proud.
Shitoryu Karate Association, Level 2, Civil Service Club, 60 Tessensohn Road, Singapore 217664 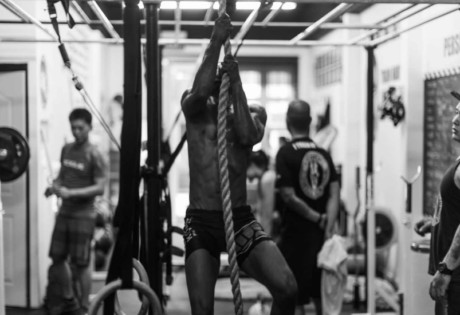 Best gyms in Singapore for that bangin' bod

At Trifecta Martial Arts, firm fundamentals, technical mastery and fitness are virtues that the school places emphasis on. Embracing this trinity in training, the school believes that a solid foundation allows practitioners to get the most out of every training session and enjoy the sport for years to come. This trainee-oriented philosophy makes Trifecta a great place to start out if you plan to keep at Muay Thai for a long time. Bonus: The school offers classes for families and kids too if you’re making this a fam activity!
Trifecta Martial Arts, #01-05, Central Square, 20 Havelock Road, Singapore 059 765; 100 Turf Club Road, Horse City, Singapore 287 992

Learn to be like water at this school’s authentic Shao Lin Kung Fu (and Wing Chun) classes. Instructor and lifelong Kung Fu practitioner, Leroy Kwok, trains students using clear and modern methods while retaining the traditions of Chinese Kung Fu. He also aims to instill good sportsmanship and a sense of discipline both on and off the mat.
Singapore Kung Fu Martial Arts School, 40B Sago Street, Singapore 059029

Learn the art of the fabled shadow warrior at this cloistered gym tucked away in Telok Blangah. Before you pick up a katana and clad yourself in black, it’s worth mentioning that Ninjutsu is nothing like it is in the movies. The classes here don’t just focus on usage of weapons, but also focus on the mental aspect of the discipline, like awareness and unpredictability in movement. The founder, Sensei Nachum Kaplan, trains Ninjutsu as a part of Bujinkan Budo Taijutsu, one of the few disciplines of Ninjutsu that have not been adapted into a competitive sport.
Singapore Ninjutsu, 370 Telok Blangah Road, Singapore 098835. p. 8138 9269.

Practitioners of Krav Maga loathe having their self-defence system referred to as a martial art. Watch any Krav Maga sparring session and you’ll realise that there’s no art involved, just sheer efficiency and violence of action. It’s no wonder it’s one of the most popular self-defence systems taught in the military. Walk by their studio in Upper Serangoon Shopping Centre, and you’ll find padded-up students sparring in various real-life scenarios. Practitioners of this system will learn how to defend themselves from multiple armed opponents as well as how to disarm an attacker.
Krav Maga Global Singapore, Upper Serangoon Shopping Centre, 756 Upper Serangoon Road, #02-02, Singapore 534626.

If you’ve watched The Bourne Identity, you’ll definitely remember the beautifully choreographed fight scene where the eponymous amnesiac spy fends off an assassin using nothing but a pen. The fight scene draws heavily on the Filipino martial art of Kali, one of many disciplines taught at Kali Majapahit Singapore. Founded by Fred Evrard, the school teaches this efficient martial art to adults and children of all skill levels. The classes aim to be holistic, and focus on three aspects: self-defence/martial arts culture, health, and personal development.
Kali Majapahit, 43 Carpenter Street, Singapore 059922. p. 6534 5254.

Judo, meaning “gentle way”, may lack some of the flashy movements and the ‘cool’ factor of other martial arts, but makes up for that with sheer practicality. The form focuses on joint lock and chokes but tend not to involve strikes and thrusts, allowing a smaller practitioner to force a larger, stronger one into submission. The Singapore Judo club is Singapore’s oldest and is a volunteer-run non-profit organisation. The club regularly brings in Judo experts from all over the world to train and instruct students.
Singapore Judo Club, 1 Guillemard Crescent, Singapore 399913

Here’s one if you literally wanna get a kick outta martial arts! Founded in 1974 by Grandmaster Jae Hun Kim in Boston, the Singaporean branch of the school offers the same intuitive method of instruction and levels of professionalism; its instructors consisting of many national champions and professional athletes. With over eight schools in Singapore, the school makes it convenient for even working professionals to pick up this elegant martial art.
Jae Hun Kim Taekwondo, Singapore. For a full list of locations, click here.

Combining fight, dance and game, the 300 year old tradition of capoeira originated from Brazil, where slaves once used the art form to combat their colonial masters. At its heart, capoeira forces people to push their boundaries in an elegant display of mental and physical prowess. Two styles of classes are offered at Saudação Capoeira: regional and Angola. The former is best for beginners as it teaches you the basics and nuances, while the latter lets you dive right into the intensity of the sport. Not sure if this is for you? The first trial is free.
Saudação Capoeira, 44C North Canal Road, Singapore 059300

Founded in the early 20th century, aikido combines throwing, joint-locking and pinning techniques with traditional Japanese weapons like the sword and staff. Unlike other martial arts, aikido isn’t about defeating your rival; instead, it champions understanding of basic techniques and working with a partner in an attack that works with the energy of your opponent. If you’re looking for quality training, this place is it as it’s headed by Shihan Phillip, who has four decades of experience under his belt, with a team of legitimate instructors backing him.
Akikdio Shinju-kai, Multiple locations including HomeTeamNS – JOM Clubhouse (Balestier), SAFRA Toa Payoh and Toa Payoh East Community Club.

You won’t typically think of wrestling when it comes to martial arts but this style of grappling very much so falls under the umbrella term for different types of combat. American catch wrestling is unapologetically aggressive and full contact. Kapap Academy is the only certified self-defence school in Singapore to offer Tony Cecchines’s (one of the world’s best ‘hookers’ and catch wrestling legend) style of catch wrestling.
Kapap Academy, locations in Robinson Square and 23 Geylang Road.

Here’s one if you literally wanna get a kick outta martial arts! Founded in 1974 by Grandmaster Jae Hun Kim in Boston, the Singaporean branch of the school offers the same intuitive method of instruction and levels of professionalism; its instructors consisting of many national champions and professional athletes. With over eight schools in Singapore, the school makes it convenient for even working professionals to pick up this elegant martial art.
Jae Hun Kim Taekwondo, various locations

Forget your treadmill workouts, and pick up kickboxing for a real sweat sesh.While similar to boxing with its jabs, hooks and uppercuts, it’s the ‘kick’ in ‘kickboxing’ that decides the winner of the match. The benefits are plenty, including weight loss, better coordination and flexibility, and of course, learning self-defence. This is one heck of a workout, so gather your gal pals and get ready to smash the class.
Ground Zero, 38 Carpenter Street, Level 3, Singapore 059917

You’ve probably seen some of your Malay friends attending a silat class in Primary school but ever wondered what it’s all about? Originating from Java and widely practiced in Malaysia and Indonesia, Silat is a form of martial arts that covers armed combat like fixed hand positions, low stances, and slow dance-like movements – a unique form of fighting but probably one of the deadliest. Try the fight fit programme for mixed age groups at the Sports Silat Academy and learn some martial arts moves in a fun-filled environment.
Sports Silat Academy, Kaki Bukit Recreation Centre, 7 Kaki Bukit Ave 3, Singapore 415814

Every Chinese martial art enthusiast would agree that tai chi is one of the integral parts of martial arts, helping the balance in combat and following the philosophy of ying and yang. Apart from improving an overall balance, you refine the range of motion around your joints preventing chronic diseases like arthritis and osteoporosis. New Age Tai Chi holds various classes including private sessions.
New Age Tai Chi, Blk 1 #02-07, ITE College West, 1 Choa Chu Kang Grove Singapore 688236

For Kalaripayattu: The Kalari Academy

Dating back to the 3rd century BCE and originating from Kerala, kalaripayattu (or kalari) is the oldest martial arts that’s still in existence, and you can try a class right here in our city. This Indian martial arts sport utilises both armed and unarmed combat with quick movements comprising of several versions of strikes, locks, kicks and grappling. Classes are held on Wednesdays and Saturdays
The Kalari Academy, 5 Stadium Drive, Singapore 397631

Like this story? Check these out:
Where to learn muay thai
Get in your best shape at these gyms
Get long and lean at these pilates studios
Into HIIT workouts? Here are the gyms to get your fix