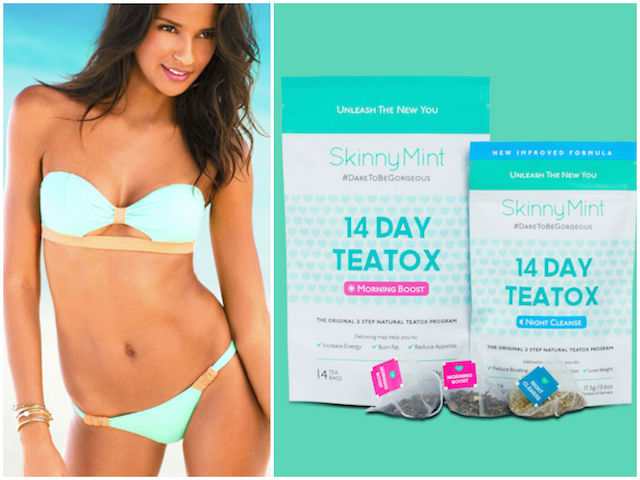 Food – so glorious, but such a necessary evil (sometimes). With new, exciting restaurants popping up all over town, coupled with stress-eating and buffet-indulging, surely you can’t blame us for less than fit and fab (read: fat) on most days. That’s why we were intrigued by the slim promise of SkinnyMint when it came around and decided to give it a try.

The long and short of it

Conceptualised by Kasia Vermaire, the first female tea sommelier in the Netherlands, SkinnyMint helps to cleanse and detoxify through their Teatox programme. Not only are all ingredients used 100% natural and organic, their products are rigorously tested through countless tasting sessions before being launched.

Sip two different blends, the Morning Boost and the Night Cleanse, during your teatox (either a 14-day or 28-day programme). Each tea has been specially formulated with plants renowned for their health benefits, which works in tandem to help you drop the pounds by burning more calories and fat, reduce bloatedness, and boost metabolism rate – totally music to our ears. Taken daily, the Morning Boost reportedly curbs appetite while the Night Cleanse (to drink every other day) is a mild, natural laxative that lowers cholesterol.

The best part: you can still eat three square meals a day – in fact, the folks at SkinnyMint recommend keeping a well-balanced diet while you’re on the programme. Naturally, you should abstain from coffee, alcohol, greasy foods, and other sugary-laden food during your Teatox. Isabel, one of our resident lifestyle writers, stepped up to the plate and embarked on the 14-day Teatox. She spills the beans on her experience:

“Having tried out and survived a juice cleanse a few months back, I was more than ready to test the effectiveness of SkinnyMint’s Teatox. My biggest challenge: I have an unrelenting sweet tooth and a weakness for iced lattes. But hey, it’s just tea right?

Hits: Surprisingly, the teas tasted fine. The Morning Boost had a light floral flavour, and I liked that I could have it at any time of the day as long as it was before 5pm. The Night Cleanse was a tad stronger with hints of lemongrass and ginger (not my favourite), but it had a calming effect on me, which made it perfect for before bed, really. My appetite was definitely reduced, and I stopped craving chocolates and sweets as much as before. Amazing what a little teabag a day can do!

Misses: The Morning Boost was supposed to kickstart my day with a good dose of caffeine and vitamins, but I (still) found it hard to keep my brain juices a-flowing at work. The laxative effect in the Night Cleanse was also a lot more potent than I had expected, but the weighing scale did show that I was a wee bit lighter after numerous trips to the restrooms. That certainly helped motivate me to make bigger changes in my diet and exercise habits. I might even try the 28-day Teatox (watch this space for the review)!”

Isabel is a culture vulture, always delving into Singapore's 'hoods and hangouts to uncover the best of what's happening around town. When not at the keyboard, she's rushing off to plays, exhibitions, yoga, and French class.