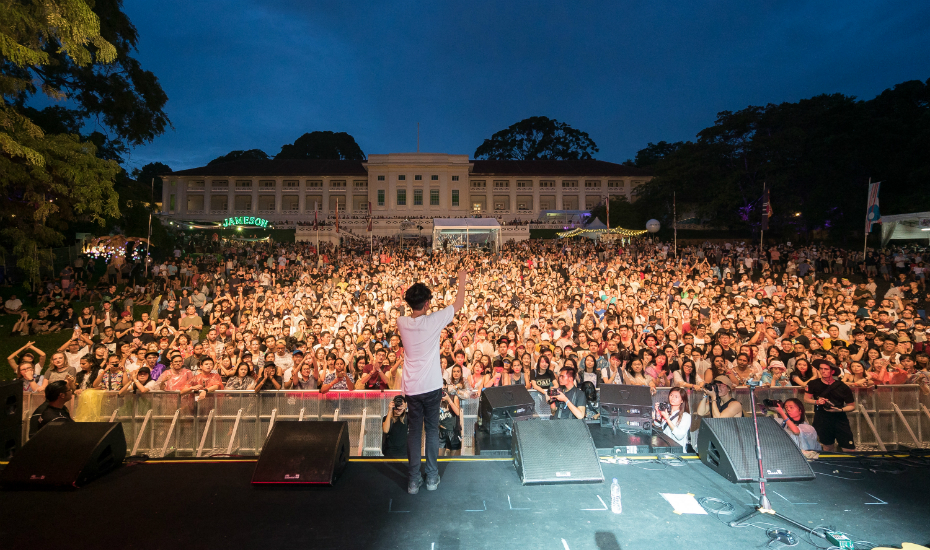 Featuring indie musicians, DJs, arts installations, comedy and poetry acts, and street food galore, Neon Lights nails it yet again as one of the best festivals in Singapore

Let me start with one thing: music festivals are not meant to be a clean affair. You’re normally meandering through bug-rampant grass, getting beer spilt on you (it always happens), squashed amongst thousands of other punters in the mosh pit who are just as restless and sweaty as you, and baking like a burrito under the sun. Pin the blame on me if you like, but I admittedly kept my fingers crossed that this sophomore edition of the Neon Lights festival wouldn’t be a scorching affair, and that I’d be able to keep my tomato-hued sunburns at bay. Little did I know that I was about to get more than I bargained for, as the 15,000-strong crowd not only had to endure relentless showers, but also an unforgiving terrain of slimy, shoe-ruining mud that had everyone sliding and slipping like butter on an ice rink.

Festivals are not meant to be a clean affair – but once you can accept that, nothing will get you down. And rest assured, Neon Lights 2016 had plenty of ups.

Taking over Fort Canning park once more with 150 artists and 25 music acts, the Neon Lights festival witnessed two days of indie anthems, sense-bending art showcases, side-splitting comedy, gripping spoken word, gourmet grub, and even kid-friendly activities that continued to grant the extravaganza universal appeal. Neon Lights’ second showing proved to be bigger and better – and amusingly boggier – and here are a bunch of reasons why I think Neon Lights scored a win.

Serenading the masses with campfire-apropos folk numbers were the guitar-savvy likes of José González and The Tallest Man On Earth – both Swedish singer-songwriters who had everyone hooked to their sung stories and tender, dexterous fretwork. The latter even went into his recent divorce, and how he was doing okay by “figuring it out” through his music. Cue the “Awws”, he did.

What was possibly my personal highlight of the whole festival, the Canadian electronic outfit of Crystal Castles gave a tremendous performance kudos to the synth sorcery of Ethan Kath and the charismatically unhinged antics of new frontwoman, Edith Frances. Fans were concerned if Frances could match the gnarly showmanship of Alice Glass, the band’s previous frontwoman who notoriously performed in Singapore in 2010 with crutches and a broken leg. But as Frances gambolled across the stage to hits like “Intimate” and “Baptism” while twirling mic stands, lugging strobe lights and dousing herself in water, CC fans were convinced that this castle was far from crumbling.

Retro-glossed synth-pop and r&b have made a glorious comeback in the indie circuit, and these were unveiled by two of Neon Lights’ top performers. The multi-talented Dev Hynes, AKA Blood Orange, portrayed a Billie Jean-era Michael Jackson with his velvety-smooth moves and grooves; while Shura presented an impeccably polished set that, in my opinion, could’ve toned down on the over-processed vocal effects.

Foals are still on fire

Neon Lights marked the third time these British icons took the Singapore stage, and they delivered a set that spanned their decade-long growth from math-rock mavericks to anthemic alt-rock titans. “Cassius” and “Spanish Sahara” were classics that could do no wrong, while numbers like “Mountain At My Gates” and “What Went Down” proved that their new, more aggressive material packed just as much punch. But without a doubt, it was their high-octane closer “Two Steps, Twice” that had everyone floored.

We want the funk

Two legendary groups graced Neon Lights this year – The Sugarhill Gang to every rapper’s delight, and George Clinton’s & The Parliament Funkadelic, featuring the main man himself at 75 years of age. The latter collective’s rare appearance was a bona fide romp, with over 10 musicians on stage, contorting cowboy dancers, and gargantuan funk breakdowns that had everyone boogie-ing in the mud with abandon.

So much happened in the span of two days, it’d be imprudent not to give them a shout-out. Many fancied the return of Chairlift, that beefed up their electronica-savvy sound with unorthodox uses of saxophone; 2manydjs turned the fields into a rave buzzing with the nostalgia of electroclash; 65daysofstatic gave a monolithic masterclass in post-rock; while Neon Indian put on an earnest showcase that exhibited hints of funk, chill-wave, and reggae, despite being unfortunately marred by technical difficulties that cut his set short – one major bummer that plagued Neon Lights this year.

The grandeur of Sigur Rós

Despite the ringing ears, mud-crusted limbs and collective exhaustion, the Icelandic post-rock trio behind Sigur Rós undoubtedly drew the biggest turnout of Neon Lights as the festival’s closing set. With explosive visuals on-screen and on-stage – watching Jónsi making his guitar wail with a violin bow never gets old – these atmospheric sound-sculptors were soft-spoken in dialogue while deafening in musicianship. Enchanting numbers like “Glósóli” and “Festival” were powerful enough to make grown-ups cry, even if no one could speak a word of “Hopelandic” – the band’s own fictional language. Magical? You betcha.

I’m certain it’s gonna be a while before I wipe all the dried mud off my shoes, but it’s gonna take me longer to recover from the withdrawal symptoms of such a festival. Quality music, a gorgeous albeit swampy setting, and enough fringe events to keep everyone chuffed regardless if they were a festival pundit or greenhorn – Neon Lights is one light in the local festival circuit that I hope never goes out.