Apart from being a whiz at urban landscaping, conserving greenery in a land-starved space, and productivity in general, the Lion City has worked hard to preserve our multicultural heritage, from cultural norms and practices to ethnic cuisines.Whether you’re a first-timer in Singapore, or simply curious to find out a little bit more about the various ethnicities, here’s our (very comprehensive) guide to Chinese, Malay, Indian, Eurasian and Peranakan cultures:

The largest ethnic group in Singapore, Chinese immigrants (who were mainly from Fujian province in China) first flocked to Singapore in search of work. The Chinese here belong to different cultural groups, like Hokkien, Teochew, Cantonese, and Hakka, and each have differing dialects and practices.

Visit Singapore in January or February to get the most out of the festive Chinese New Year period. The much-feted Chingay Parade, a yearly procession of colourful floats alongside wushu masters and stilt walkers, will be held in Orchard Road during this time. Head to the Esplanade for the annual Huayi Festival, where you can catch dying trades like an elaborate Chinese opera performance.

The bustling streets of Chinatown will keep you occupied for hours as you shop for trinkets and snack on street food. Learn more about the early Chinese immigrants at the Chinatown Heritage Centre (48 Pagoda Street). Or make your way to the Buddha Tooth Relic Temple (288 South Bridge Road) and Thian Hock Theng Temple (158 Telok Ayer Street) to find out more about Buddhist and Taoist practices. The upcoming Singapore Chinese Cultural Centre, slated to open in 2015, will showcase Singapore’s unique “nanyang” style of Chinese culture through cultural performances, art shows, talks, and more. Dim sum is one of the most popular Cantonese imports here, and it makes for a popular supper option too. For authentic and traditional Chinese fare – think double-boiled soups and Peking duck – check out some of our personal favourites, like Yan Ting restaurant and Beng Hiang restaurant.

Malays are the second largest ethnic group here, and many had ancestors who were immigrants from Indonesia and Malaysia. The Orang Laut (sea nomads), who lived on boats and fished for a living, also once called Singapore home. Your first stop: the Malay Heritage Centre (85 Sultan Gate), where you can catch a wayang kulit (Malay for shadow puppet) performance and listen to traditional music. Within walking distance is Sultan Mosque (3 Muscat Street), a majestic golden-domed structure that was built for Sultan Hussain Shah, the first sultan of Singapore, in 1824. Today, Singapore’s largest mosque is a national monument that has welcomed thousands of devotees and curious tourists on tour.

Nasi lemak (coconut rice in Malay) is a hot favourite amongst locals, and we’ve scouted the island for some of the best places to try it. Sabar Menanti restaurant (48 Kandahar Street) specialises in Minangkabau cuisine, which mainly consists of rice, fish, coconut, green leafy veggies, and chilli. Hajah Maimunah restaurant (15 Jalan Pisang) serves up steaming platefuls of nasi padang (rice with assorted dishes) and a wicked sambal belachan (made of chilli and shrimp paste). For those with bigger appetites, feast on a tantalising array of dishes at 1Market, a halal buffet resto by Celebrity Chef Wan. Haji Lane and Arab Street, located within the Kampong Glam district, are your best bets for quirky vintage finds and yummy eats. The lanes might be narrow and crowded, but trust us: the shopping here will be amazing.

The Geylang Serai neighbourhood is one of the oldest Malay settlements in Singapore. For a glimpse of how locals get their hands on fresh produce, a trip to Pasar Geylang Serai – aka the wet market – is in order. Don’t forget to explore the Malay baju kurung (traditional Malay costume) shops and jamu (traditional Malay medicine) stores in Joo Chiat Complex (1 Joo Chiat Road). Swing by Kiah’s Gallery (71, Unit B Sultan Gate) for one-of-a-kind batik creations.

Indians in Singapore form about 9% of the country’s population. The Indian community here began as a transient one, and many only planted their roots here when Singapore was under colonial rule. Tamils and Hindus form the majority. 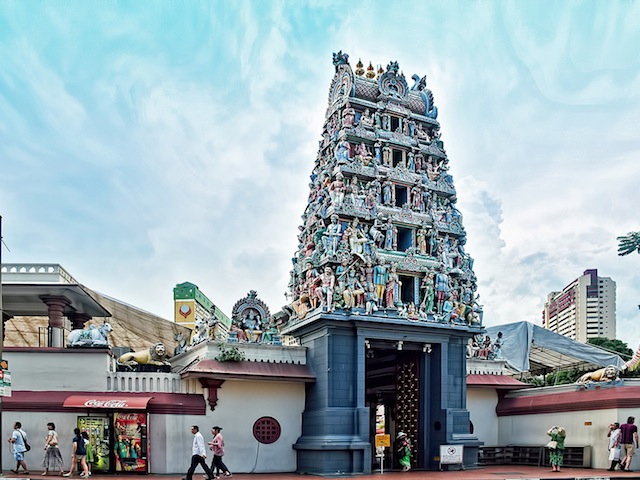 Two of the biggest yearly celebrations observed by Hindus in Singapore are Deepavali, the festival of lights, and Thaipusam, an elaborate procession where devotees pierce themselves in the skin, tongue, or cheeks as a mark of devotion. The Sri Mariamman temple (244 South Bridge Road) is Singapore’s oldest Hindu temple, and its intricate, eye-catching carvings of Hindu deities and other figures on its entrance tower are truly a work of art.

A plate of crispy roti prata served with a bowl of hot curry will make a sinfully rewarding treat after your Little India jaunt. Check out Tekka Centre for a plethora of North Indian cuisine. Indian rojak, a hodge-podge of fried dough fritters, bean curd, potatoes, prawn fritters, hard boiled eggs, cuttlefish and cucumber, is a must-try. Book a table at some of the best Indian restaurants in Singapore and have your fill of tandoori chicken and masala dosai. Mmm! From spices to perfumes and intricate home wares, Little India is a treat for the senses. Your tour of Little India won’t be complete without a trip to Mustafa Centre (145 Syed Alwi Road), the 24-hour shopping haven where you can find anything and everything. For modern takes on the traditional Indian sari, check out MYthology boutique (88 Club Street), which stocks beautiful pieces by emerging and established Asian designers like Rahul Mishra and Kiran Uttam Ghosh.

Eurasians – descendants of Europeans who married Asians – may make up less than 1% of the population, but they have still made a huge impact in the country, not unlike our second President Benjamin Sheares. For warm, homey fare that blends European and Asian flavours, look no further than Quentin’s Eurasian restaurant (139 Ceylon Road), which makes a wicked Devil’s curry (a signature dish for Eurasians). While you’re there, try sugee cake, a fluffy and buttery cake made with almonds. Retreat from the summer heat with a few local beers at Immigrants Gastrobar (467 Joo Chiat Road). Their menu pays homage to tastes and flavours our forefathers enjoyed, like singgang, a non-spicy Eurasian dish of wolf herring cooked with seven different spices. *Immigrant Gastrobar is already closed

Eurasian traditional garb like the baju panjang have a distinct Portuguese influence, and dancers at weddings and events usually wear traditional Portuguese costumes in red and white. Get cracking in the kitchen after arming yourselves with Eurasian cuisine cookbooks by Mary Gomes (who also helms Mary’s Kafe, 1 Queen Street), or pick up a few choice phrases from Kristang language books – largely similar to the Malay language – most easily found at the reference section in the National Library (100 Victoria Street).

This hybrid culture is a thriving one – especially in relation to food – although a lot of its practices are fast disappearing. The community comprises Peranakan Chinese, Chitty Melaka (Peranakan Indians), and Jawi Peranakans (who mostly reside in Penang, Malaysia). Make a trip down to the Peranakan Museum (39 Armenian Street) to view a large collection of Peranakan artefacts in Southeast Asia, and go on a guided heritage tour of the NUS Baba House (157 Neil Road), once an ancestral home of a Peranakan Chinese family, to discover more about the lives of nyonyas and babas (the terms for women and men respectively) in the early 20th century. Traditional Peranakan kebayas are delicate creations that bear intricate floral embroidery, so quality is definitely assured. Rumah Bebe (113 East Coast Road) is a quaint store in Katong where you can pick up a beautiful pair of embroidered nyonya slippers or elegant organza-silk kebayas. Take the time to explore the Joo Chiat area, and you might just stumble onto great finds like vintage furniture pieces along the way.

This article can also be found on www.YourSingapore.com.

Marissa is our resident culture vulture, always on a mission to uncover what's happening around town. Besides concocting witty word plays, she's passionate about food and exercise, and has a sense of humour too big for her own good.