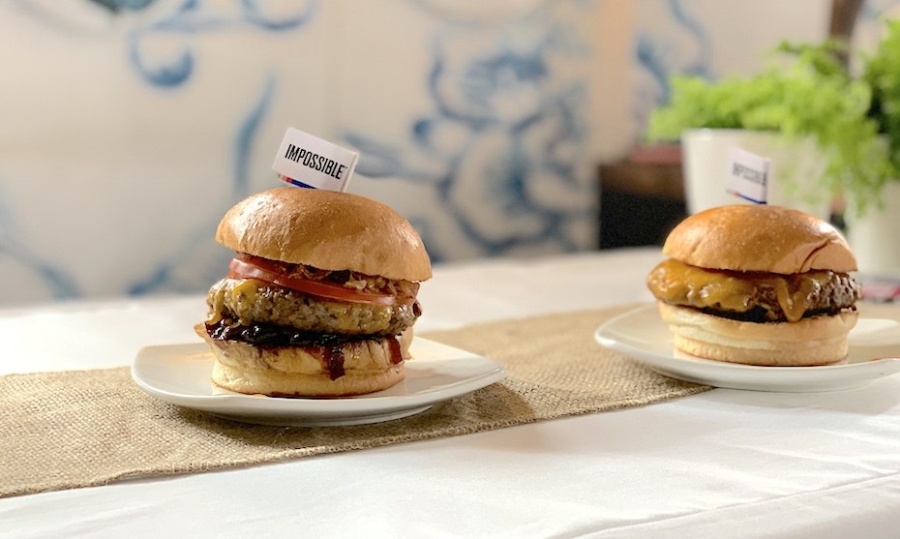 Impossible Foods aims to end all meat product by 2035 and we think it might happen with this plant-based beef.

Is it beef? Is it chicken? No, it’s plant-based meat! We’ve never seen such hype over an alternative to beef and it’s all thanks to Impossible Foods. Is the iconic Impossible Burger a godsend for vegans and vegetarians? Famous for its similar taste and texture (the burger patties even takes on the same ‘medium-rare’ appearance as they cook), this is being hailed as a plant-based alternative with a smaller environmental footprint –  that everyone can get into.

After debuting in 2016 at Momofuku Nishi restaurant in New York City and making its way to nearly 150 restaurants in Hong Kong and Macau, the next step was indubitably a Singapore debut. Impossible Foods has partnered with eight leading restaurants including Cut by Wolfgang Puck, Bread Street Kitchen by Gordon Ramsay and Park Bench Deli, Potato Head Singapore and Three Buns Quayside by Potato Head and Privé Orchard so from 7 March, you can try it for your yourself.

We got the first taste and here’s the verdict…

We were one of the lucky firsts to try the plant-based meat at Potato Head and let’s just say, it blew our minds. Group Executive Chef Adam Penney who leads the kitchen at Three Buns Quayside and Potato Head Singapore has whipped up two new Impossible Burger dishes, The Impossible Dream ($27) and The Impossible Chedda ($23). At first glance, the burgers could fool any meat lover  – the patty was nicely charred and juicy. You could even see the medium-rare effect of the burger when you bite into it.

The Impossible Dream, served with XO mayo and a lovely tomato and onion marmalade on the Three Buns’ signature toasted demi brioche bun was exceptional  – without a doubt, a unanimous favourite. The Impossible Chedda is your no-frills cheeseburger alternative. We overheard a vegetarian say it’s the first cheeseburger he’s had in 11 years and he was thrilled. So are we my friend, so are we.

But we do feel that the preparation of the Impossible meat plays a huge part in imitating the texture, mouthfeel and taste of real beef. The Juicy Lucy Impossible meatball spaghetti ($19) prepared by Executive Chef Robin Ho of Prive Orchard was more ‘mushy’ and didn’t offer the satisfaction of chowing down a real meatball. On the other hand, the Impossible satay sliders ($15) topped with cucumber, onions, mango and a fragrant peanut sauce proved that Impossible meat is still pretty damn versatile.

A hawker takeover is also in the works

Our lifestyle writer, Amelia, also went to the pop-up event at Lau Pa Sat (a haven for local favourites), which previewed Singaporean eats with a meatless twist. She nipped in for a few bites:

We have to say that the use of Impossible’s minced ‘meat’ had the most convincing meaty taste in the ginger kway teow (Lai Heng Fried Kway Teow). On the other hand, it was nearly undetectable when wrapped up and fried inside the crispy spring rolls (Sunny Viet) and crispy pancake (Empress).

One of our local faves, Park Bench Deli also made an appearance with the Impossible Burger, made to look like a ground beef patty that’s cooked exactly medium rare. We can’t think of a better way to cheat on our regular cheeseburgers… Major props to all these F&B outlets, we say, and we can’t wait for these items to debut on their regular menus. Founded by biochemist Dr. Patrick O. Brown and backed by big names like Bill Gates, Google Ventures, Horizons Ventures and UBS, Impossible Foods aims to replace meat production by 2035 with an ingredient that’s just as versatile in the kitchen. This is a great initiative ‘cos its great for the environment. When compared to ground beef from cows, the Impossible Burger uses 87% less water, 89% fewer emissions and 96% less land.

Real talk: we’re not saying this is the singular answer to a meat-free world but if you’re looking for a near-perfect meat alternative, Impossible Foods is a pretty solid way to start. So are you game to try Impossible Foods? Talk to Nicole about pop culture, movies or makeup and you’ve got her attention. Brownie points if you bring cocktails – coffee works too.