From a taste of the first soto Betawi to a sip of the first es teler in Jakarta, Jelajah Rasa takes curious foodies on one of the most interesting food tours in the city.

If you’ve been curious to try hyper local food and simply don’t know where to go, Jelajah Rasa is a great way to see Jakarta through a different perspective. Combining their love for food and history of the city, Indra Wihodo and Kevindra Soemantri started the culinary walking tour in October 2016 as a way to take fellow curious foodies on a tasting trip through particular neighbourhoods in Jakarta. The engaging tour explores underrated eateries in a three-hour easy trek with plenty of mouthwatering pit stops.

We joined Jelajah Rasa’s tour of historic Menteng that started with a quick hop on the local commuter train. Having never been on this mode of public transport in Jakarta before, we were pleasantly surprised at how clean and efficiently the trains ran. High hopes for the MRT! The walking tour’s first stop was Metropole, a refurbished art-deco building that was historically the first grand theatre in Jakarta. Before the refurbishment, the streets next to Metropole (then Cinema Megaria) were dotted with warung kaki lima, featuring legendary eats such as the Pempek Megaria and Es Teler Sari Mulia Asli – one of the first es teler vendors in Jakarta. These days, Metropole has been upgraded, while the crowded streets have been turned into an outdoor hawker centre-like food court – roof and all – where you can have your fill of local delicacies like fresh rujak, and said creamy es teler.

From there, the tour heads down to Taman Ismail Marzuki in Cikini, the iconic cultural compound where Soto H. Ma’ruf still stands until this day. The humble rumah makan has been home to Jakarta’s first ever soto Betawi since 1940, even before Indonesia gained independence. Their legendary soto is much-loved by locals – even President Jokowi and current Governor of Jakarta Djarot have frequented this spot. It’s not hard to see why – the luscious broth is complex and flavourful and you have your choice of beef meat only or broth with jeroan – offal – a delicacy for those who dare. 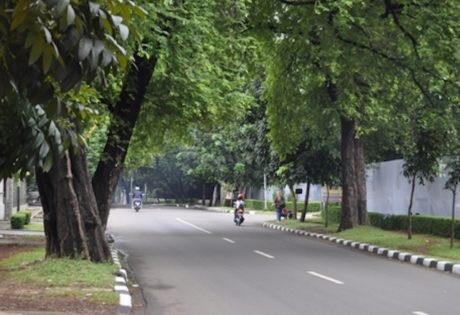 A Guide to Menteng

The last stop was Al-Jazeerah, a restaurant doling out authentic Arabic cuisine in the heart of Cikini. We finished off with a large dinner where sampling the beloved Nasi Mandi, a traditional fragrant Arabic rice that comes with chicken or lamb, and is served family-style on a large platter. We also couldn’t get enough of their fatoush salad with extra crunch, baba ganoush, ending the meal with a palette pleasing Arabic teh tarik.

Despite being native Jakartans, we had never been to any of these spots and were thrilled to put three more restaurants on our fave list. Thanks to Jelajah Rasa for teaching us a few new things about our hometown (while stuffing our face in the process) – we’ll be keeping an eye out for the next tour.

Want to join Jelajah Rasa on their next culinary excursion? Head to their website and follow @jelajahrasa on Instagram to keep up on their latest happenings.