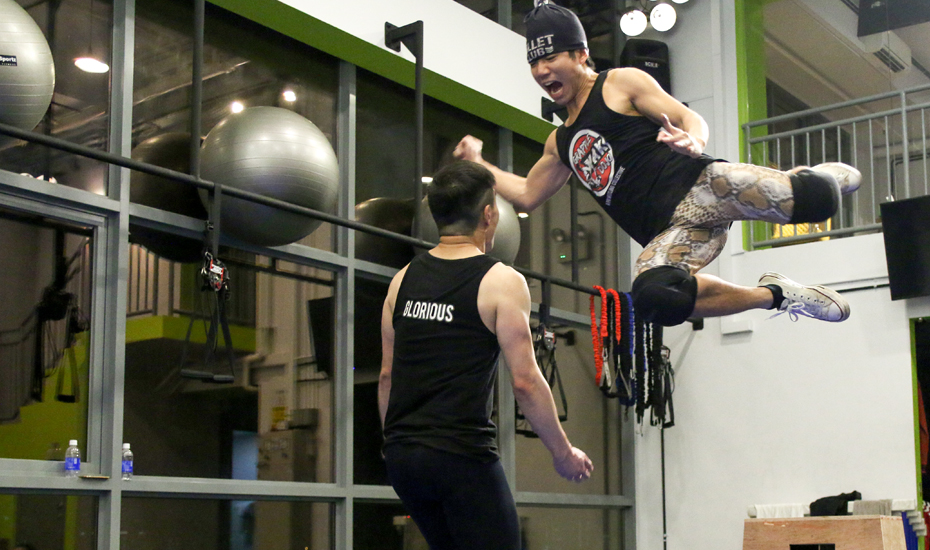 Fresh on Fitspo Find: Grapple MAX Dojo’s classes are affordable, fun, safe, and suitable for both men and women

Snap mares, scoop slams, clotheslines and sunset flips – if these terms don’t fly over your head, you’re probably a fan of professional wrestling.

Yes, I’m referring to that flashy, violent, ‘fighting’ activity that you see on shows like WWE (World Wrestling Entertainment) – complete with high-flying acrobatics, campy dialogue scenes reminiscent of daytime soaps, and some of the most gung-ho fans in the world.

But as much as pro wrestling is commonly perceived as fantasy and performance art (I admit: icons of pro wrestling have included witch doctors, clowns, and undertakers), it is also very much a physically-demanding sport – and in the same vein, form of fitness.

Enter Grapple MAX Dojo, a burgeoning pro wrestling gym that’s tapped into this epiphany and introduced a new way to shake up your fitness routine. Run by seasoned local trainers, the sessions here are suitable for both men and women, and cater to both pro wrestling zealots and #fitspo chasers simply looking for a class that’s more active than Pilates but less dangerous than Muay Thai.

I could probably tell you everything about the history of pro wrestling. But how it specifically relates to a fitness enthusiast? I’ll leave that to the experts. That’s why I swung by a Grapple MAX session to chat with trainers, “Greg Glorious” and “The Ladykiller” Dennis, to fill you in.

So first up, what is professional wrestling?

Greg: I like to refer to pro wrestling as storytelling through simulated combat. It’s a highly physical performance intended to engage and captivate a live audience, by inhabiting larger-than-life characters and executing challenging athletic manoeuvres. Most people’s first exposure to pro wrestling would be on TV, through companies like WWE (World Wrestling Entertainment in the US) or NJPW (New Japan Pro-Wrestling in Japan).

Presuming I don’t watch WWE and have no idea what pro wrestling entails, why should I be interested in this at all?

Dennis: Pro wrestling is special because it’s an unconventional activity that emphasises not just physical, but a theatrical performance as well. Sometimes, it’s an action flick; sometimes, it’s a comedy; or sometimes, it’s a drama – it’s once been famously described as ballet, with violence. The Grapple MAX syllabus and culture have been developed from scratch to welcome existing wrestling fans, as well as newcomers with no prior experience.

How is this different from other contact activities like MMA and Muay Thai, or even Olympic wrestling?

Greg: There certainly are some similarities! Just like the sports you mentioned, Grapple MAX emphasises the importance of physical conditioning, and putting in hours and hours of disciplined training to ensure correct form and safety.

What makes our sport so unique is the goal to ensure that both you and your opponent come out of each bout unhurt and unscathed, working together to tell a compelling story to the viewing audience, rather than working to inflict genuine pain on each other.

What can I expect from a session at Grapple MAX Dojo?

Dennis: Every session begins with some fat-melting HIIT. Then we move on to gymnastics drills that include rolls, handstands and cartwheels. And finally, the really fun stuff!

At this point, we teach basic pro wrestling techniques, ending in a mini sparring session before the class is over. It’s something like a short wrestling match that features the skills you’ve learnt for the day. We employ a grading system, so that we can tailor classes to our students’ abilities. Actively tracking our students’ performance and progress is one of our keys to delivering value.

And what health and fitness benefits will I find in an activity like pro wrestling?

Greg: Performing a live pro wrestling match is incredibly challenging. Performers need to be in good cardio condition (no breaks during the show!), possess sufficient physical strength, while having the situational awareness and performing ability to engage the live audience and tell a story.

Our Grapple MAX training sessions are designed specifically to prepare our trainees for this. Our interval training drills focus heavily on plyometric exercises, and help improve cardio and muscular development. Gymnastics and chain wrestling drills are taught with clear step-by-step instructions, allowing trainees to gradually develop core strength, balance and flexibility. Our trainees are also encouraged to improvise during the unrehearsed sparring bouts that cap off each session, working up a bucketload of sweat while developing mental alertness and situational awareness.

It all looks so violent and painful though! Is it even safe?

Dennis: That’s the idea! We do a far better job than footballers who pretend to be hurt. The key word here is that it only looks violent and painful. Our students are trained to deliver and receive moves that seem devastating, but are 100% safe. Constant instructor supervision keeps our guys from getting injured, and the grading system ensures no one attempts techniques that are beyond their ability.

So how did Grapple MAX Dojo even come about?

Greg: Having performed in the local and regional wrestling industry for over three years, Dennis and I saw an opportunity to explore areas not yet targeted by what was already available in Singapore, and to raise awareness for our activity. Realising that we had similar goals, we both left our respective full-time jobs in 2015 and dedicated the better part of a year to planning Grapple MAX.

Personally, having trained overseas in Japan and Vietnam and being immersed in the Japanese culture of pro wrestling, I experienced first-hand how structured and disciplined the training was, and how pro wrestling was such a well-accepted part of mainstream culture over there. I wanted to adapt some of that to the local scene.

Can you tell us more about yourselves as trainers? And you guys have some pretty interesting aliases…

Greg: The local training team consists of “Greg Glorious”, “The Ladykiller” Dennis, and “The Aerial Sniper” Nyc. Collectively we’ve performed in various countries around the region such as Taiwan, Thailand and Hong Kong. I also currently represent Malaysia Pro Wrestling (MYPW) as their World To Regional Champion, while Dennis has held the MYPW Extreme Division Championship and is the current Kingdom Wrestling Federation / Wrestle Square (Kurdistan and India) Cruiserweight Champ.

In-ring, our characters each bring a different flavour to our performances. Nyc, the youngest member of the team, employs a high-flying acrobatic style; Dennis tends to play to the fans and peppers his matches with a lot of showboating; while I bring a more methodical, technical style to the ring.

The three of us aren’t doing this alone though! We’ve also engaged Japanese pro wrestling legend, Dick Togo, as Grapple MAX head advisor. Still wrestling full-time in Japan, the 25-year veteran has been a key part of our team, helping us develop our in-house syllabus, and will also be in town to conduct masterclasses later this year.

Pro wrestling is a performance sport, so will I actually get the opportunity to perform?

Greg: Yes, if you want to! As we’ve mentioned, the main goal of pro wrestling is to engage a live audience. We believe in easing each trainee into the experience of performing, which is why we ensure that each class ends in a low pressure mini-performance – though you’d be surprised how exhilarating just performing in front of 15 of your own fellow trainees can be!

We also plan to hold regular small public showcases for our trainees, with our first coming up on 1 April, and are presently in talks with venue partners to host us in future. For those looking to take the next step into performing on a larger stage and wrestling overseas like us trainers, we’re also working on establishing working partnerships with regional companies to provide opportunities for our advanced students to perform.

Is this class also suitable for women? Does training differ?

Dennis: Our classes are conducted for both men and women. In fact, our first female trainee has just attained Grade 1! The training programme doesn’t differ, and we impose the same standards regardless of gender. In our experience, women typically don’t hesitate to ‘beat up’ their male sparring partners. This was very clear when we recently ran a Valentine’s Special, and 70% of the enquiries we received were from women dying to drag their boyfriends or husbands along to a session at Grapple MAX.

What is the ultimate goal for Grapple MAX Dojo? Do y’all have a message you wanna spread?

Greg: We want to establish an authentic pro wrestling culture in Singapore, while creating an economically sustainable environment for the industry, its coaches and performers.

Through Grapple MAX, we aim to attract new segments to pro wrestling. We’re making wrestling appealing as a social and fun fitness option, especially to non-wrestling fans and people with no intention to perform professionally. We’ve even recently started running stag parties and private events, so we’re really pleased to see mainstream awareness picking up!

What do you do with friends on a Friday night? Catch a movie? Spend a night out at the pub? Watch a pro wrestling gig at Grapple MAX? We’re going to make pro wrestling a part of that conversation, as a viable regular entertainment option.

And finally, what personal fitness tips do y’all have outside of wrestling?

Greg: Don’t count calories. But lay off the carbs at night.

Grapple MAX Dojo will be having its debut showcase on 1 April at 4pm. Grade 1 trainees will take on Grapple MAX coaches and will feature Japanese wrestling legend, Dick Togo, in his only Singapore performance. To buy tickets, drop a private message to their Facebook page.