Somewhere along the back alley off Gemmill Lane is a rusty, industrial door that houses a restaurant of surprises. For a glimpse of its expectations-defying ways, you’ll need to walk to the end of the street starting from O’Batignolles, turn right, and find a small cutout metal signage that says “Maggie Joan’s”.

Opened by Glen and Daniel Ballis, the same father-and-son duo behind restaurant Moosehead, this new hole-in-the-wall establishment takes its name after the Ballis’ grandmothers, Maggie and Joan. If you’re thinking that this means food made with generations-old recipes, this is where you’re in for your first surprise. The Mediterranean cuisine may be a reflection the old ladies’ hometowns and culinary ethos (everything is made from scratch), but the dishes, created by head chef Oliver Hyde (formerly of Pollen), are modern – adventurous even. But more on that later.

The restaurant is a maze. Through the heavy, non-descript door of Maggie Joan’s, you’ll find yourself in a small, narrow space with tables flanking the exposed brick walls and the open kitchen at the far end. Move along further in the rugged space, and you’ll enter another dining area in front of the kitchen. That’s not even all of it: there is another adjoining section at the back, a cosier one with a long communal table and more polished than the other two space, which is great for large groups or private dining. 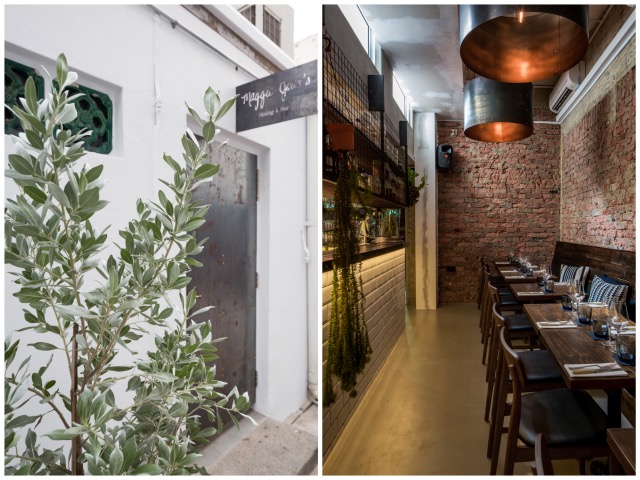 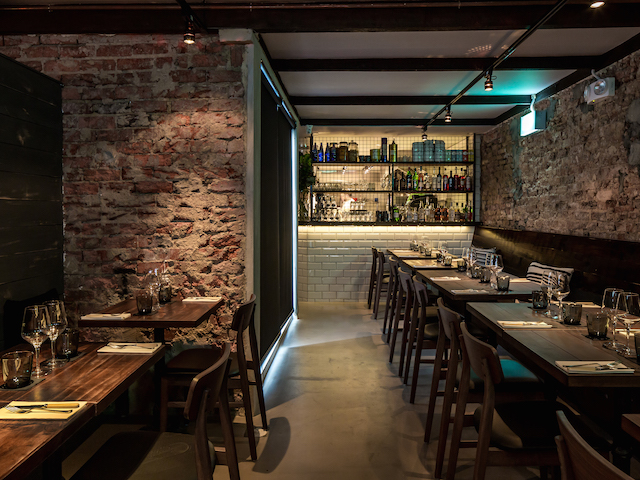 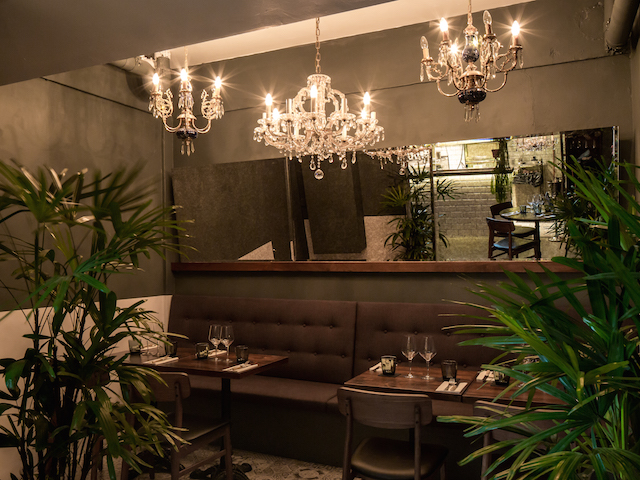 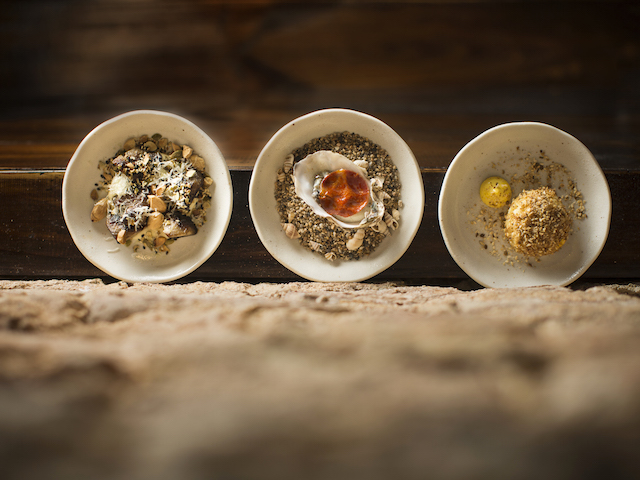 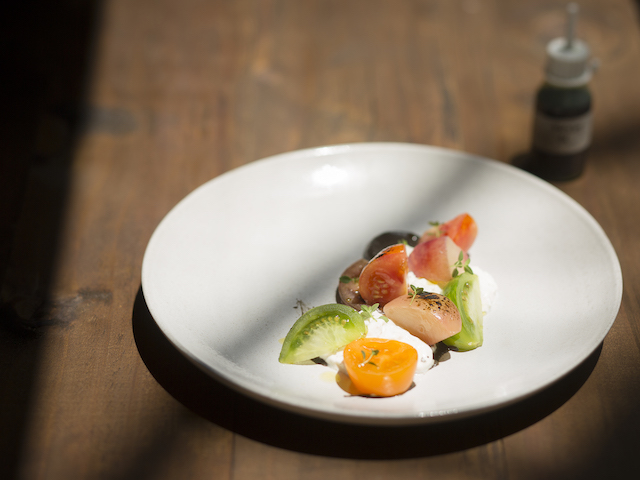 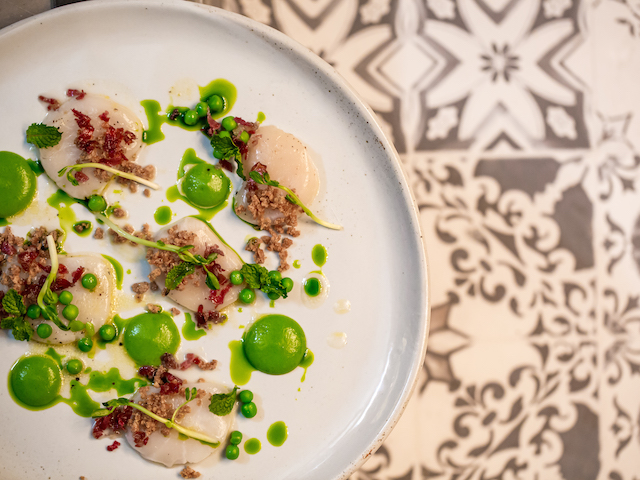 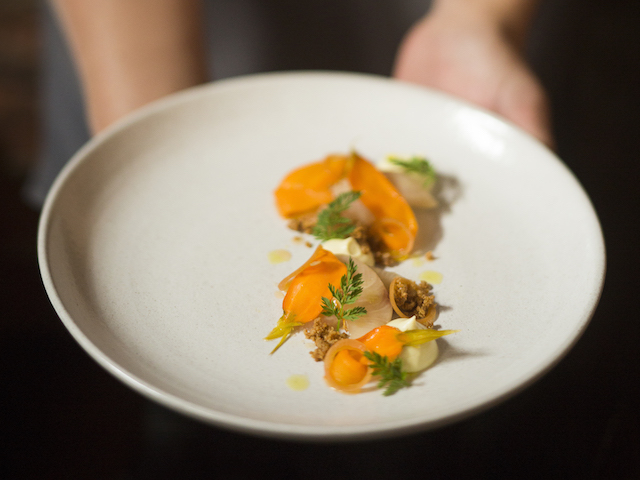 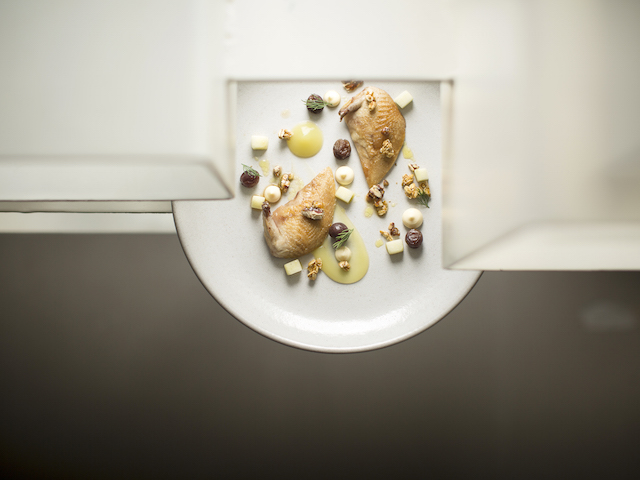 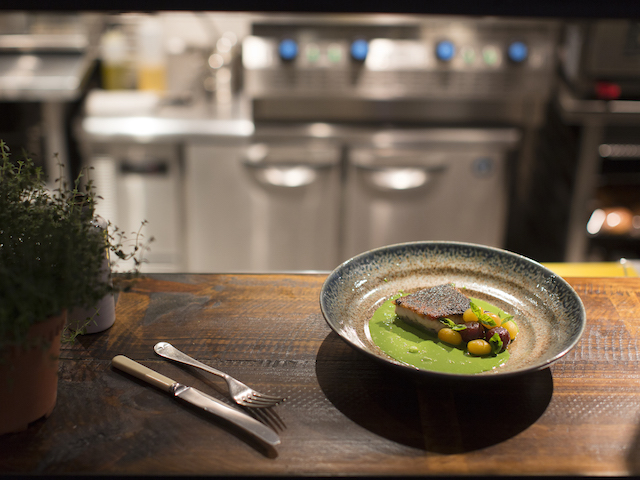 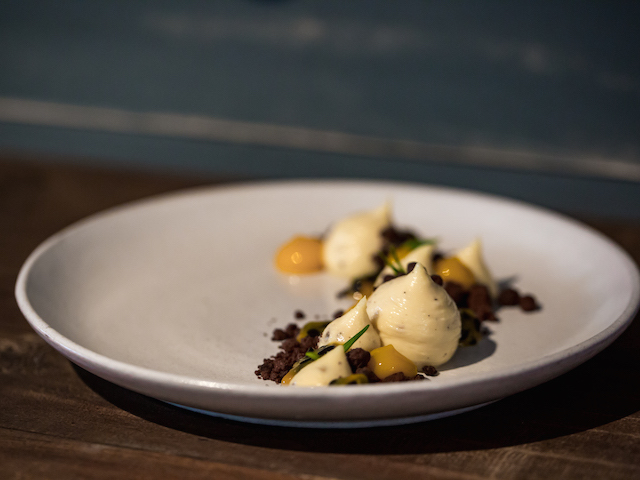 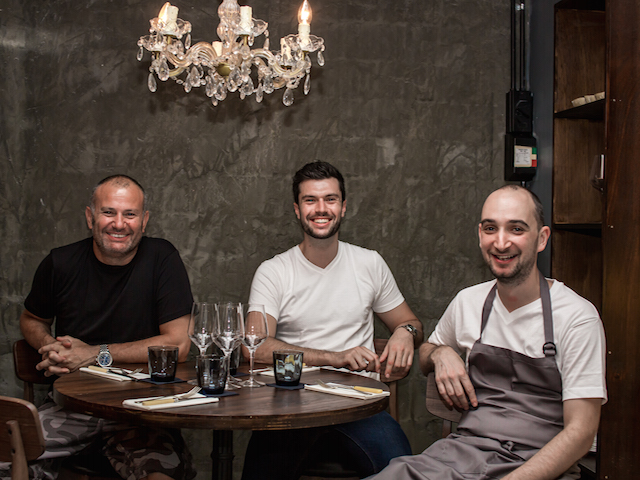 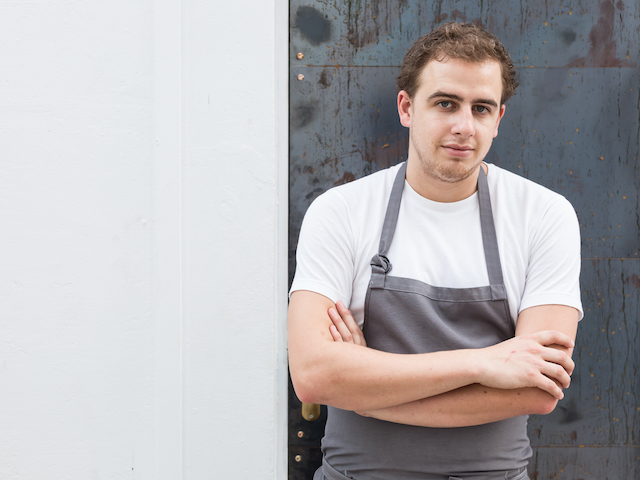 Back to the food: the menu is rooted in the bright flavours of the Mediterranean, so you can expect ingredients like olives, hummus, manchego, tomatoes, fresh seafood and vegetables on your plates. For starters, we had the house-made garlic and rosemary bread served comfortingly warm with hummus, some seriously addictive spiced pork scratchings, the egg (slow poached) that’s rolled in dukkah (a heady mix of sesame, coriander, cumin, hazelnut and panko) with saffron aioli on the side, and the pleasing roasted Jerusalem artichokes (which tastes more like potatoes than artichokes), doused in manchego cream and topped with mixed seeds and nuts for a riot of textures.

Our table of four then moved on to the entrées, which consisted of a salad of plump heirloom tomatoes, sweet peach and burrata, a beautiful plate of fresh yellowtail sashimi, pickled carrots and creamy-savoury branade, a sherry-marinated scallop carpaccio with pea puree and crispy ham, and a seriously smoky and tender quail accented with fruits. It’s evident that these dishes are created with a lot of fuss and thought, but they’re clean and light in taste to prep our palettes for heavier mains, like the roast seabass swimming in watery pesto made with vegetable stock with pickled tomatoes, and a braised, melt-in-your-mouth lamb shoulder marinated with harissa, a North African hot chilli pepper paste. We ended our meal with lovely medley of white chocolate, spiced crumble, and passionfruit, plus some figs that are soaked in red wine, honey, thyme and brown sugar, then served with fig jam, ricotta, almonds, and hazelnuts.

Considering that novelty is pretty rare in Singapore’s saturated food-scape, what the team at Maggie Joan’s has done is impressive. Oh, don’t forget to have some of their stellar wines and excellent cocktails while you’re there.