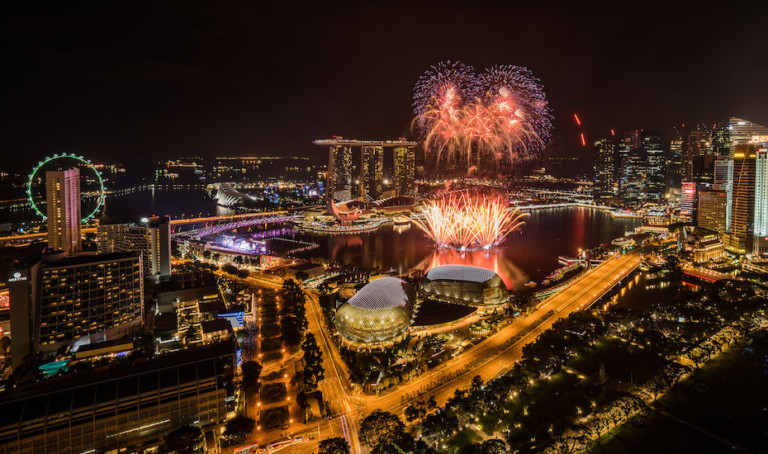 Those who are familiar with the year-end festivities in Singapore will know that the upcoming Marina Bay Singapore Countdown is one of the city’s signature celebrations. Staying put in Singapore this festive season? Don’t worry, you can have plenty of New Year’s Eve fun without leaving the country!

The highlights of this annual fiesta are centred around four experiential activity hubs situated in Marina Bay and the Civic District. Starting from 8 December 2017 ‘til the last day of the month, you can enjoy a slew of programmes set to take place at various public spaces, especially around the bay area.

A carnival for the young and young at heart

One of the biggest headliners is the Prudential Marina Bay Carnival, which spans two hubs at The Promontory and the Bayfront Event Space, and features over 40 fun-for-all rides and games ranging from roller coasters to water rides. The carnival—which will be opened from 4pm daily on 8 December—will also host its own fringe activities, including music performances by local artistes and a food fair. Entry to the carnival is free, while ride and game credits can be purchased on-site and online.

What’s a New Year’s Eve bash without the iconic dazzling fireworks display? To catch the show, head to any spot along the Marina Bay waterfront or secure a seat at The Float @ Marina Bay (be sure to have your tickets with you; you can get them for just $5.50 here or $8 at the door). While waiting for the countdown, you can take a walk around the outdoor bazaar or set up a picnic under the stars with your squad.

Free activities at the Civic District

The vibrant arts and cultural precinct will be transformed into a car-free zone on the last day of 2017 to make room for a line-up of free programmes. A sunset yoga session, a food bazaar, music performances, movie screenings – it’s set to be a busy night jam-packed with lots of things to do. Art lovers, make a beeline for venues such as the National Gallery Singapore and Asian Civilisations Museum for their extended gallery opening hours (10pm and midnight, respectively) and free admissions for certain galleries (from 10am and 5pm, respectively).

The season of giving to those in need

After all, this year’s theme is “Bay of Hopes and Dreams”, so why not take the time to make a difference? Sign up for the Santa Run for Wishes’ 2km run (part of the Marina Bay Singapore Countdown Charity Trail) on 9 December. Organised by the Make-A-Wish Foundation, all registration and donation proceeds will help grant wishes of children with life-threatening conditions.

For those who aren’t able to make it for the run, the full Marina Bay Singapore Countdown Charity Trail will also be open to public from 10 to 31 December. You can explore various hot spots around the bay while learning about the seven beneficiaries supported by the Marina Bay stakeholders. As an added bonus, there will also be mystery gifts for you to unlock when you complete certain activities at these hot spots.

This article is sponsored by Pico Pro