Bring on the tequila, tacos and Latin beats...

Sombreros on, maracas in hand – shake your way into a Mexican fiesta at these restaurants, clubs and bars…

Hola, amigos! It’s that time of the year again – Cinco de Mayo. The Mexican fiesta falls on 5 May which marks the historical date of the Mexican Army’s victory in The Battle of Puebla in 1862. What better way to celebrate like there’s no mañana than coming together for Mexican food, Latin tunes, and loads of margaritas and tequilas? Get the salt and lime ready, put on your sombrero and kick it back like they do in Mexico at these restaurants and bars in Singapore…

4 – 5 May
Chimi’s is pulling all the stops for a mega fiesta with a M-A-S-S-I-V-E two-day lineup. For starters, they’ve split the events into two themes (adults-only and fun-with-the-family) so there’s something for everyone. First up, look into your future with tarot card readings and channel your competitive side with Mexican themed carnival games like a cactus ring toss, down the donkey and pinatas. DJ Abdelux and Labaude will be busting out afro and Latin Electro beats to really get you in the festive mood. The next day, bring the kiddos down for colouring competitions, face-painting, and carnival games like pin the donkey. A ticket includes a bang-for-your-buck deal of three tacos, a tequila shot, beer or soft drink, a lucky draw coupon and three-game coupons.
Corona presents Cinco de Mayo Feasta, 4 May: 5pm-11pm; 5 May: 12pm-11pm; Chimi’s, 1 Marina Boulevard 01-01, Singapore 018989 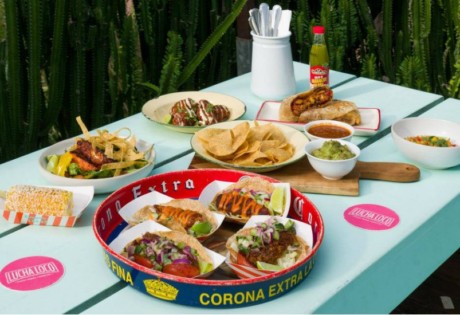 Mexican restaurants in SG to go loco for

4 May
Your Cinco De Mayo night isn’t complete without a trip to Haji Lane. The party’s at Piedra Negra so come on down for a complete Mexcian takeover with free tequila shots, a lucky draw, Latin salsa beats, a photo booth and of course, Mexican grub. More details are underway but we hear there’s going to be a costume competition, buskers on the street, a photo booth and plenty of food and drink promos. Psst.. make your way down from 4pm-5pm for a free tequila shot.
Cinco De Mayo 2019, 5pm-11pm, Piedra Negra, 241 Beach Road, Singapore 189753

Feast on this: Cuba Libre Cafe & Bar will be putting together a special menu of Espolõn margaritas, shots and Mexican tiraditos curated by our Executive Chef, Alex Moreno and a special menu of mini pork tacos, lubina seviche and ropa viega bites at a steal. Dj Boikay and Adrenalina will pump up the entertainment quotient.
Cuba Libre Cafe & Bar, 8pm-4am, Block B, #01-13, Clarke Quay, River Valley Road, Singapore 179021

4 May
Did someone scream ‘tequila’? Time to get boozy with plenty of tequila and margaritas as you spend your noche with the SPC posse. With these folks, you’re in safe hands; Singapore Pub Crawl organises weekly pub crawls where people can socialise and drink in a safe and fun environment. Salud!
Singapore Cinco de Mayo Pub Crawl, 7.30pm-11.30pm, Fat Pigeon, 80 Raffles Place, Singapore 048624

Happy hour of the week: The Margarita edition

Go loco, Muchachos is back for your burrito fix