Chow down on top-notch dishes and tipples from Burger Joint, Birds of a Feather, boCHINche and more at this street festival

A lunch haunt for office drones by day and a hotspot for after-work tipples by night, Amoy Street is a slice of grub and booze paradise in the CBD. Usually sleepy on weekends, the street will be transformed into a buzzy street festival come Sunday, 23 April, for the second edition of the Amoy St. Bloc Party.

If you were part of the 3000-strong crowd at last November’s inaugural edition, you’d know what to expect: lots of revelry, dancing and feasting, with the help of some of the hood’s best restos and bars. Last year’s participating restaurants are returning to serve up their most delish items, including French-Japanese izakaya Le Binchotan, Mediterranean joint Maggie Joan’s, New York cocktail bar Employees Only and more. After loading up on grub, dance up a storm on the streets with live performances from local music acts!

After partying up on the streets, the festival continues indoors at the playful and kitschy Ding Dong. The eclectic Southeast Asian restaurant will be turned into a retro dancefloor until the clock strikes twelve. 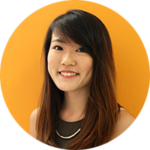