In this edition of Bar Banter, we chat with the founder of NATIVE in Telok Ayer, and find out a little more about foraging in Singapore and his drive to celebrate regional ingredients

“Would you drink a cocktail with ants in it?”, asked my editor before sending me off to this new bar on Amoy Street. With no small amount of trepidation I made my way to NATIVE wondering what manner of maverick mixology was in store for me (read more in our full review of NATIVE). But beyond peculiar cocktails, NATIVE’s raison d’être is a celebration of regional ingredients. In this edition of Bar Banter we interview the man behind these quirky concoctions on his inspiration, regional flavours, and urban foraging.

So what’s the story behind how you got into bartending?

When I was back in school, I was looking for some spare cash so I worked different jobs and did a lot of part time work, but the pay just wasn’t that good. A friend was working at Zouk and he asked me if I wanted to work behind the bar. I was saving for a motorbike and paying for my school fees so I took the job. I never thought it would be a long-term thing, but a couple of years in I realised that was what I wanted to do. That was ten years ago.

What did you want to do initially? 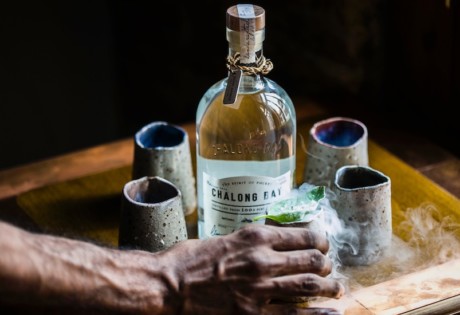 This New Bar Gives a Toast to Regional Ingredients

The plan was to finish school and go get a degree and a “real” job like a lawyer or a doctor, but I think as I grew up and tried several corporate gigs, I realised it just wasn’t for me.

Why this particular focus on regional spirits, furniture, and music?

When I first started exploring the craft spirits movement I met a lot of people who told me that Singapore doesn’t have a lot of fresh produce. I kept hearing that people prefer products flown in because they are perceived to be novel and rare. But these were ingredients that I was unfamiliar with. I mean, if our grandparents went to the wet market they wouldn’t find caviar or foie gras would they? When I got a chance to run a bar, I wanted to do something that was truly representative of us. So I started foraging a little bit and found a lot of ingredients nearby. I began to incorporate them into my drinks. Once my drinks became entirely regional, it seemed natural to do the same with my glassware, furniture, and finally music.

The idea of foraging in such an urban city is an interesting one. How did you decide that you wanted to forage?

Many people think that there aren’t a lot of things growing in Singapore because it’s small and urban, but we have to remember that we’re still part of Southeast Asia so there are bound to be things growing here. It may not be as much, but Singapore has a lot of history with plantations and cultivation. An example is Ann Siang Hill, it used to be a big plantation and even though it’s built up now, there’s still a lot that remains from the plantation. When it rains, you’ll find wild sorrel everywhere!

So what can you find in this area?

What did you think the reaction would be when you unveiled your Antz cocktail?

I expected people to freak out and that it might be challenging to get customers to try it but I was so surprised by the strong reception! People aren’t afraid, they come here just to try the Antz cocktail. I also noticed that the women are more adventurous and willing to try it than the men.

(Find out more about Vijay’s Antz cocktail in our full review of NATIVE.)

What’s the next ingredient you’re trying to work into a cocktail?

Soy sauce! I’ve just found this Singaporean soy sauce maker so I’m still trying to figure out how to incorporate it into a cocktail – not just in terms of flavour, I want it to have a back-story as well.

What cocktail on your menu would you recommend to people who are a) feeling playful, b) romantic, c) adventurous, and d) having a terrible day?

If you’re feeling playful I’d recommend the Antz, something a little offbeat. If you’re feeling romantic definitely the Red Light District because it’s got tongkat ali (a traditional herbal aphrodisiac) in it and it’s a little bit cheeky and fun for a date. For someone who’s adventurous, I’d recommend the Invisible Man because it’s a warm cocktail so it’s a completely different dynamic. If we get a customer who’s just having a terrible day, really, I’d just get him a beer or a gin ‘n’ tonic. When they’re feeling better then we might steer them towards something a little more adventurous. After all, our aim is to make our customer feel comfortable.

Are there any bartenders you’ve worked with that inspire you?

When I worked at Operation Dagger, Luke, the co-owner and head bartender there was a very good mentor to me. He was very patient, and he guided me and helped me put my thoughts together with regards to cocktails. Industry-wise, I’m always inspired by people who really put in the hours. To be successful in this line you need to know nitty gritty things like costing and customer relations – it’s more than just putting together a drink.

Thirsty? Check out our Hot New Bars for April as well as our review for Freehouse in Telok Ayer.