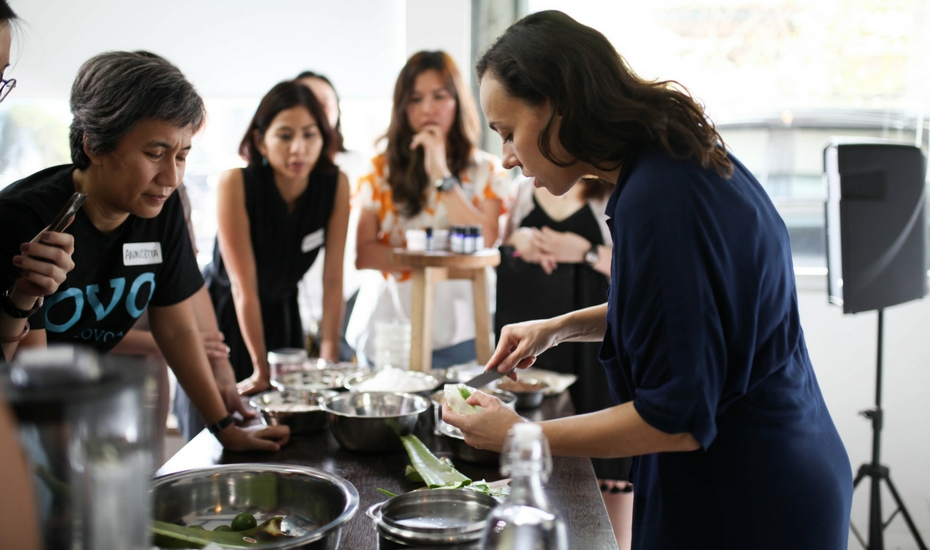 In Indoestri Day #6, visitors learn what it takes to be #SelfMade

Despite it being our third visit to Indoestri’s annual showcase dedicated to all creative minds in Jakarta, we were still excited to see what the makerspace had in store for this year. In the sixth instalment of their signature event, Indoestri adopted the theme #IAmSelfMade, an effort to show visitors that being self made is possible for everyone and anyone.

Following previous chapters, the event celebrated the doers and makers by showing through example, with a variety of live demonstrations, workshops, and inspiring talks to get things going. Upstairs in the makerspace, live demonstrations included never-before-seen makers such as Irene Yuliana in Weaving, Janet Jane from Fiber Motel in Macrame Wall Hanging and the guys from Denim Jeans Batavia in Denim Jeans Making.

In spirit of the theme, we took advantage of Indoestri’s one-day workshops and signed up for the bookbinding class by figure notes. Even though our day-to-day consists of us crafting words behind a digital screen, in six short hours, figure notes turned us into fellow makers by teaching us to put together sheets of paper, a couple wooden pieces, and a strand of thread into a legit #SelfMade note book. Go us! Downstairs, Militza from Little Green Dots taught eager learners how to make of natural skincare.

Outdoors, Dawn and Willow hosted Pasar Indoestri where 16 local brands had the chance sell their products while also telling their #SelfMade stories. Amongst them, we spotted Sukkha Citta, a brainchild of Denica Flesch who is a former student of Indoestri’s Longhaul program and now a promoter for rural artisans in villages all over Java through her fashion business.

We also caught up with a discussion panel moderated by the makerspace’s co-founder Leonard Theosabrata featuring Grace Natalie (Chairwoman of Partai Solidaritas Indonesia), Keenan Pearce (Co-founder of Makna Creative) and Yudhi Soerjoatmodjo (Curator/Producer of Dapoerdongeng) who all gave their insights on their respective #SelfMade journeys. They also mentioned how during the process they dealt with many differences – be it characteristics or opinion that came along and later expressed the importance of embracing these elements of diversity for smoother journeys.

At the end of the day, we learned that there is no short cut to being #SelfMade, nor does it always mean being defined by success. Being self made means having a strong vision, a right attitude, and being able to endure both the ups and downs. Also, what matters most is not the destination but the experiences in between the milestones.

Feeling inspired yet? Join the #SelfMade movement and sign up for one of Indoestri’s next workshops.

Aditya is always in the mood to converse. If caught blank staring, he's probably just struck by sudden ideas for his next musical theater scriptwriting. He keeps Postmodern Jukebox exceptional renditions on repeat. And oh, Valar Morghulis.