Farina Situmorang is a tech-savvy entrepreneur who has applied her years of experience from some of the world’s biggest companies including Blackberry and IBM to a number of endeavors in Jakarta. Her consulting firm, Catalyst Strategy, has handled a number of interesting projects including the digital strategy for Joko Widodo. Maybe you’ve heard of him? Farina took time out of her busy schedule to talk about her epic selfies (hers has Mark Zuckerberg in them sometimes), the power of Indonesia’s youth, and where to get a good cup of joe in this town if you’re a java snob.

You have so much stuff going on right now. Can you give us a run-down?

It has been quite a ride since I moved back to Jakarta from San Francisco last year. I started my own consulting firm, Catalyst Strategy, and since then have been involved in so many interesting projects, including running the digital strategy for the Jokowi campaign, helping out venture-backed startups in Silicon Valley come into Asia, and developing growth strategies for some of the largest companies here. Besides consulting, I also launched a health food company called Naked Foods, which is developing a line of gluten-free, paleo bars and butters.

During the presidential elections, you were head of the Joko Widodo’s social media campaign. What was that like and what are your thoughts on the role of younger voters and technology in this last election?

It was an exciting time because there was a lot of hope for changes in the country. My team and I saw the potential for young voters to really make a difference in the outcome and how that power was somewhat untapped at the time. So we made a push to address the concerns of young voters through the use of social media outlets, an important source of information for many young voters. We created a comprehensive digital media strategy and launched the most successful political party page in Facebook’s history. In a matter of weeks we reached over 30 million voters and attained 2.5 million likes with more than 110 percent engagement. It’s numbers like these that make you realize the power of young voters and technology in making differences that can change the course of history. 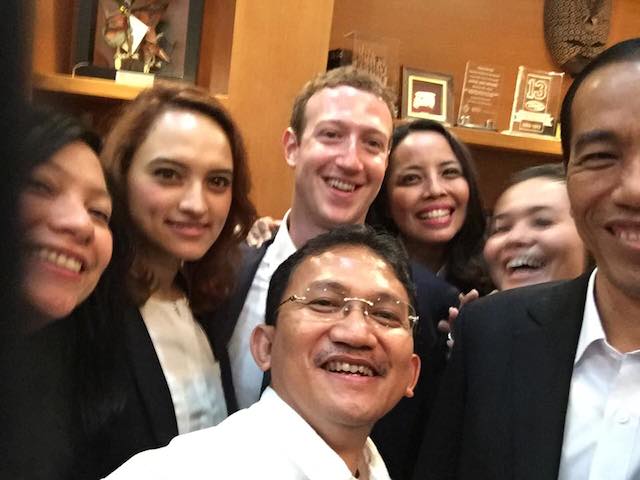 Let’s talk about that selfie with Jokowi and Mark Zuckerberg! How did that happen? Did you think it would it would get picked up everywhere, including CNN?

Yes, that selfie! When I first saw it on CNN’s 22 Selfies of the Week, I was so surprised to see it on the same list as my idol Beyonce. As much as I’d like to say it required an intense marketing effort from my part, this one was actually not thought out. At all. I took it because how many more times can I be in the same room as Zuckerberg and Jokowi? Either way, viral or not, I’m happy I was on the same list as Beyonce because who knows when that will happen again.

What is your professional background?

I’ve been working for technology companies almost my entire career. I moved to the US back in 2008 to do my MBA at the Kellogg School of Management at Northwestern University. After my MBA, I worked internationally in Waterloo, Canada, and San Francisco as a marketing strategist in the technology industry. In Canada I launched a global digital and retail marketing initiative as part of the turnaround strategy for Blackberry’s PlayBook tablet, which grew the business by 60 percent in sales. Then when I moved to San Francisco I worked for a venture-backed startup and headed all the digital marketing and business development strategies for the company. Working internationally not only exposed me to various projects but it also allowed me to work with a variety of people and different business practices. These people skills are actually the ones I’ve found to be most useful here. As an entrepreneur it is this flexibility in adapting to people’s working styles and personalities that has been the most challenging, yet fulfilling, aspect of my work. Outside of work, what are you interested in? We hear you’re quite a health nut.

Well, I wouldn’t call myself a health nut. More like a health nerd. I’ve always been interested in living a healthy lifestyle because to live optimally you have to be your healthiest self. I am constantly reading the newest research to educate myself on the best health practices for me. For example, I was vegan for many years but was constantly tired and didn’t know why. So I began researching other types of healthy eating and found the paleo lifestyle. The diet calls for eating natural foods, so think lots of vegetables, fruits, meats, eggs, seafood, even complex carbohydrates like sweet potatoes. Unlike people’s perception that it is a meat-only diet, I actually love that it advocates eating lots of vegetables and unprocessed foods. In fact, it is this love of natural foods that have inspired me to launch Naked Foods, which is my own line of paleo, gluten-free, and dairy-free nut butters and snack bars.

Last question, we hear you’re a coffee snob. Where do you go in town for a good cup?

I can’t believe you found out I’m a coffee snob! But now that you’ve asked I can say that the best coffee is the one I make for myself every morning, because back in 2011 I experimented every single day with brewing my own coffee, and kept track of my experiments on Excel to find the best ratio of coffee beans, grind consistencym and water for my favorite cup. So I really know the formula and the kind of coffee I like.

As for coffee shops, Common Grounds in City Walk is one of my favorite coffee places. It’s helmed by passionate coffee lovers who can spend hours talking to you about their favorite roasts and coffee beans. Not to mention they have an extensive selection of single origins and brewing methods, such as aeropress and V60.

Getting social with Farina Situmorang