With a welcome new home, Ismaya Live's We The Fest has grown from a one-day music fest in Parkir Timur Senayan to one of the biggest weekenders in Jakarta. Here are some of the most memorable moments from #WTF17.

Despite the pouring rain last year, We The Fest was still a major event. So the only thing they could do to top it? Triple the fun, of course, and boy was it a massive success. The fact that Ismaya Live!’s summer celebration of music, arts, fashion and fun shared a weekend with Art Stage didn’t deter a record-breaking 50,000 attendees from enjoying themselves at Jiexpo Kemayoran. Troy Boi brought the party, Dua Lipa was totally worth the hype, and even the President of Indonesia came to check the scene out. Ahead, we share festival highlights from #WTF17.

President Jokowi made an appearance!

Forget about the headliners – halfway through Charli XCX’s massive set, a huge sea of dancing bodies turned their attention away from the main stage to the private cabanas where President Jokowi could be seen donning a grey We The Fest baseball shirt while happily waving to the excited crowd. He wasn’t just there to enjoy what kids listen to these days, our prez even took some time to pose for selfies with graciously waiting festival attendees.

The Kooks live was our Account Manager’s dream fulfilled; the normally mainstream and radio-friendly Jonas Blue’s DJ set turned out to be one of the best sets of the weekend; the crowd of girls went crazy for LANY, while singing along to major hits like Good Girls and ILYSB; Dua Lipa’s electrifying performance was worth the hype; and Troy Boi totally brought the party, going wild while even dancing into the crowd. 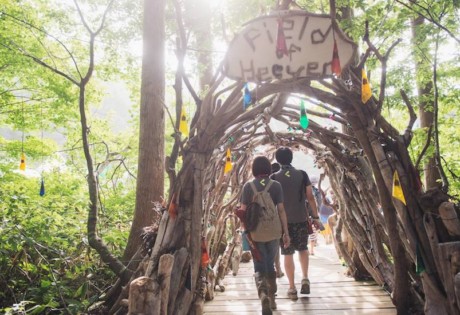 The music festivals around Asia to put on your bucket list

VIB was totally worth the money

Lengthy queues were rampant all over the festival, from the a sea of crop-top bearing attendees waiting patiently to get in to the long waits at the bar. Flash your Very Important Banana (VIB) pass however, and you were presented to a world of advantages. Shorter queue into the festival, a dedicated bar, killer front row views, and proper toilets – a complete festival luxury.  At the air-conditioned This is Bananas stage, bar tables and chairs were set up so you could enjoy a snack and bottle service while chilling up close and personal to your favourite artists. We highly recommend springing for a VIB pass next year .

If attendees wanted to cool down between sets, all they had to do was saunter over to the Cinema Club where the British Council and IFI were screening short films that you could watch whilst plopped down on a beanbag chair and hear via special headphones (just like a silent disco). You could also line up to take selfies recreated scenes from breakout Netflix show Stranger Things and Wes Anderson’s Grand Budapest Hotel.

Really not just about the music

If you still haven’t gotten the picture, music really wasn’t the only focus of the festival. Brands really got into the game. There was a full-on vanity area where attendees could get festival makeovers from professional make-up artists by NYX. Ready-for-the-summer braids were done up by H&M, while Prost offered face painting. Once you were all dolled up, prance over to Kit Kat’s Art Village where you could take pictures in a minivan. Ruang Rupa radio blasted 90s songs, while Mizone’s games area provided a little carnival-style fun. Finally, is there anything that you can’t Go-Jek nowadays? Even at the festival, going home was a breeze thanks to the dedicated Go-Jek booth that made going to and from the event super easy.

We The Fest 2017 Review: Headliners Big Sean and…