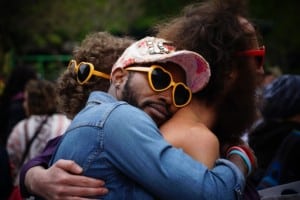 In a world that is increasingly more and more connected, we seemed to have lost our connection. What a difference a hug makes

As I was standing in the middle of Queen’s Road Central a while ago, crying, I got to thinking… I’m kidding; I’m no Carrie Bradshaw (can’t afford the shoes), but I did stop dead in my tracks after I heard the news about Anthony Bourdain and think that it was finally time to write this story, so here’s why I’m bringing hugging back.

In Hong Kong, and in many places across the globe, the standard greeting now, even between besties who share Netflix passwords, is a double-kiss on the cheek, and while I cherish the romantic notion, and it’s cultural significance in the likes of France, Spain and greater Europe, I truly believe that sometimes you need to forego the niceties and go right on in for a full on hug. Why I’m bringing hugging back

A hug is so personal and warm, and scientific benefits aside, they just feel nice, and I’m all about getting my cheap thrills wherever I can. Hugs are natural. When someone hugs you, it’s hard not to hug them back, even when they mistakenly set the alarm clock for 6:45am and you’d set yours for 7:15am and you’re wide awake and feeling mildly-resentful towards them, it’s really hard not to hug them back. Hugs are human connection at its purest, and I’ll be damned if I’ll not get all I’m due while I’m here.

I started transitioning from the standard double-kiss on a whim. I hadn’t seen a journalistic contemporary for a while, so when we locked eyes across a crowded room at an event, we both went in for the first kiss, and then I just kept going straight in, moving deftly like a young Baryshnakov from a cheek graze to a bear hug within seconds. He had no idea what was going on. I got Frog Prince lip gloss on his shirt. I guess it’s good he’s single, or it would have laid the groundwork for a terribly cliché story.

While explaining the reasoning behind my new-found kiss’n’hug combo, he suggested perhaps letting people know in advance, purely in the interest of public safety. A group email on why I want to embrace the kiss-embrace seemed a little bizarre, and I did think about starting a Free Hugs group on Facebook for my friends, but neither of them seemed quite right. So I thought I’d write it here, where anyone could see.

Because when I was standing on that street the other night after reading that we’d lost one of the true, true greats, the first thing I thought was: I wonder who’ll miss his hugs? The second was: who’s going to give me mine.

WARNING: We recommend practicing the kiss’n’hug on close friends first to avoid awkwardness.