This May, the inspiring, thought-provoking and all-round awesome TEDxUbud will be returning to Bali for its 6th edition, and this year, the theme “Make the Light” will be exploring new frontiers in total darkness.

From ghoulies, ghosties, and long-leggedy beasties, to things that go bump in the night, TEDxUbud is coming back to Bali this May and stepping into the dark! As the first event of its kind, taking place at nighttime at Setia Darma House of Masks and Puppets, TEDxUbud will be exploring philosophical, technological and scientific ideas around light and dark in a “Make the Light” theme, from astronomy, light-technology, and nocturnal animals, to stories that remain in the dark – eeek!

And to give you a taster of the weird and wonderful things to look forward to during “Make the Light”, the speaker lineup includes a mosquito whisperer, the inventor of the first commercial astronomy camera, a human decision scientist, the founder of one of Indonesia’s unicorn startups, a member of the BBC 100 Women list, a man who can bend light to his will, a band with a Rolling Stone Indonesia Top Album of 2016 credit to its name, and a shadow puppeteer who has taken the Balinese wayang tradition to new heights. Wowza.

So, in preparation of the event, you’ll want to gobble up as many carrots as you can because this twilight event will take you into darkness for what’s set to be the most unique TEDxUbud event we’ve seen to date.

And for you lucky Honeys, we’re giving away two tickets to one winner and a friend. To enter, simply head over to the competition post on our Facebook page for all the details! 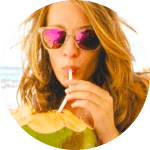