It’s been a busy first year for everyone’s favourite underground restaurant in Jimbaran, Cuca, since owner Chef Kevin Cherkas and partner Virginia decided to throw open the doors to a radically different dining experience in Bali, and literally fished their first patrons off the beach for their inaugural month.

With nothing more than sheer passion and a resume jam-packed with turns at some of the world’s better heeled eateries including La Broche, El Bulli, a tenure with Daniel Boulud in NYC and most recently at the helm of Singapore’s BLU, Kevin succeeded in reinventing what was fast becoming a rather stale dining scene on the island. Whilst other more established restaurateurs and chefs were happy to play the safe middle field and continue serving up their imported degustation menus night after night, a food junkie’s revolution was playing out in the deep south of Bali on the grounds of Kayumanis Villas.

Kevin’s well-executed, off the wall renegade approach, with a combination of ingredients and flavours that aren’t so much challenging as spellbinding, pair perfectly with the sourcing and usage of only the best local produce. 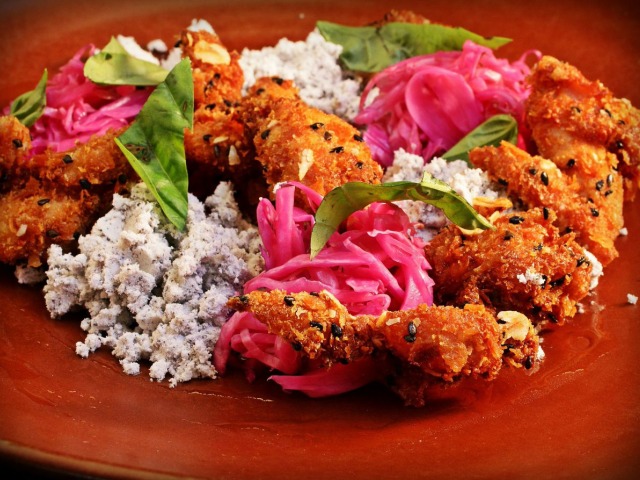 With the tapas formula already well installed in Bali, it’s no surprise that the playful creations originating from Cuca’s stylish kitchens follow suit, with every dish hitting the table (or the Food Bar which is as close to a chef’s table as you will find in Bali) in under fifteen minutes. You’re looking at three to five courses per person or opting for the four course set Chef’s Tasting Meal if you’re a newcomer who isn’t quite confident enough to order a la carte.

The menu itself features some really standout dishes including a sublime Glazed Young Carrot salad with whipped avocado, grilled mountain strawberries, cashews and lemon balm, the best piece of smoked fish we have eaten in Southeast Asia in the form of the Smoked Butterfish with beetroot yoghurt, avocado and wild fennel and the three ceviche offerings each presented with shaved flavoured ice and delicately matched micro herbs, and that’s just for starters. 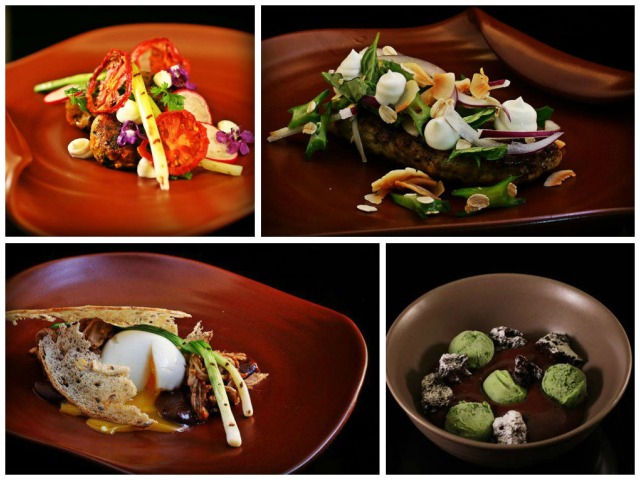 The main courses are prime chicha territory with obligatory beef, pork and chicken options or, you can play vegi-smart and opt for the pumpkin variety which happens to be the most flavoursome pick of the bunch. The Marinated Pulled Pork with soft-boiled egg, cinnamon raisin jam and charred long bean is devilish and the star of the show, the BBQ Octopus with Asian gazpacho, fresh apple, caramelized cauliflower and coriander, is impossible to circumvent on any visit.

What is exceptional with the menu is the amount of thought that has been put into every dish, every signature cocktail (try the reimagined Cuca G&T with homemade lime soda, gin and ginger blossom nectar or our recurring favourite the Iced Rose with hibiscus ice, brandy, wild honey and lemongrass) and especially the attention that is paid to the dessert menu where some real treats await.

Leave some space for Kevin’s reinterpretation of the classic After Eight Mint in the form of Cocoa 99 using warmed organic Pod chocolate, cocoa croutons and mint ice cream and the Strawberry Cloud Cake with pandan gelato and berry cream or opt for the crowd favourite Bali Breakfast of sweet runny mango, frozen passion fruit and whipped coconut. The newly opened outside courtyard seating is perfect for this time of year, dine indoors with groups in the spacious minimalist main room or get into the heart of the action at the Food Bar (recommended for nosy parkers and foodie couples).

Twelve months and a handful of changes to the menu later and Cuca has become a buzzword on the dining scene for ‘those in the know’ and those that Kevin pulled in from the beach himself are still coming back with new friends looking for a taste of Cuca. You’ve got to know you’re doing something right when Raymond Blanc shows up unannounced one evening then Tweets he’s just made the most exciting culinary discovery in recent memory, then appears again the following night.

See you at the Food Bar.

Join us for a Michelin-Starred Dinner in Ubud