BaliNale screened many inspirational and moving film last month, including a film telling the story of an Indonesia fisherman who survived the 2004 tsunami. Here, we chat to the man who produced the film everyone is talking about.

Last month was the annual BaliNale [Bali International Film Festival], which saw the screening of over 100 films from 31 countries of all genres, including the highly anticipated short film, ICHIRO and the WAVE, produced by a man considered to be one of the world’s most acclaimed digital pioneers.

Isaac Kerlow is an independent filmmaker and artist – born in Mexico but who has lived in Southeast Asia for over ten years.  Not only is he a film maker, but an animation expert who created the series of Earth Girl casual strategy games for people who want to experience and better understand natural hazards.  He also founded digital schools in New York City and Singapore, and was the author of the hugely successful book The Art of 3D Computer Animation and Effects.

A lot of the issues and subjects of his works are centred around change and the human condition, and ICHIRO and the WAVE is no exception as it tells the story of one of the 2004 tsunami survivors from Indonesia.  Here we chat to Isaac about his compelling short film that was a highlight at this year’s BaliNale, and his contribution to the digital film industry [including his work with Walt Disney!].

Your films and projects deal with change, abstraction, riddles and the human condition – tell us a bit more about the ethos behind your works.

I am interested in telling stories that can be understood by a variety of people, and that reach an international audience. I believe that audiences are smart and enjoy decoding stories that are not 100% digested and that require making connections between different layers.

Your film, ICHIRO and the WAVE, was recently screened at BaliNale.  What is the film about?

ICHIRO and the WAVE is a film about a man who was fishing on a boat off the coast of the Indonesian city of Banda Aceh when the 2004 Indian Ocean tsunami arrived and took hundreds of thousands of lives in just a few hours. This man followed his instincts of survival and managed to escape by a sliver of time, only to return to a shattered world.

What resonated with you the most about the fisherman or his story?

His honesty, and his matter-of-fact style. Also the fact that in spite of the horror and pain that he went through he managed to reconstruct his life.

Where can we watch Ichiro and the Wave?

For now, ICHIRO and the WAVE is being screened at festivals such as the Bali International Film Festival. It also screened at the Isle of Man in Europe and San Antonio, Texas. In the next couple of months it is scheduled to screen in other islands such as Cabo Verde in Africa, Cyprus in the Mediterranean, and Auckland in New Zealand. We expect to release it online in the middle of next year after it concludes its festival run.

You are considered a ‘digital pioneer’ – what do you think makes digital films and animation so great?

Good film and animation are excellent ways to tell contemporary and ancient stories. We can share our experiences and opinions through films and animations. Twenty years ago the concept of ‘digital’ or ‘digital media’ was exotic, today it is the most mainstream form of visual communication.

You have lived in Southeast Asia for over a decade, what is it you love about this side of the world?

Many of the modern societies and economies in this part of Earth are young and still developing, and that gives them uniquely dynamic while. Southeast Asia offers an interesting blend of traditional and contemporary, innovative and conservative at the same time.

You worked for over a decade at The Walt Disney Company in Los Angeles. What is your all-time favourite Disney film that you worked on, and why?

I really enjoyed the animated Tarzan (1999) because it was a great blend on innovative technology that was created to tell the story in a batter way. It also had great music and generally speaking I like the myth of the ape man who is basically innocent and savage at the same time.

Can you tell us something nobody knows about a Disney film you have worked on?

If I did, I would have to kill you…

You are currently the Artist-in-Residence at the Earth Observatory of Singapore. What are the goals of this program?

Our goal is two-fold. On one hand our job is to find innovative and engaging ways to communicate to a mainstream audience the scientific innovations and research that takes place at the observatory. On the other hand, we also create original works of art and storytelling that are inspired by natural hazards and the ways in which we are changing Earth and our natural environment.

What has been your favourite project to work at the Earth Observatory?

ICHIRO and the WAVE is one of my favourite projects because it is a story about natural hazards that transcends the pure science or issues of preparedness. ICHIRO is a story of incredible luck and survival, of hope and resilience, of facing a harsh reality and moving on. This short film is an inspiring metaphor for life: we all have face challenges and only those who never lose hope get to live some of their dreams. 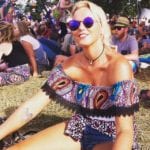 After spending most of her twenties living and breathing the London life as a writer and marketeer, Amy left the hustle and bustle of the city in search of palm trees, sandy toes and salty hair. Now residing in Bali, Amy spends her time exploring the magical island and writing about everything it has to offer.